Happy New Year, Sabo-bots and Sabo-cons!  Here’s hoping that 2019 brings us all health, happiness, and some truly memorable meals.

Yesterday I attended the soft opening of Orlando’s newest taco spot, MX Taco.  Chef-owner Ryan Manning started out cooking in kitchens across Mexico, and his specialty is cuisine from the Yucatan region.  He was the chef of the Mexican embassy in Washington, D.C. before he brought his expertise with authentic Mexican cuisine to our city.

We already have plenty of taco joints and Mexican restaurants to choose from, and some of my favorites include Tortas El Rey, Francisco’s Taco Madness, and Hunger Street Tacos.  But the good news is that they provide something to satisfy everyone.  None of these restaurants are exactly alike, and they all have unique specialties, strengths, and weaknesses, so there is room for all.  Besides, tacos are tasty!

MX Taco is a tiny little spot on Bumby Avenue, near Lou’s Lounge and Saigon Noodle and Grill, with Stasio’s Italian Deli & Market across the street.  There are only four tables (three of which are high-tops), and you order and pay at the counter.  For the soft opening, Chef Manning wasn’t offering every single item on their exciting menu, but most of them were available, and I tried everything I could. 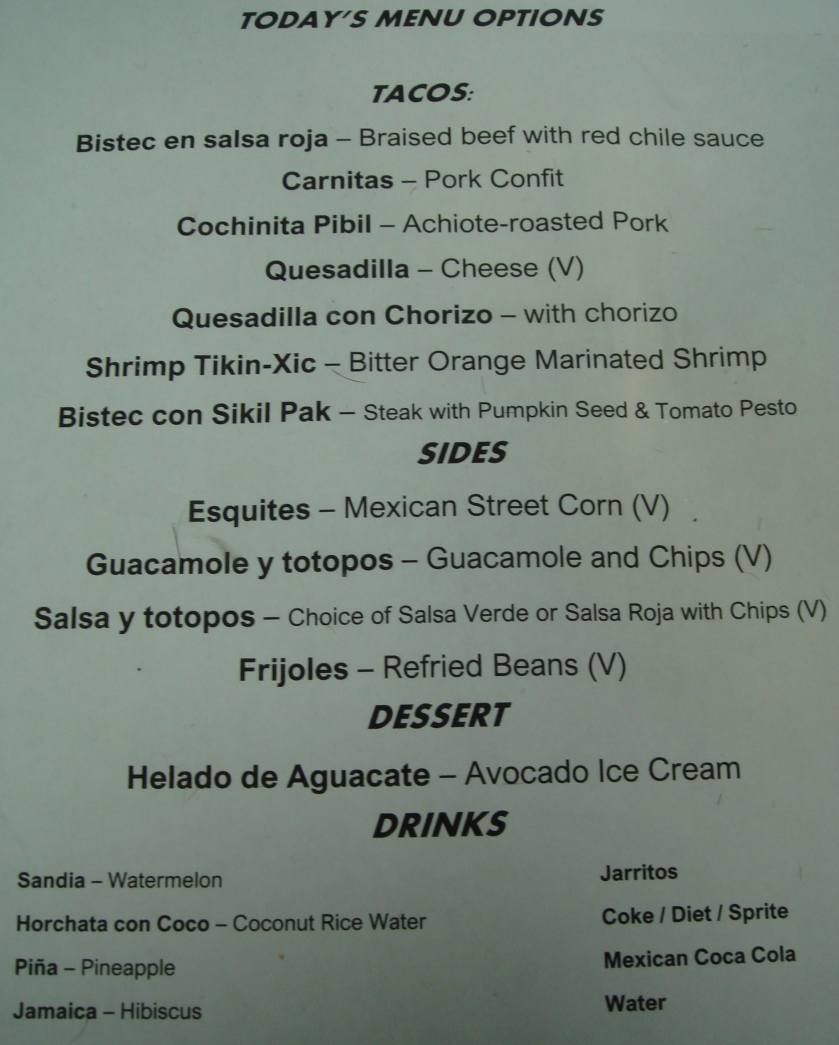 I absolutely love that MX Taco’s menu is a map of Mexico, showing you which region each individual dish comes from.  I’ve never had the opportunity to travel to Mexico, but I love geography and how food influences and is in turn influenced by geography, economics, and culture at large.  It’s rare when you can order food at a restaurant and learn something at the same time. 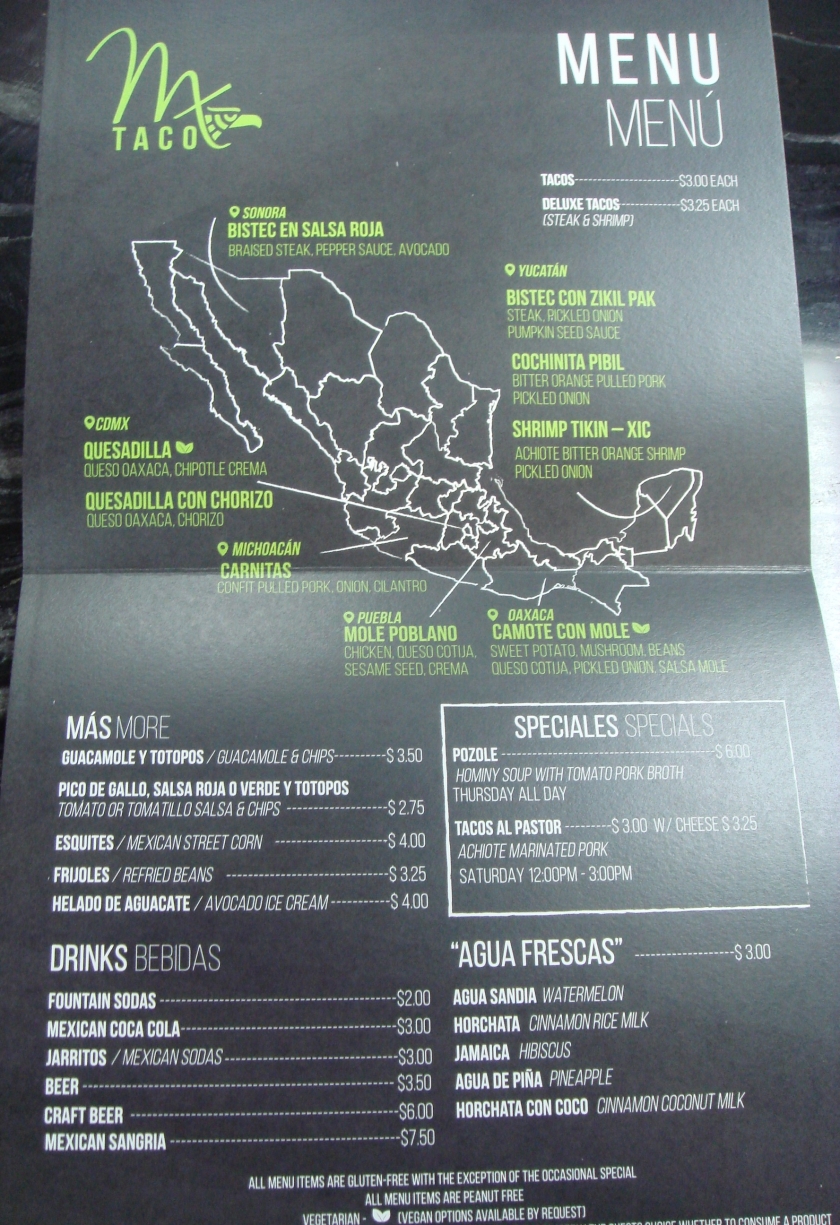 Prices are extremely reasonable, since you order tacos and other items individually — everything I ordered was either $3, $3.25, or $3.50.

At the restaurant, I ordered the cochinita pibil taco (pulled pork with bitter orange and pickled onion from the Yucatan region), the bistec en salsa roja taco (braised steak with pepper sauce and avocado from the Sonora region), the quesadilla con chorizo (Oaxacan cheese and crumbled chorizo sausage from Mexico City), and a piña (pineapple) agua fresca, a sweet, cold, refreshing drink made with fresh pineapple and surely plenty of sugar.  The food came out quickly, and everything was delicious. 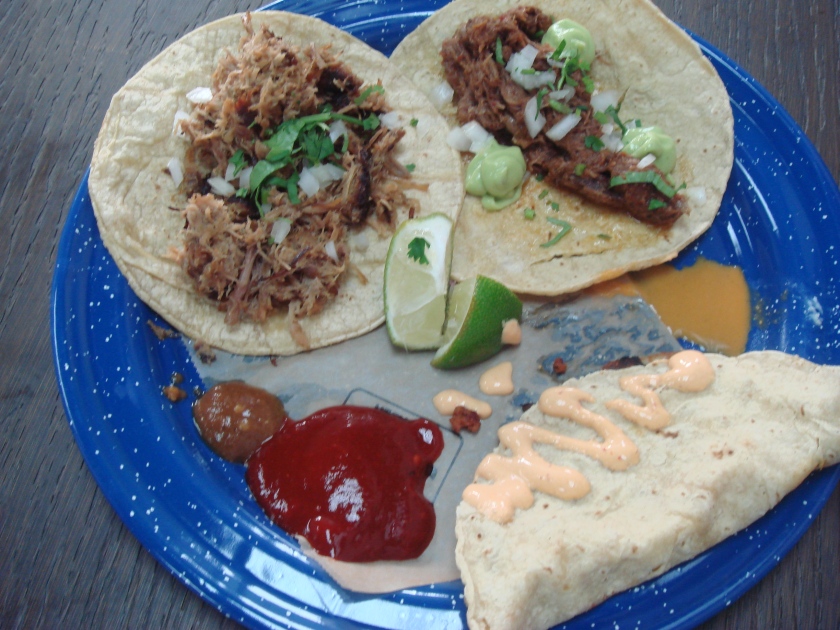 I love cochinita pibil (sometimes referred to on menus as puerco pibil) and order it whenever Mexican restaurants offer it, which isn’t often.  I always think back to the cheesy action movie Once Upon a Time in Mexico, where Johnny Depp’s corrupt CIA agent ordered puerco pibil everywhere he ate, in a quest for the best version of the dish.  When he finally found it, he went into the kitchen and shot the chef to “consecrate the moment.”  It’s a good thing that was a fictional movie (and even better that the real Johnny Depp is somewhere far, far away from us), or otherwise Chef Manning might have been in danger!  It was so fresh and so good.  The chorizo in the quesadilla was excellent as well, and I’m a big chorizo fan too.

They have three housemade hot sauces available in bottles on the tables.  From left to right: a medium arbol chile sauce that is orange, a mild guajillo pepper-based sauce that is thick and dark red, and a fiendishly-hot habanero sauce.  The Guajillo was my favorite.  Habanero is usually too much for me, but I had to try it, and I appreciated that it packed a lot of flavor (a bit fruity, in fact!), rather than just painful heat like too many sadistic sauces. 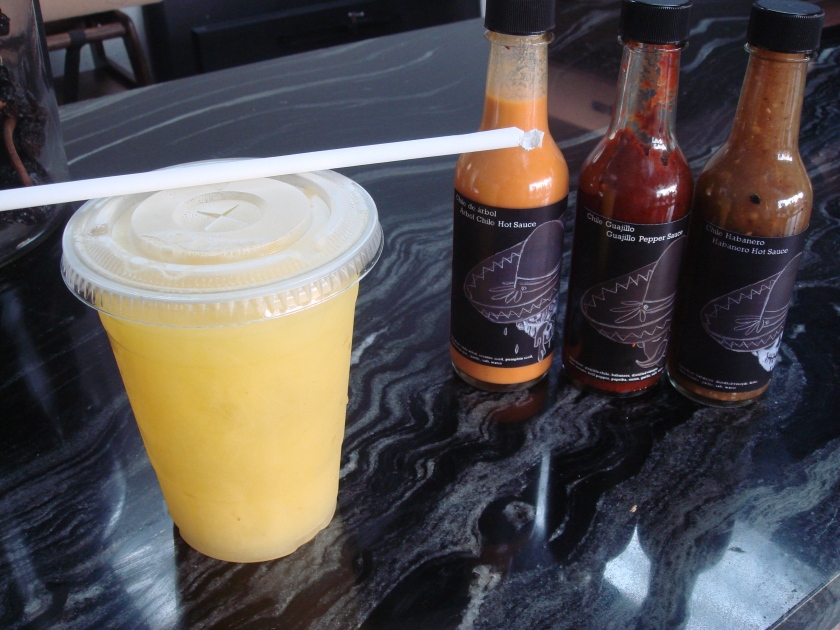 I placed a takeout order to bring some food back home to my wife, and while I waited, Chef Manning insisted I try his avocado ice cream.  It was very smooth, soft, and creamy — not icy or chunky at all.  It tasted so much better than you’d ever expect avocado ice cream to taste, and I say this as someone who loves ice cream and avocados.  It was topped with pepitas (pumpkin seeds, possibly lightly toasted?), toasted shredded coconut, and dark chocolate shavings.  It was a small cup, but I highly recommend it to anyone who dines at MX Taco, as it was a nice palate cleanser and worked well for cutting any lingering heat. 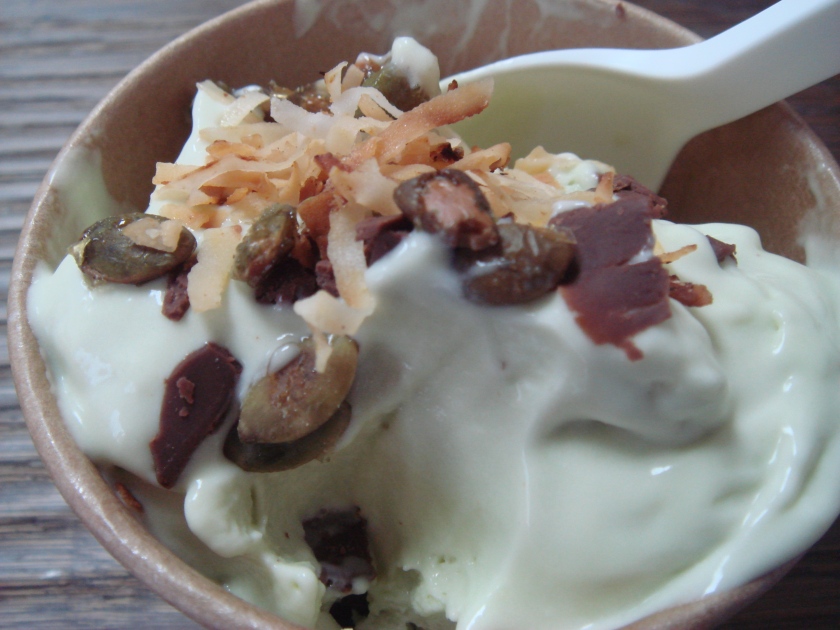 My wife insisted on letting me sample all the food I brought home for her: a carnitas taco (confit pulled pork, onion, and cilantro from the Michoacan region), a bistec con sikil pak taco (steak, avocado, pickled onion, and pumpkin seed sauce, which I asked for on the side, from the Yucatan region), a quesadilla (with Oaxacan cheese and chipotle crema, from Mexico City), and an order of totopos (chips) and guacamole.  The guacamole was excellent, I have to say.  Extremely fresh — some of the best I’ve had anywhere around here, including more upscale Mexican restaurants that make a big production of “tableside guac.”  It was a nice-sized serving of guacamole, too.

I also got her an horchata con coco agua fresca, rice water sweetened with sugar, cinnamon, vanilla, and coconut — some of her favorite flavors in one drink, and an ideal heat-cutter.  It was the thickest and richest horchata I’ve ever sampled, that’s for sure.  I love aguas frescas, but a lot of them are made from sugary powdered mixes, not that dissimilar from Kool-Aid.  I could tell both my pineapple drink and her horchata were very fresh.

It should go without saying that everything is made fresh in-house.  The only exception are the tortillas, corn tortillas Chef Manning told me he gets from a tortilleria in Atlanta.  I almost hate to admit it, but I prefer flour tortillas, and I’ve never had quesadillas on corn tortillas before.  The totopos looked like they might have been made from the same corn tortillas.  I thought they could have used some salt, but the guac was good enough to offset that.

Orlando taco lovers, I encourage you to make it over to MX Taco sooner rather than later, to try the newest taqueria in town and see how it stacks up to your established favorites.  I guarantee it will be different enough from the tried-and-true taco joints that you’ll appreciate having it as one more option.  Just FYI, Chef Manning told me he will be closed today (Friday, January 4th) and open for limited hours over the next week: 4:00 to 8:00 PM, starting tomorrow, Saturday the 5th.