It feels like a while since I wrote my last review here, and I have a few more in the pipeline.  But this one is about a hidden gem here in Orlando, on Curry Ford Road: Theo’s Kitchen (https://www.theoskitchen.com/).  It’s in an older, nondescript shopping strip near a Winn-Dixie supermarket, and you might not know it’s there at all unless you’ve been hipped to its existence.  Consider yourselves hipped.

Have you ever craved really good, crispy, tender, juicy fried chicken, but also been dying for Greek food?  Has that ever happened to you too?  Well, you’re in luck, because Theo’s serves what has to be my favorite fried chicken in the Orlando area (The Coop is very good, don’t get me wrong, but not quite as consistent as it used to be), plus they have a whole menu of Greek specialties, when you can’t decide or when you just want to treat yo’self and have it all.

I’ve been to Theo’s twice this summer since discovering it, once again thanks to the local gourmands, connoisseurs, and aficionados on the Orlando Foodie Forum on Facebook.  On my first visit, I met a fellow Foodie Forumite there, a really good guy who is always visiting and recommending restaurants around town.  I’ll name him if he’s okay with that, but for now, better safe than sorry.  GREAT guy with good taste and a never-ending thirst for adventure, culinary and otherwise.

On that visit, I ordered a gyro (because there’s no such thing as a bad gyro, am I right, you guys?), a chicken thigh so I could sample the legendary fried chicken, and an order of onion rings, because THAT’S RIGHT, THIS IS ANOTHER INSTALLMENT OF RING THE ALARM!  (AIR HORN!)  My friend ordered the gyro king (same thing but with feta cheese added), a Greek salad, and chicken and rice soup.  The gyro was very good, and the onion rings were the kind I love, with a nice beer batter coating, the ideal thickness and consistency. 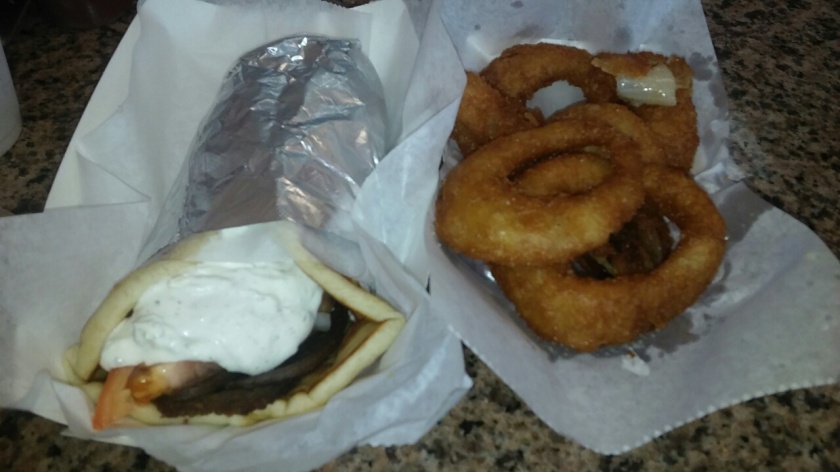 My friend seemed to love all of his food, and the salad was definitely beautiful.

I don’t mean to downplay any of that, but the chicken thigh was excellent.  The crispness was so perfect, but it was almost all in the skin, rather than a heavy, greasy layer of breading or batter.  It was very moist and juicy.  There wasn’t a lot of seasoning on the chicken — The Coop and even Popeye’s season their fried chicken more — but it didn’t need it, seriously.  Theo’s website says “Our Special method of broasted pressure frying in peanut oil makes your Fried Chicken light, evenly cooked and full of naturally delicious flavors.”  (See https://www.theoskitchen.com/menu.)

Wait a minute, Mr. Saboscrivner, Sir, you might be thinking.  “BROASTED”?  Is that a typo?  How unlike you!  Is that even a THING?  No, I promise, I copied and pasted that directly from the Theo’s Kitchen website and cited my source (always cite your sources, folks), but it is a thing.  It’s essentially fried chicken that is also pressure-cooked while it’s fried, prepared in special equipment made by the Wisconsin-based Broaster Company.

Because I am a serious food blogger and a researcher by trade, I dug a little deeper to investigate broasted chicken, since now I’m invested, and I’m sure you are too.  Here’s a 2004 Washington Post article all about broasted chicken:
https://www.washingtonpost.com/archive/lifestyle/food/2004/04/21/this-chickens-not-roasted-broiled-or-fried-its-broasted-good-luck-finding-it-though/63ba6fe5-6af4-45bc-b0c3-8a8b26d8ea87/?utm_term=.b0f7e26c53b9

And a shorter Atlas Obscura article, for the “TL,DR” crowd (although I can’t imagine any of them would still be sticking around my blog!):
https://www.atlasobscura.com/foods/broasted-chicken

So anyway, it was awesome.  I’ve never had fried chicken quite like it before, but I think it cracked the code for the perfect blend of flavor, freshness, texture, and lack of heavy, nasty, slimy greasiness.

I went back to Theo’s Kitchen more recently with one of my co-workers, who was kind enough to treat me to lunch, even though I had every intention of treating him that day.  What a blessing it is to have good co-workers, since that can make or break so many jobs.  He ordered a two-piece meal with a breast and a thigh, with some nice, crispy, crinkle-cut fries, and an order of fried mushrooms, which I cannot eat (but I was nice enough to take a picture of them for you).

I had another spot-on perfect broasted chicken thigh: 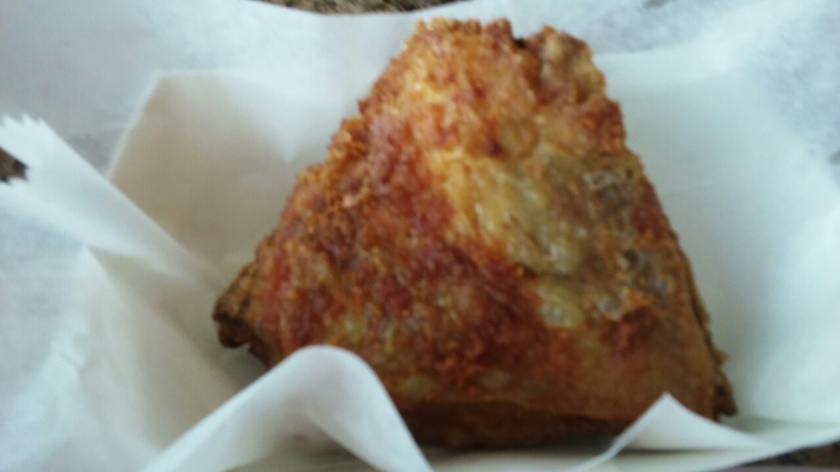 Also, because I was craving pasta and haven’t had this in years (not since my beloved Patsio’s Diner in Casselberry closed), I ordered pastitsio, which is like a Greek version of lasagna.  It is a casserole of uncut ziti noodles and a rich, tomatoey sauce with ground beef and what had to be a fair bit of cinnamon.  (This makes sense, because I love Cincinnati-style chili, originally a recipe of Greek immigrants that is made with cinnamon and served over spaghetti.)

The pastitsio even came with one of their beautiful Greek salads, and they were very generous with the feta: 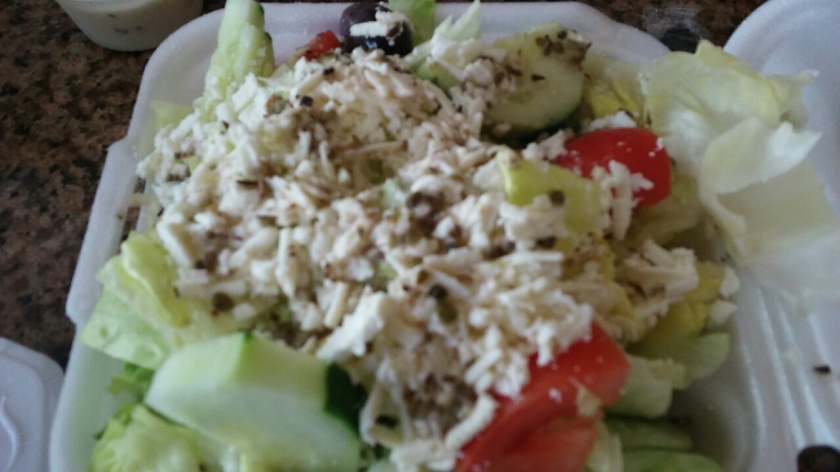 So Theo’s Kitchen is a casual little place in a strip shopping center that looks like hundreds of others, the kind of restaurant you could drive by every day and never notice, or live your whole life in a city and never know about.  It is an open room with lots of little tables and natural light from a big glass storefront window overlooking the parking lot.  Maybe not anyone’s idea of a “sexy date night” restaurant, but a fine choice for any occasion.  It has it all!  Greek food?  Check.  Greek food is good, and often healthy, and there aren’t a ton of Greek restaurants.  Fried chicken is good, and not healthy at all, but it’s dry and disappointing too often when you get it from fast food chains and supermarkets.  Not so at Theo’s Kitchen, where you get the best of both worlds.