Meng’s Kitchen (https://www.mengskitchensorlando.com/) is one of my favorite kinds of restaurants: a bit of a secret because it’s a restaurant inside something else — in this case, inside another restaurant, U-Roll Sushi on East Colonial Drive, directly east of Goldenrod Road (which I really need to review some other time).

When you crave Chef AJ’s eclectic comfort food with origins in China, Thailand, and India, you have to place an online order on the website above, then pick it up from U-Roll Sushi or make a note that you’re going to eat it there, as I did recently.  I met one of my closest foodie friends here in Orlando, a true bon vivant who knows even more good local places to eat than I do, and also one of the most upstanding, civic-minded, honorable people I know.  He has been a Meng’s mark for a while now, and I was glad to finally catch up with him over lunch on a workday, to see what all the hype was about.  This guy has never steered me wrong, and he definitely helped me choose wisely this time.

This is Chef AJ’s famous Hainanese chicken and rice ($10) — poached chicken served over Hainanese style rice pilaf with the most amazing ginger, garlic and soy dipping sauce.  The online ordering system gives a choice of white or dark meat, and I will always choose dark meat, 100% of the time.  It came boneless and fully sliced, with the soft skin on.  It also came with a side of broth that I forgot to photograph.  It looked like plain broth, just like this looks like plain chicken, but looks are deceiving, because everything had so much incredible flavor, I was blown away. 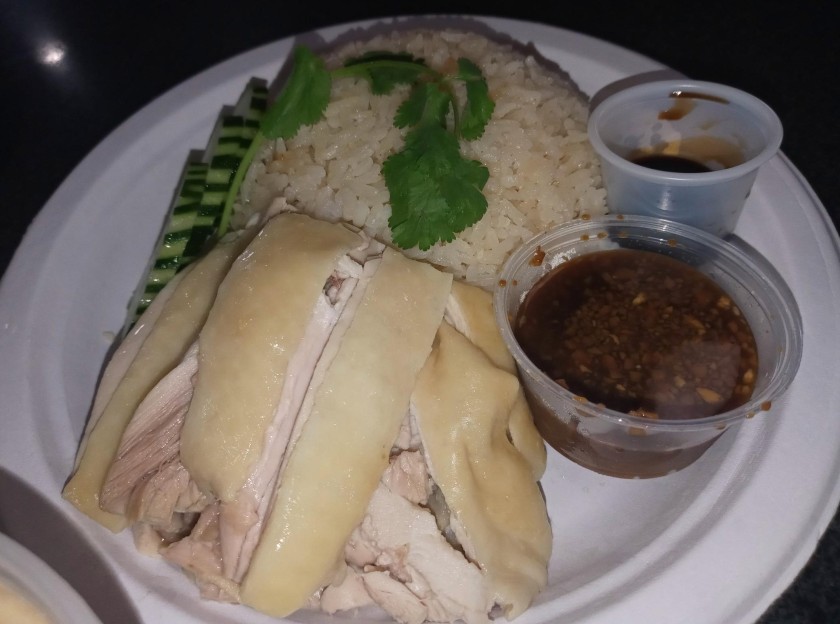 My wise and worldly friend chose the chicken, so I had to make a decision.  With so many intriguing and unfamiliar options, I chose the braised pork Hunglay curry ($10) — marinated pork belly and pork shoulder with toasted garam masala, slowly braised with Hunglay curry paste, shallots, pickled garlic, fresh mango and ginger, and tamarind paste.  It was one of the best things I’ve eaten all year, so I chose wisely too.  Every piece of pork was tender enough to cut with our plastic forks, and they just melted in my mouth.  I’m such a fan of saucy, braised meats, and this was an outstanding dish, full of strong flavors I wasn’t overly familiar with, but they all worked so well together.

The online menu said this braised pork curry came with steamed jasmine rice, but I requested a substitution of the spiced yellow rice that came with some other dishes, and I noted that it was okay if Chef AJ couldn’t substitute it.  Well, he did, and the spiced yellow rice was triumphant as well.  I have a rice cooker at home, and I can still NEVER cook rice as well as Asian and Latin restaurants.  But both this rice and the Hainanese rice pilaf that came with the chicken were something really special.  Spooning some of the pork curry sauce, which was savory but not spicy at all, over both kinds of rice opened up whole new worlds of flavor. 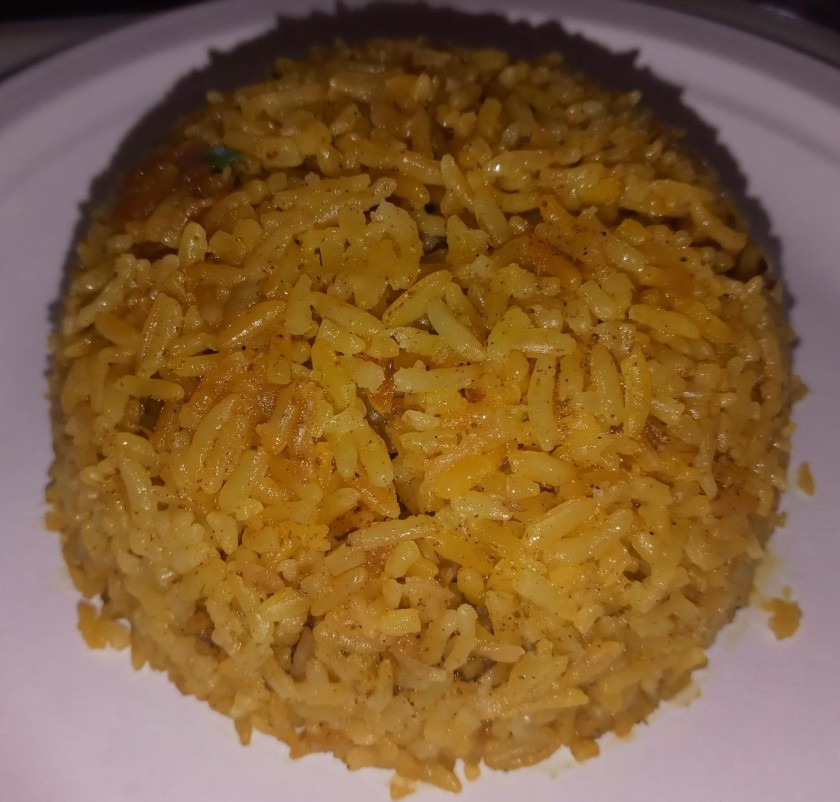 My friend ordered this cucumber salad ($4) for us to share — chunks of cucumber and tomato and thin slivers of red onion in Thai sweet and sour dressing.  It might not have occurred to me to order this, but I’m so glad he did, and I’d get it again.  It was crisp and crunchy and sweet and spicy and cool and refreshing, especially with the heavy chicken, pork, and rice and the rich sauces they came with.  The sweet and sour dressing reminded me of Thai sweet chili sauce, a beloved condiment, but not as thick, sticky, and jelly-like.  True to its name, there was also a sour, slightly pungent component in the dressing that played well with the cucumbers. 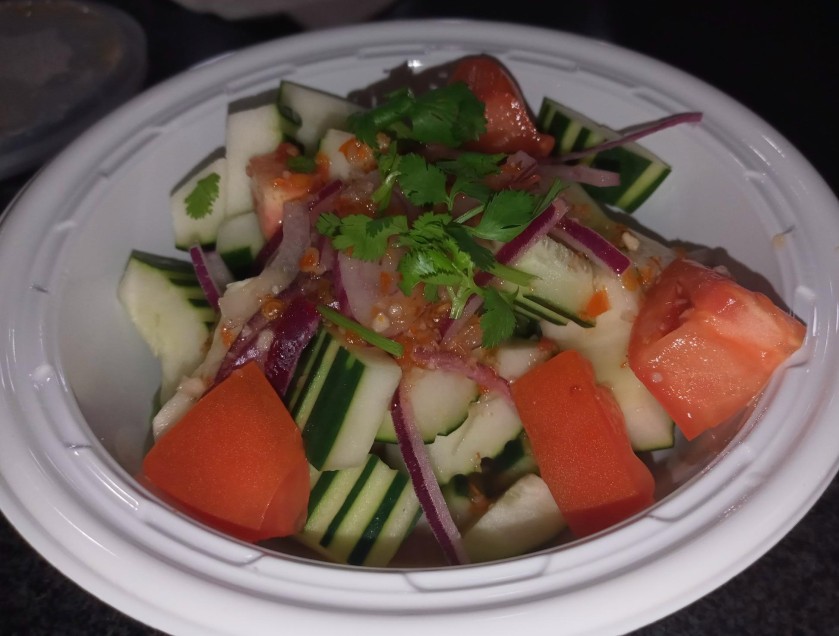 My friend also ordered tom kha gai ($5), a Thai soup made with coconut milk, curry paste, lemongrass, kaffir lime leaves, and big ol’ chunks of mushrooms, which I cannot eat.  Normally I like to try everything, but I am allergic or intolerant or something.  It always ends badly for me, so I passed.  But the soup looked and smelled good, and he seemed to like it.

So far, this was my only visit to Meng’s Kitchen, but I need to return sooner rather than later for more Hainanese chicken and rice, more of that incredible braised pork Hunglay curry, and to eventually make my way through the menu and try everything else (as long as it doesn’t contain mushrooms).  It was terrific — one of those hidden gems that are all over Orlando, if you just give them a chance. 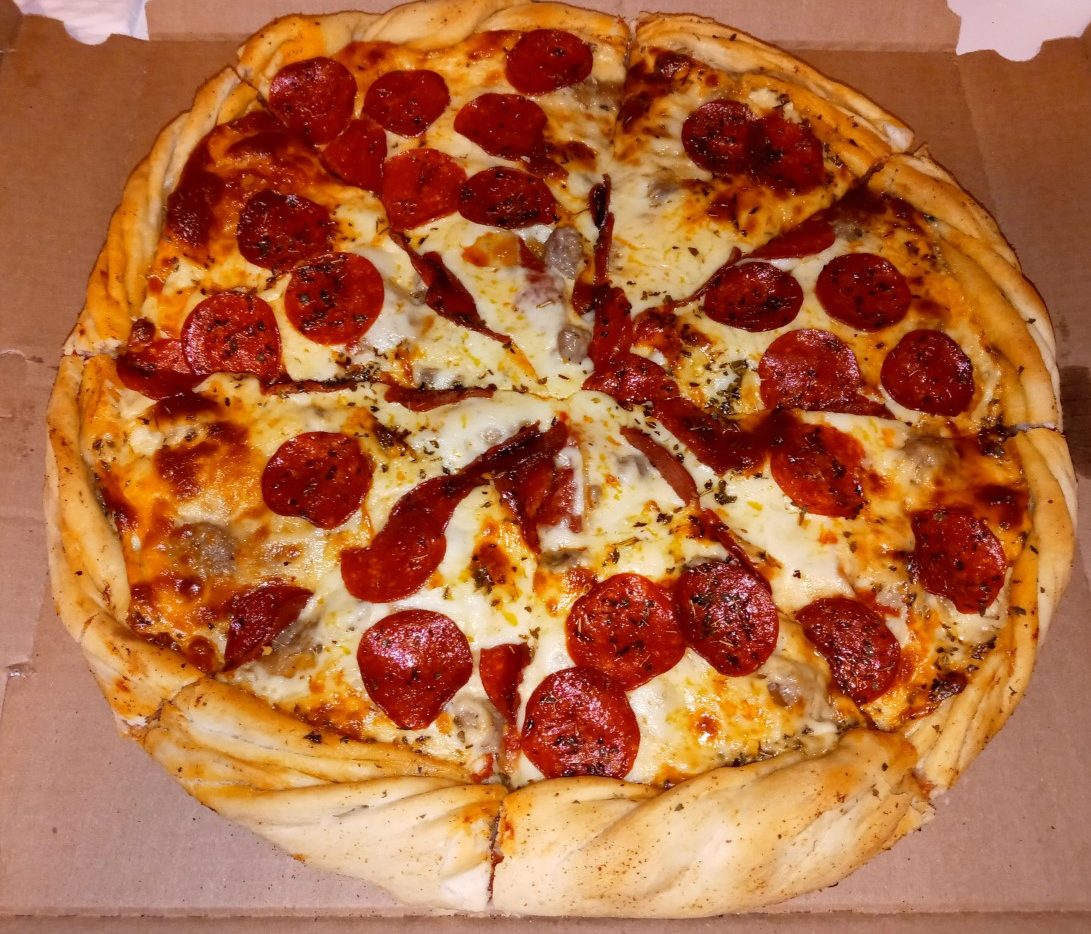 When something is underground, that automatically makes it cooler, hipper, edgier.  Think of underground comics (or “comix,” if you really want to be underground), or underground parties or concerts.  Not everyone knows about them, so you’re automatically cooler, hipper, and edgier if you do.  So if you’re in the mood for high-quality, local pizza, delivered fresh to your doorstep, Orlando’s hottest pizza is Brad’s Underground Pizza (https://www.instagram.com/brads_underground_pizzeria/).  You order by sliding into the DMs on Brad’s Instagram page (that’s what the kids say, right?), and Brad himself will deliver it to you, within a 15-mile radius of Maitland.  He accepts Venmo (which I don’t have) and cash, but no credit cards at the moment, so keep that in mind too.  There is no pickup from a location at this time due to COVID concerns, so even though I actually like picking up takeout and rarely have food delivered, this was one time where I didn’t have a choice and really didn’t mind.

This is the double-decker pizza (normally $16, but we added pepperoni and sausage for $1 each).  Brad also serves Chicago-style deep dish pizza (also $16) and thin crust pizza ($12), but the double-decker sounded the most unique, and was definitely the prettiest on Instagram due to the braided crust.

The double-decker pizza is literally two thin-crust pizzas stacked on top of each other, connected by that beautiful soft braided crust.

Here’s a cross-section, so you can see the two thin-crust pizzas stacked on top of each other, with a rich, robust red sauce in between.  I get annoyed that the sauce is usually the pizza ingredient that gets short shrift — there’s either not enough sauce, or it’s an obvious afterthought, or both.  But Brad’s pizza was saucy, and it was nice to have a bit that dripped out to dip that gorgeous crust into.

I do want to caution you that Brad’s Underground Pizza is blowing up right now, so plan to place your order in advance.  I don’t mean an hour in advance, but maybe a day or two in advance.  Consider placing an order for your Sunday game day pizza party on Friday, just due to demand and delays.  I was very lucky to get my pizza delivered the same night I ordered it, but that was thanks to a friend interceding on my behalf — a friend who is much cooler, hipper, and edgier than I, who had already discovered Brad’s incredible pizza and was a repeat customer.  Now that I’m part of the underground scene, I intend to become a regular as well.

Eventually, due to hype and buzz, so many underground movements end up hitting the mainstream, influencing mainstream culture and changing it for the better, and Brad’s pizza is far too good to stay a purely underground phenomenon for long.  I have to admit, it’s kind of nice to have someone bring you your food, after a lifetime of making it or going to get it.  I guess Ben Folds was right: “We can be happy underground.”