I’m not a great bowler, so because I’m not great at it, I never really enjoyed the experience of bowling.  I remember going to kids’ birthday parties at bowling alleys and slinking off to play video games in the arcades, to spare myself some public humiliation at a formative age where everything felt like public humiliation.  This was my usual schtick at even more depressing parties at the roller skating rink when we were a few years older, back when Miami booty bass and freestyle music blared from the speakers, the soundtrack to everyone (except me) starting to kiss.

Of course, this was still during a golden age of arcade video games, back when nobody thought twice about touching things in public places that everyone else had been touching, and there were no hand sanitizer or wipes anywhere.  So as a result of arcades falling out of vogue and being a grown-ass man who avoids awkward social situations as a matter of course, I haven’t been to a bowling alley in over a decade.

Well, I am also a grown-ass man who loves sandwiches and potato chips, as stalwart Saboscrivnerinos know too well.  I recently learned of the existence of Cowboy Food & Drink, a restaurant in the perhaps-tellingly named Chagrin Falls, Ohio, that serves barbecue and American food.  They spun their concept off into Cowboy Dips & Chips (https://www.cowboyfoodanddrink.com/dips-and-chips), which serves a selection of sandwiches with au jus dip and fresh, house-made potato chips at bowling alleys, including two right here in Orlando.  They even donate a portion of the proceeds to charities!  I was intrigued, so last night I went to Aloma Bowl in nearby Winter Park on my way home from work.  Here is the menu for the Brooklyn South Bar, the snack bar at Aloma Bowl, which includes the new Cowboy Dips & Chips: https://www.alomabowlingcenters.com/aloma/food-drinks/.

As you can see, they offer two kinds of sandwiches on “butter-toasted rolls”: pastrami and roast beef.  Of course I had to try them both, and because I am a good husband, I brought one of each home for my wife as well.  They were both a good value, with lots of meat.  Of the two, the pastrami ($10) was much better, with lots of delicious fatty marbling, but not too much.  Here was mine.  I paid a 75-cent upcharge for grilled onions to try theirs, even though I had some at home, and I got creamy hot mustard on the side, to compare it to the multitude of mustards in my mustard collection.

My wife had her plain pastrami sandwich for lunch today.  It heated up well in our little toaster oven, and she enjoyed it: 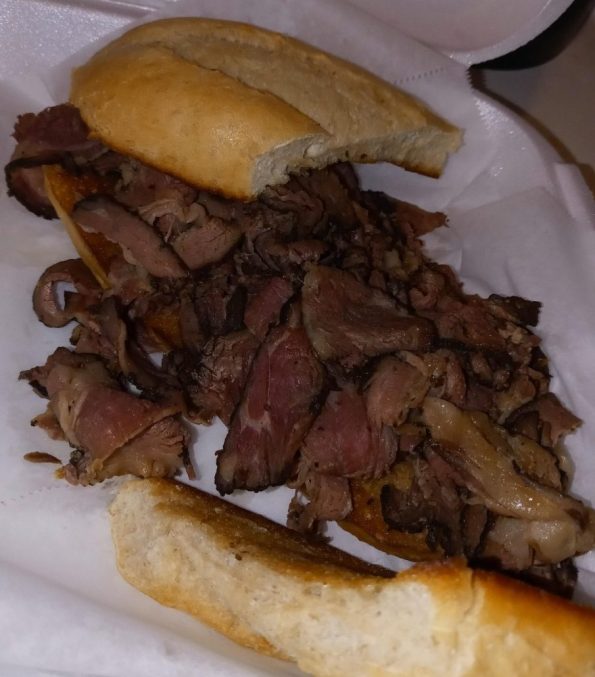 I also got us each a roast beef sandwich ($8), and I paid a 75-cent upcharge for Swiss cheese on mine, and got pickles and creamy horseradish sauce on the side.  It was honestly just okay, and I wouldn’t get it again.  I love a good roast beef sandwich, but I would have preferred the roast beef to be a lot more rare, with more seasoning.

My favorite deli roast beef is Dietz & Watson London broil, which you can buy at the deli counters at Winn-Dixie and Sprouts.  That stuff is the best, and I highly recommend it to all.  My wife and I are also suckers for a classic roast beef sandwich from Arby’s or our local legend Beefy King.  This looked more like “real” shaved roast beef than Arby’s or Beefy King, but didn’t have as much flavor.  It wasn’t as salty as those, and it was sliced thicker, so it wasn’t as tender as I would have liked either.

As much as my wife agreed with me that the pastrami was good, she didn’t care for the roast beef either, so we ended up with a spare.  (Bowling!)  I finished her plain sandwich for lunch today, warmed in the toaster oven with muenster cheese and onions I had sauteed myself, then doctored up with some of my favorite mustard and pickles.  That improved it immensely.  But here it was last night, still warm when I got it home:

Each of the four sandwiches came with a large plastic cup of au jus.  I’m not usually a fan of a WAS (wet-ass sandwich), and probably wouldn’t choose to dip if I was eating at the bowling alley, just to avoid making a mess.  I tried dipping the roast beef sandwich last night after changing out of my work clothes, but it didn’t add much to the flavor aside from salt, and made those good rolls wet and gushy.  But I can’t bear to dump these out — I am totally going to figure out something to do with the au jus. 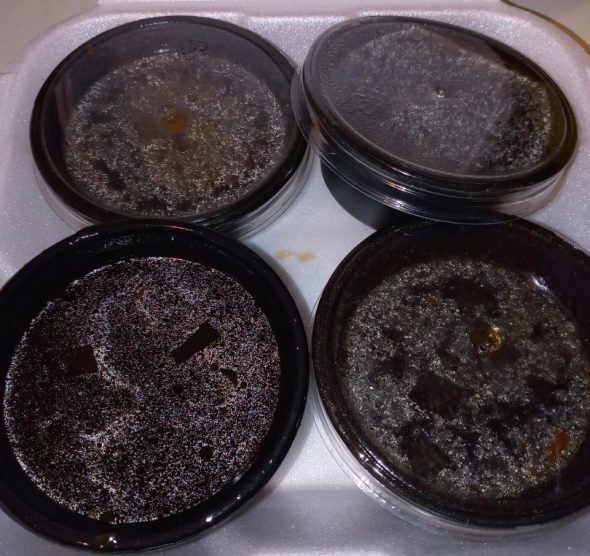 I also got three orders of the house-made chips ($2 each), since they had three flavors to choose from: salted, BBQ, and salt and vinegar, which I always call “salty Vinnies.”  My wife only likes plain chips, but she really enjoyed these.  They had a fantastic texture, a good crunch without being too hard, and weren’t greasy at all.  I was a little worried because the BBQ and salty Vinnies didn’t look like they were covered with much flavor seasoning, but they tasted great.  The salty Vinnies in particular were delicious, and I would love to get some of that vinegar powder to use for different things at home, since I already have a huge vinegar collection to rival my mustard collection. 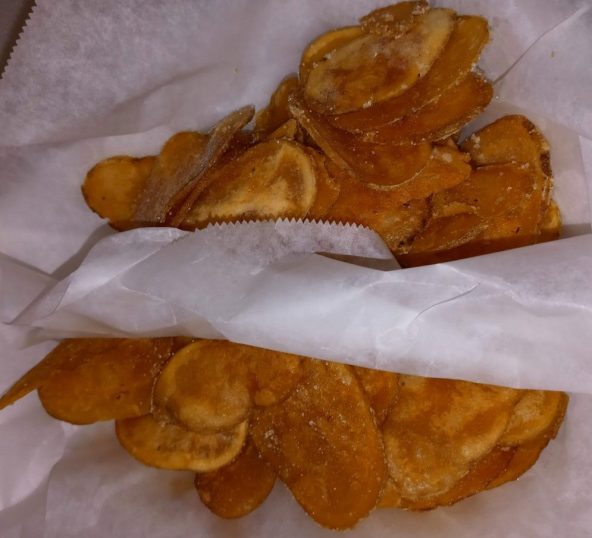 Finally, since I was already buying four sandwiches and three orders of potato chips at a bowling alley after a long day of work, I got an order of funnel cake fries from the regular snack bar menu ($5).  They were a little crispy on the outside, soft in the middle, warm, and sweet, just like you would expect and hope for.  They reminded us both a lot of the old Burger King French toast sticks from their breakfast menu in the ’90s (and possibly still; I haven’t gone to Burger King in many years). 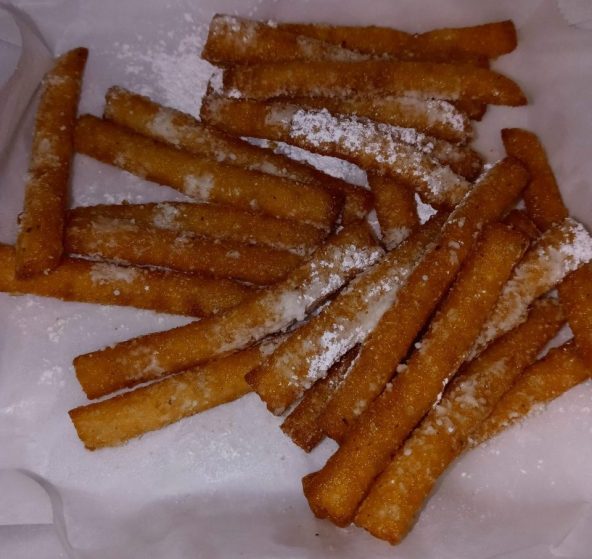 It might seem counterintuitive to go to a bowling alley snack bar in search of good food, but if you’ve been reading my blog or anything I’ve ever written about food, you know I’m on the lookout for a good meal anywhere, and it’s amazing where you can find it if you’re willing to look.  Some of my favorite tacos and Nashville hot chicken come from local food trucks, my absolute favorite barbecue came from a gas station convenience store up until very recently (stay tuned for an update on that!), and one of my favorite restaurants in Orlando is a stall in a food court inside a Korean supermarket.  So why not a bowling alley snack bar?

I can appreciate upscale luxury, but I don’t always feel comfortable paying for it (especially since I’m still not dining in at any restaurants anytime soon), and I’d always rather take a gamble on something delicious, casual, and cheap, especially when it’s off the beaten path.  Those treasures that require a little hunting are often the most satisfying to find.  And while the roast beef sandwich was just okay, my wife (a tougher food critic than I) agreed with me that the pastrami sandwich and the chips were quite good, better than some standard restaurants.  The staff was great too — friendly, fast, all masked.  Just knowing there’s one more place in Orlando to get a decent pastrami sandwich and some house-made chips in different flavors makes me feel like all hope is not lost.