I recently learned about the existence of Corfu Greek Restaurant (https://www.facebook.com/CorfuWinterSprings), located at 124 State Road 434 in Winter Springs.  When my wife and I were playing the interminable game of figuring out what to eat on a weekend not that long ago, I suggested Greek food and sent her the menu photos from Corfu’s Facebook page.  It sounded good to her (huzzah!), so I placed a large order to ensure we had enough food to get us through the weekend and even the first day or two of the coming work week.

I took the liberty of scanning Corfu’s menu.  You may want to right-click on these menu pics and open the images in a new tab, to read them in a larger size.

I loved the interior of the restaurant.  The blue walls, all the artwork and photographs of Greece highlighting its beautiful blue seas, and the blue and white retro-looking booths created a cool, welcoming atmosphere.  The two-tone booths reminded me of a gorgeous 1950s automobile, like a ’57 Chevy Bel-Air, which made me think of a classic diner setting.  And I LOVE diners!  I ordered our food to go, but would not have minded hanging out there.

By the way, I picked up our order around 3:30 PM on a Saturday, which is why these booths are empty.  There were some diners on the other side of the restaurant, but I didn’t want to be a creeper and photograph them in their booths.  I met the lovely Rita, one of the owners, who was very sweet and welcoming, especially when I mentioned this was my first time ordering from there.  Corfu opened eight years ago, so better late than never.  And we ordered so much, to make up for lost time!

This first photo is the dish that made my wife agree to try Corfu: the charbroiled octopus appetizer ($17.99).  I’m not a huge octopus fan, but it is one of her favorite foods, and she proclaimed this might be her new favorite octopus dish anywhere.  It was marinated in olive oil and vinegar — I’m guessing red wine vinegar, but I could be wrong.  I did try one bite of one of the thicker tentacles, and it was remarkably tender, when so many places serve it on the chewy side.  She was in heaven after this dish.

She also requested the fried calamari appetizer ($12.50), but I ended up liking these crispy squid rings more than she did.  They went really well dipped into the little cup of marinara sauce that was included. 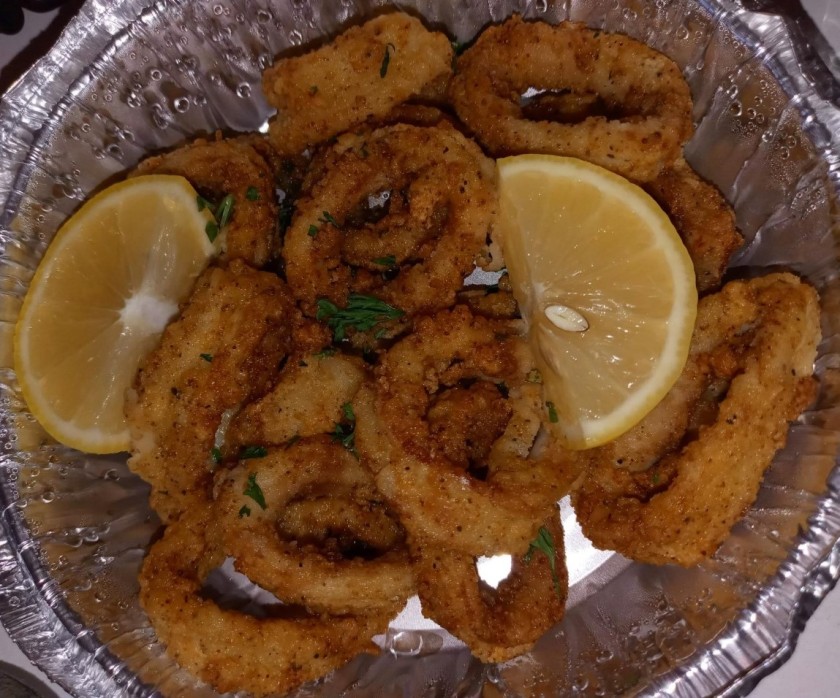 I definitely give Olympia Restaurant the edge for fried calamari from Greek restaurants in Orlando, but these were good, don’t get me wrong!

I’m a big fan of sampler platters, especially when I’m visiting a new restaurant for the first time.  I love trying new tastes and new dishes, especially to find out how a particular place handles an old favorite.  So I was drawn to the Corfu Platter ($21.95), where diners can choose three options.  I went with three things I thought both of us would enjoy: gyro meat, roasted lamb, and moussaka.  Other options included spanakopita and one of my favorite Greek dishes, pastitsio, which is like a Greek version of lasagna, but made with long, uncut macaroni similar to ziti and topped with a bechamel sauce.  But I know pastitsio isn’t my wife’s favorite, and I had homemade lasagna in the fridge, so I went with three safe choices I knew she would like too. 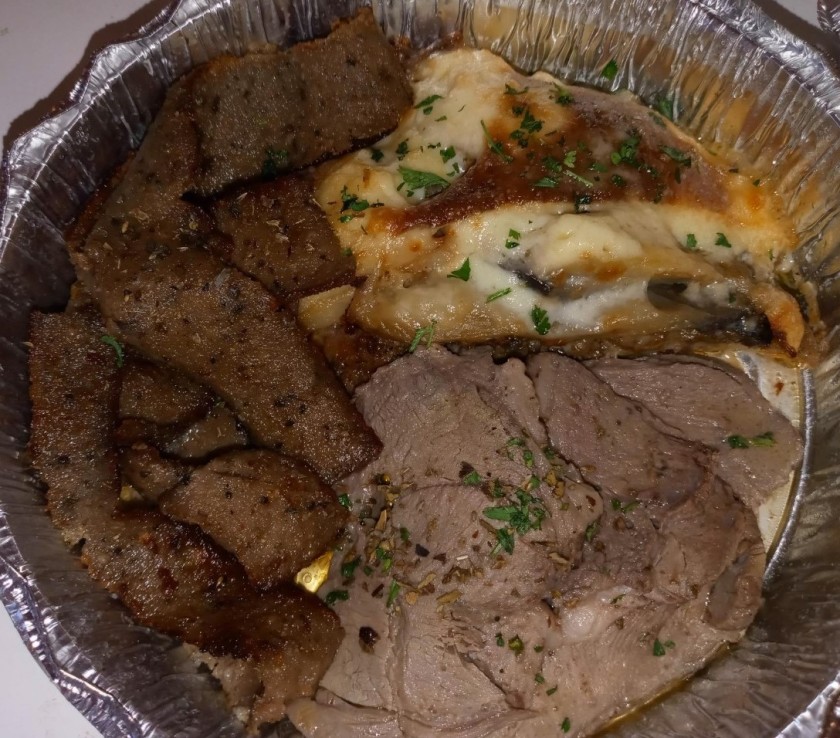 She LOVED the moussaka, so I only took one bite and saved her the rest, because she’s more into it than I am.  For those who don’t know, moussaka is a baked casserole of sliced eggplant, sliced potatoes, and meat sauce (not a tomato-based meat sauce, like bolognese), topped with bechamel sauce and melted mozzarella cheese.  I’m not even the biggest eggplant guy, and I liked it a lot.  The gyro meat must have been grilled on a flattop after being sliced, because it had a nice char to it.  We are both huge lamb fans, and we both thought the roasted lamb was a little bland compared to the other two choices — but I still ate it.  If I order the Corfu Platter again, I would get pastitsio instead of the roasted lamb.

But being a huge lamb fan, I was even more tempted by the lamb shank Kapama for myself, knowing my wife wouldn’t even be interested in tasting it.  Stalwart Saboscrivnerinos know how much I mark out for braised and stewed meats, especially on the bone — cooked at low temperatures for a long time in some flavorful liquid until they’re tender enough to cut with a fork.  I’ve raved about similar braised lamb shanks from Cappadocia Turkish Cuisine, but this was a uniquely Greek take on the lamb shank, with green and kalamata olives and capers in the rich tomato sauce.

I’m not even a fan of olives or capers (two of the few foods I tend to avoid), but I inhaled every morsel of this dish.  The lamb was done so perfectly, the bone pulled out completely clean.  Even though it is always my impulse to try new things when I return to a restaurant, this dish will tempt me again and again.

The Corfu Platter and lamb shank Kapama are both entrees, so each one came with a side — as if this wasn’t enough food already!  I chose lemon roasted potatoes with one of them, which were a little bland.  Funny enough, lemony desserts are among my favorite desserts ever, but I’m just not the hugest fan of lemon as an ingredient in savory dishes.  That’s just me being weird. 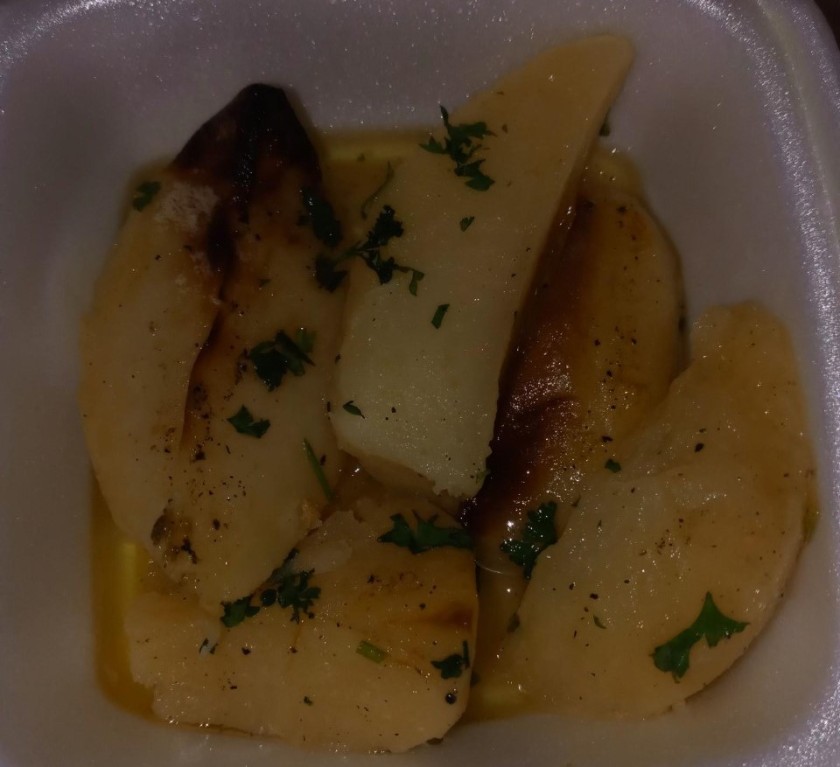 But I love green beans, and this large side order of tender green beans stewed in a tomato sauce was my preferred side.  The other options were French fries, which I worried might not be hot by the time I made it home, and rice, which I will try next time.  I really liked these green beans, though.

The two entrees both came with lightly grilled pita bread wedges, my favorite kind of pita and my favorite way to serve it.  It picks up flavors from the grill and has a slightly crispy exterior while still being soft.  Believe me, I used these to scoop up every drop of that delicious tomato sauce from the lamb shank. 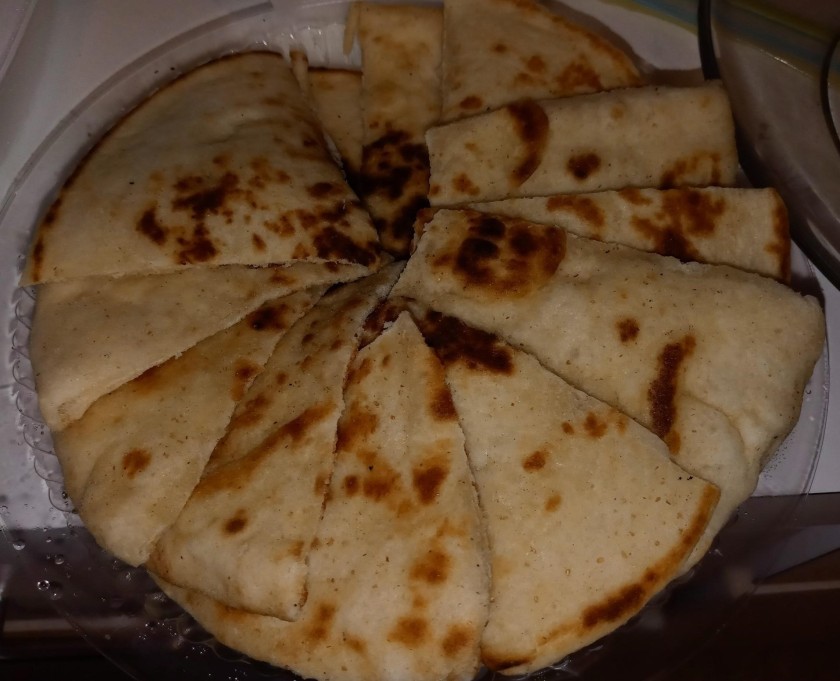 I didn’t taste the baklava ($5.50), but my wife requested it and seemed very happy with it.

Even though I rarely order dessert for myself, I realized I had never tried baklava cheesecake at a Greek or Mediterranean restaurant before, and decided to do something about that.  Corfu’s baklava cheesecake ($6.95) was rich, creamy, sticky, and delicious.  No regrets.  I’m glad I treated myself to it!

There aren’t a lot of nice, sit-down Greek restaurants on my end of town, especially after some old favorites like Greek Flame Taverna, Patsio’s Diner, and Cypriana (all near us) closed so many years ago.  So I was thrilled to recently learn Corfu existed, and even more thrilled to sample so many dishes and enjoy them at home with my wife.  This is a place I would definitely return to, even for the simple thrill of sitting in those blue and white booths when it feels a little safer to dine out — which is hopefully months away, rather than years.  Regardless, I will still come back to Corfu to order more takeout in the meantime!