EDIT: Since I originally wrote this review, Git-N-Messy BBQ reopened inside a Citgo station at 4980 Hall Rd, Orlando, FL 32817, right at the corner of Aloma Avenue and Howell Branch Road.  I’ve been to this new location multiple times in March and April of 2020, and it is better than ever.

I figure most Saboscrivner readers are aware that barbecue is more than just slathering meat with sweet, sticky sauce.  It’s the whole process of smoking meat for hours at a time over the right wood, low and slow.  When people talk about having a backyard barbecue and grillin’ hamburgers and hot dogs, I cringe, because that’s a cookout.  That’s grillin’.  And that’s super-cool and good, but that ain’t barbecuing.

There are regional barbecue styles in different parts of the country: Texas, Kansas City, Memphis, North Carolina.  And different areas focus on different meats: beef brisket, ribs, pulled pork, and more.  Florida doesn’t have its own famous barbecue style, which isn’t the worst thing in the world, because it allows us to draw from the best of everywhere else.  That’s a major positive aspect of Central Florida: it’s a real melting pot — an interesting place to live, and a great place to eat.

That said, while we have some perfectly fine barbecue chains around Orlando (some of which used to be better than they are now), I’ve tried a few of them in recent months and haven’t been enthusiastic about writing reviews.  I have been searching for a while for some next-level barbecue worth shouting about from the virtual rooftops, restaurants that combine meat, sauce, smoke, time, and even ambience to create something truly special.  And I found one the other day in an unassuming Shell gas station in suburban Sanford.

Git-N-Messy BBQ (https://www.facebook.com/gitnmessybbq2/) opened recently in the Express convenience store at the Shell station on West Lake Mary Boulevard, just west of 17-92.  Chef Chuck Cobb previously ran an omakase-style sushi restaurant, Zoetic Sushi, that I never got to try, but people on the Orlando Foodie Forum were singing its praises.  But after Zoetic closed, Chef Chuck’s next move was to return to one of his prior loves: barbecue.  I knew of him from the Foodie Forum, but in person, he is a jovial, jocular personality, happy to chat as he prepared my order.

Inside this convenience store, Chef Chuck has his open food prep area, with three high-top tables and a small bar set up with a few stools.  There are four different local beers on tap: two from Sanford Brewing Company and two from Central 28 Beer Company.  Yes, you can even get a pint of beer with your barbecue, if you dine in the convenience store!  Party boy that I am, I just got a hard-to-find strawberry-kiwi Gatorade to go.  I had planned to bring home my food to share everything with my wife, but a guy was hanging out at a table, just chillin’, enjoying the best pulled pork sandwich of his life (his words), after he had just stopped by to fill up his car with gas.  I knew I had to try that sandwich, but as usual, I wanted to try everything.

The Carolina pulled pork sandwich ($8) comes with slow-smoked pork that Chef Chuck further chopped into smaller pieces, house-made cole slaw, lots of sliced pickles (which I’m really okay with these days), and a Carolina-style mustard-based barbecue sauce I asked him to leave on the side.  The sandwich was huge, and a huge value for that price.  Here it is, back at home on a too-familiar plate: 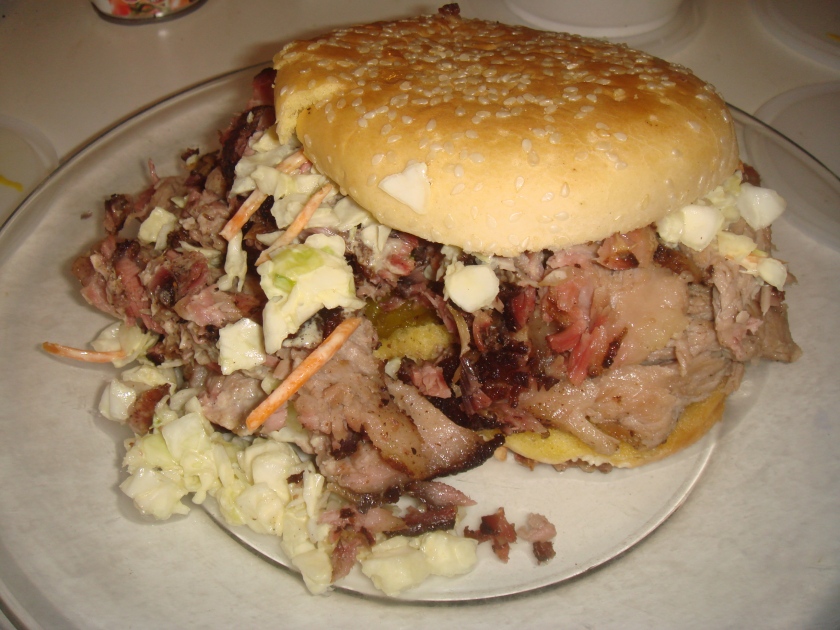 I also got an order of smoked beef brisket ($16), which consisted of four large and generous slices.  There was no need to chop them up further or drench them in sauce to obscure the rich-looking marbling or the dark, spicy outer bark.  At some restaurants, the brisket is too dry and tough, and at others, it seems like you just get served a pile of greasy fat.  Here, it was a perfect blend of tender meat and unctious fat, just perfect.

And then I also got an order of smoked sausage ($8.50), a barbecue item that tends to be underrated, but I always like sausage in any forms.  The large link was chopped up into smaller segments, and once we got it home, we especially liked the rich snappiness of the outer casing — something missing in far too many sausages and hot dogs.  Even my wife liked the sausage, something she can usually take or leave.  It was a generous order, and probably my favorite smoked sausage that I’ve had, at least in a really long time. 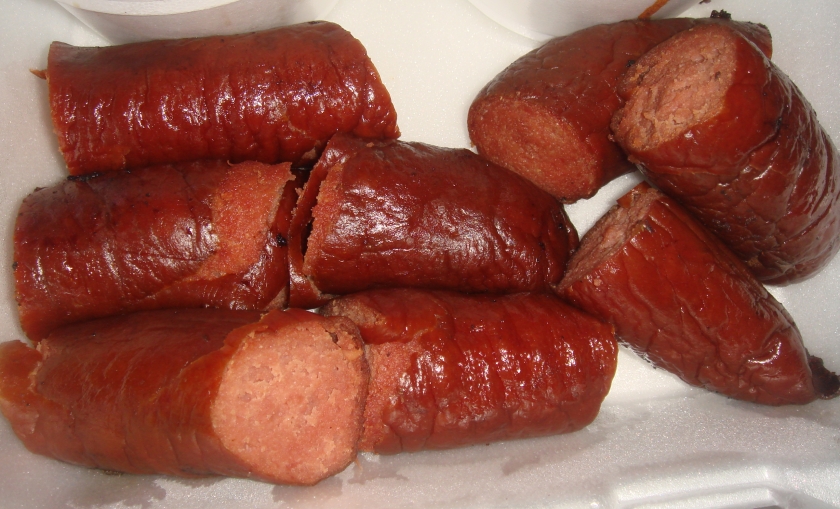 The sides I brought home included more of that cole slaw (which I might have gone without, since the giant pork sandwich had so much on it), very good baked beans, and excellent collard greens, of course cooked with meat.  I love collards, and I’ve tried to make them at home many times, but mine NEVER come out as good as these barbecue joints, even after spiking them with pepper vinegar.

Chef Chuck loaded me up with five house-made sauces: sweet, mild, hot, mustard-based, and an Alabama white sauce that goes so perfectly with chicken — which is great, because I have a really bland chicken breast in the fridge that desperately needs something to salvage it.  That will teach me to stick to buying chicken thighs, the superior cut of chicken!  Anyway, they were all good sauces. 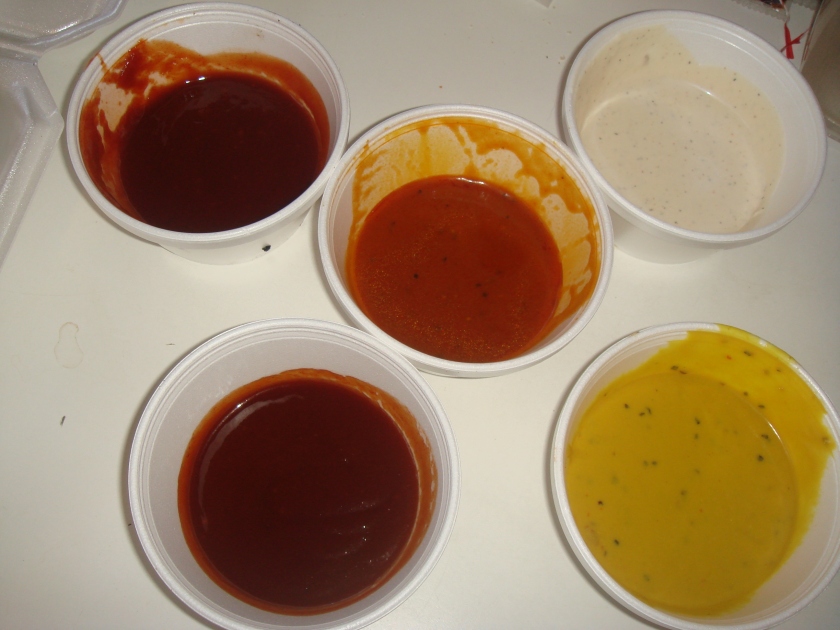 I would have loved to try the St. Louis-style spare ribs, but those would not have been ready for another hour, and I couldn’t hang around that long.  But I’ll totally go back for them, because everything else was so amazing.  I learned that Chef Chuck can also make a Tampa-style Cuban sandwich with his own slow-smoked pulled pork in a house-made mojo marinade, Genoa salami, ham, Swiss cheese, pickles, and mustard, so that’s also intriguing.  Too often, the pork is the weak link in many Cuban sandwiches, either dry or not very flavorful.  I know it would be the star in his version of the Cubano.

I really liked everything I tried from Git-N-Messy BBQ, and immediately liked Chef Chuck Cobb, who is working meat miracles in this most unlikely of settings.  My readers know by now that too much extravagance and expense make me uncomfortable, and I’m much happier when I’m discovering humble hidden gems, casual restaurants that would be hard to find without a push in the right direction.  It doesn’t get much more humble or hidden than some of Central Florida’s best barbecue in a Sanford gas station, so consider this your push and the Saboscrivner your friendly neighborhood pusher.  Where else can you fill up your car and your belly at the same time?  (Costco, I guess, but Git-N-Messy is really something special!)  Just as a final note, Git-N-Messy is closed Sundays and Mondays, as even Chef Chuck needs some time off from smoking and slicing. 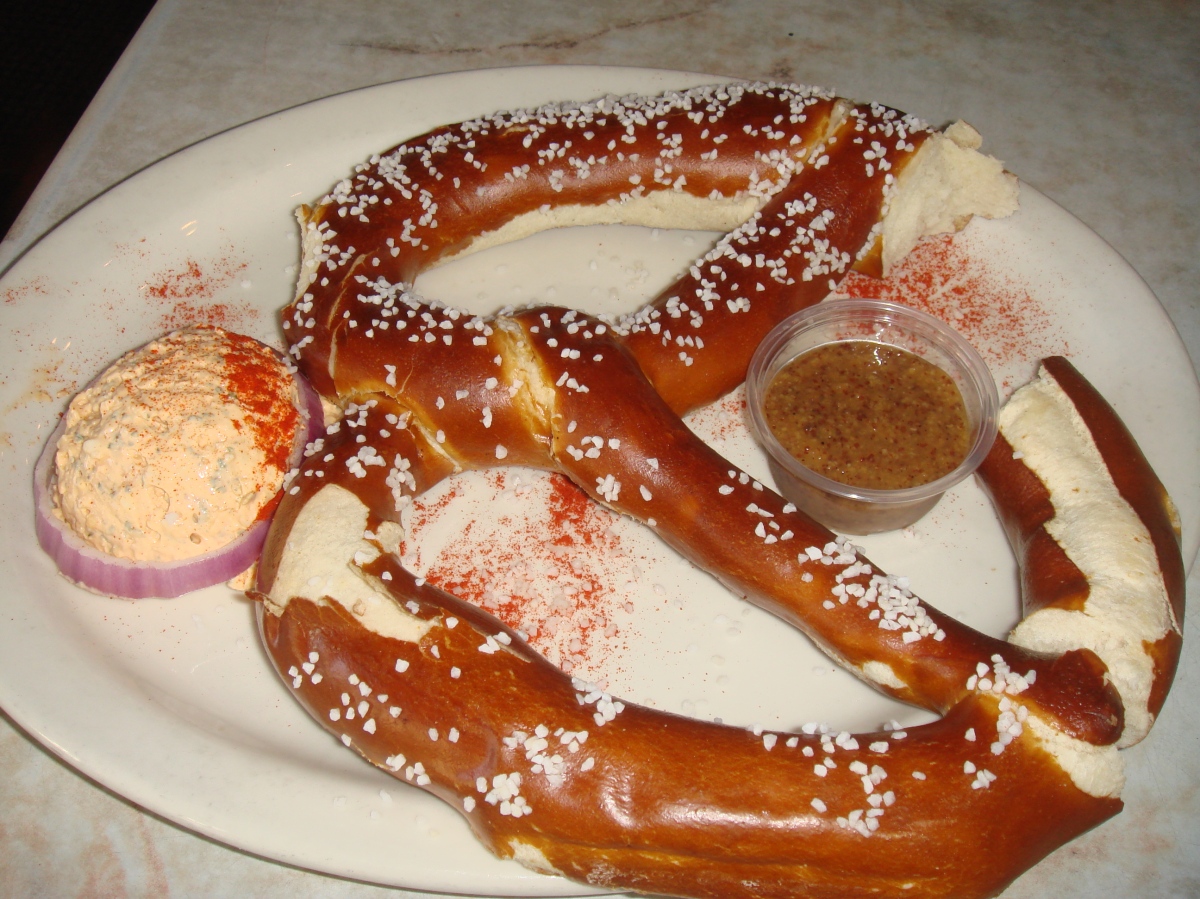 For Orlando residents in the know, even though we have hot and hip foodie neighborhoods like Mills 50, the Milk District, and Winter Park, one of our most up-and-coming areas is Sanford, about half an hour north of downtown Orlando, in Seminole County.  Sanford boasts a quaint, picturesque, historic downtown area of its own, with plenty of exciting restaurants, bars, and breweries along its cobblestone streets to tempt and tantalize anyone who appreciates good meals and tasty beverages.

Maybe downtown Sanford’s most beloved culinary destination is the German restaurant Hollerbach’s Willow Tree Cafe (https://www.hollerbachs.com/).  Theo Hollerbach has expanded his empire into a very good German market and deli (Magnolia Square Market), and even a clothing store for all your lederhosen and dirndl needs.  But the restaurant is the main draw, a place to drink giant beers (if that’s your thing) and eat heaping plates of hearty, delicious food in a fun, festive, casual atmosphere.

Ze Germans have so many polysyllabic words that fit very specific situations and feelings, and the one they all take to heart at Hollerbach’s is gemütlichkeit, “a sense of well being one feels when enjoying the company of friends and family while savoring good food and drink.”  You might not be able to pronounce it, especially after one of those aforementioned giant beers, but you will definitely feel it.

It doesn’t get much more fun or festive than this huge, soft, fresh Bavarian pretzel, which is served with with delicious sweet mustard (remember, the Saboscrivner is a mustard aficionado!) and savory, spicy beer-cheese spread called obadza.  The two of us didn’t finish the whole thing, although we easily could have.  Luckily, my wife isn’t into condiments, dips, sauces, or spreads, so more mustard and obadza for me! 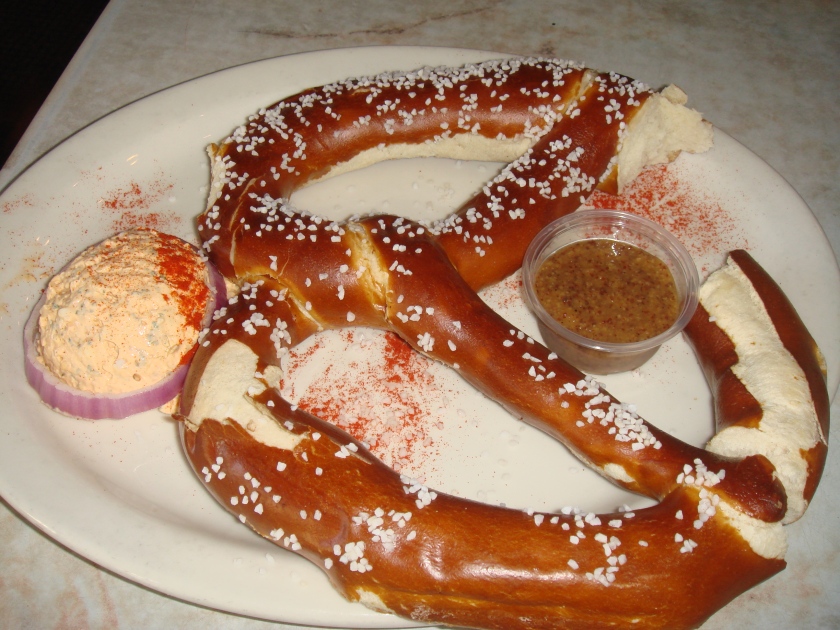 At Hollerbach’s, I will usually order some combination of wurst (sausages), which are often just a mustard delivery system for me.  But for our most recent lunch, I tried something new, and I’m so glad I did.  This is eisbein, a skinless, bone-in pork shank, roasted to rich, tender perfection.  The bone slid right out with no meat attached to it, and I could practically cut it with my fork!  It made me so happy.

All the sides at Hollerbach’s are terrific, but I got mine with excellent sauerkraut (served warm with bacon, onions, and apples, and sweeter than what you’re used to on hot dogs) and potato salad (also served warm, with applewood smoked bacon, onions, pickles and vinegar, and sweeter and tangier than most potato salad you’ve had before).  Obviously the sides were very complementary, and both worked well with the rich pork.  This German mustard was quite spicy and helped open up my sinuses!

My wife always orders her favorite dish at Hollerbach’s: pork schnitzel, pounded flat and tender, coated in a cracker crumb breading, and pan-fried.  She loves it with spätzle, which are buttery, cheesy, chewy homemade dumplings.  For the uninitiated, they are kind of like tiny, uneven-textured, golden, buttery, pan-fried gnocchi.

They have a huge covered patio, and on cool, sunny days, we love to sit outside to eat, people-watch, and especially dog-watch.  They almost always feature live music — usually a singing guitarist on the patio when we go for lunch on weekends, and a traditional German musical duo, Jimmy and Eckhard, that performs in the evenings, when people hoist their enormous beer steins and the place becomes a lot more raucous.

Hollerbach’s has beautiful cakes and other desserts that always tempt us, but this time, we walked directly across the street for my favorite ice cream in the Orlando area at Wondermade.  I will have to review them some other time, but trust me — they have damn fine ice cream.  But I really need to make it back, because my wife was too full and tired to head back around the corner to Hollerbach’s Magnolia Square Market, one of the best places around to buy sausages, salami, and other cured meats, as well as baked goods and other German groceries.  An ethnic market with cured meats?  That’s Saboscrivner heaven, friends.