I watch a lot of TV, but I like to think I only watch good shows — well-made, well-written, well-acted.  And if I watch a sitcom, it’s going to be legitimately funny, not one of those cringeworthy canned-laughter multicams.  One of my newest TV discoveries is South Side on Comedy Central, a sitcom set in the South Side of Chicago, created by the insanely talented and hilarious Bashir Salahuddin and Diallo Riddle.  This showrunner duo also has an even funnier show on IFC called Sherman’s Showcase, which will certainly end up in my Top Ten Shows of 2019.  I highly recommend jumping into both shows while you can, since their first seasons are still airing, and you can catch up on the Comedy Central and IFC websites I linked to above, or maybe on demand.

Anyway, in last night’s episode of South Side, the lead character Simon made the controversial claim of not liking Chicago’s famous deep dish pizza because “It’s just a lasagna with crust.”  I too have joked before that “It’s not pizza; it’s a casserole!”  I’ve found deep dish pizza to be far too greasy, dense, and heavy — both by weight and how it sits in my gut afterwards.  But my wife loves the stuff, the same way I swear by Sicilian pizza, like the kind they serve at one of my local favorites, Pizzeria Del Dio.

But fate intervened yesterday, in the form of one of my Orlando Foodie Forum friends posting that Rosati’s (https://myrosatis.com/), a Chicago pizzeria known for its deep dish, was opening at the intersection of University and Goldenrod where the Lucky’s Market is, not far from where I work.  Still chuckling over the “lasagna with crust” comment, I mentioned it to my wife during the South Side commercial break, and since she loves it so much, we decided to go today.  It was the second day this Rosati’s location was open for business, but they were ready for us, and they made an excellent first impression.  It was even more of a treat after eating everything in our fridge and freezer for most of the last week, expecting a hurricane that never made it here.

Rosati’s opened in a very small space.  It is set up mostly like a takeout pizzeria where you order at the counter, but they do have two tables that can each seat four, as well as a counter with some high-top stools.  We had every intention of eating there, so we could try the pizza hot and fresh.  As you can see, they also offer appetizers, wings, salads, pasta dishes, sandwiches, and desserts.  It’s probably much easier to read the menu on the website above, but this way you can see some prices. 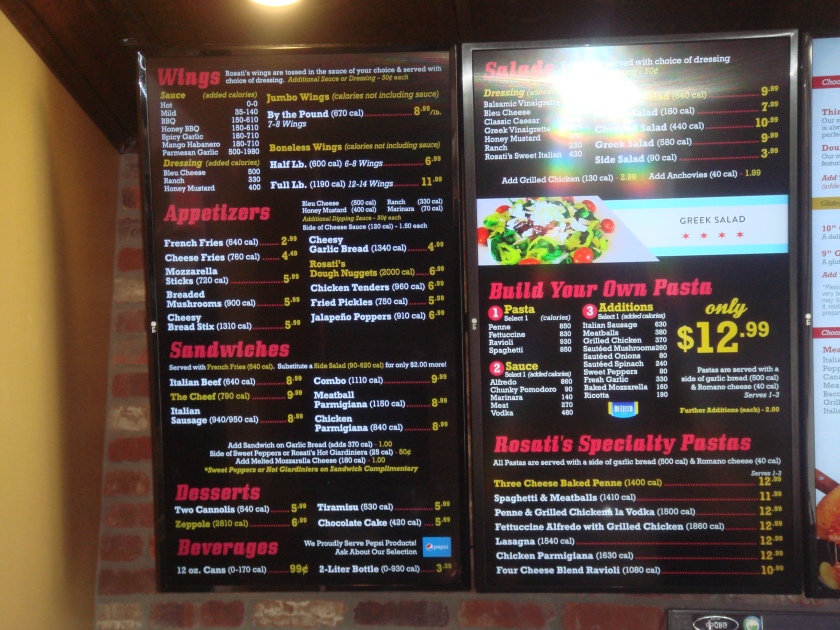 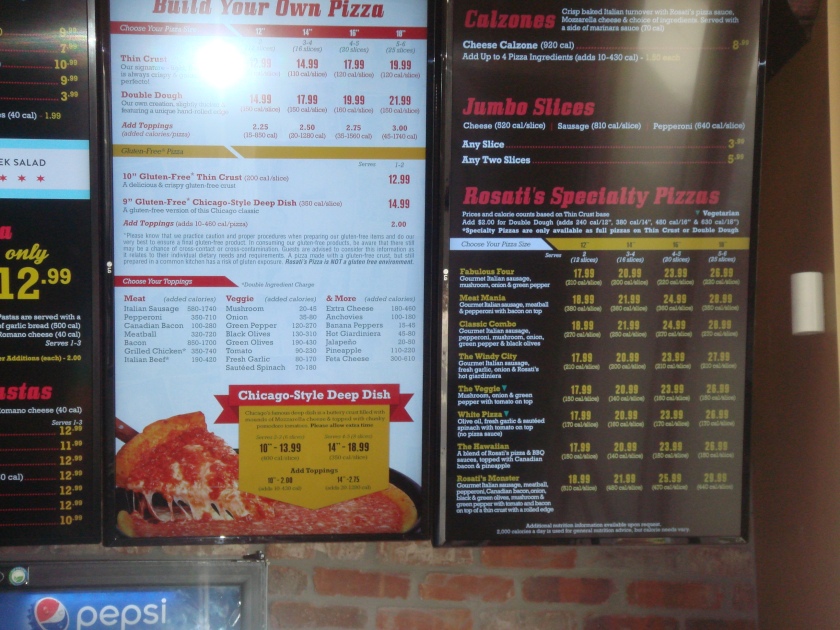 We ordered the 10″ deep dish with sausage, the smallest one they make, which can feed two to three people.  Even though we were hungry, we know this is rich and heavy pizza, and a little goes a long way.  It came out in about 15 minutes, and it was great!  It didn’t have the greasy, buttery crust that Giordano’s and Lou Malnati’s pizzas are known for.  (We had Lou’s on a Chicago trip about five years ago, and Giordano’s near the Orange County Convention Center in “tourist town.”)  This crust was light and fluffy, with a nice crispy outer layer that wasn’t burnt or dry.  It reminded me more of the brilliant and easy cast-iron skillet pizza recipe I have perfected over the last year, created by Bon Appetit’s delightful and creative test chef Claire Saffitz.  The tomato sauce was much chunkier than typical pizza sauce, in typical Chicago deep dish fashion, the cheese was melty and had a nice pull to it, and the sausage was flavorful and not overly greasy either.

Rosati’s only had paper plates available because they were still getting situated, but that was totally fine with us.  Here’s a single slice from the pizza that looks small, but it’s a lot of food.  I ate two slices and my wife just had one, so we have plenty of leftovers to warm in our toaster oven tomorrow. 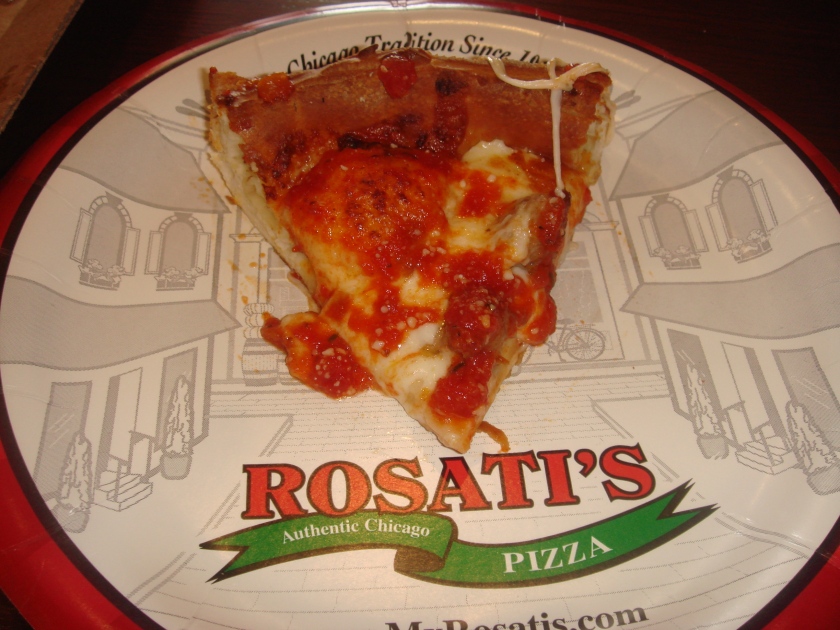 But surprise of surprises, Rosati’s sells three kinds of pizza: deep dish (apparently a bigger hit among Chicago’s tourists), a thin-crust pizza that many locals prefer, and a hand-rolled “double-dough” pizza.  You can order single slices of the double-dough (though not the thin-crust), so I had to try it as well.  It’s a large slice, not unlike a typical New York-style slice, but thicker and softer, without the thin crispiness of New York pizza.  I asked for pepperoni on this single slice, and as you can see, they were extremely generous with the pepperoni. 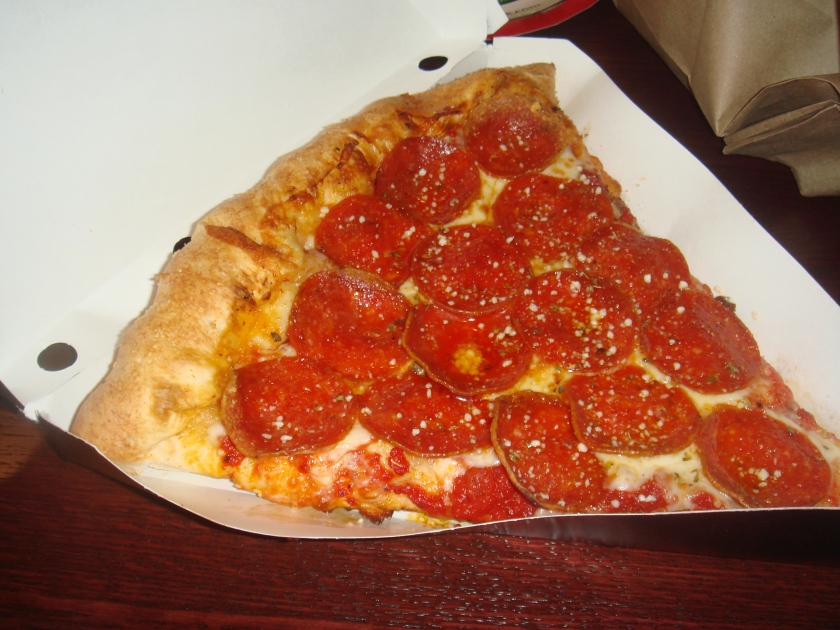 I also appreciated that each slice of pepperoni didn’t curl into a crunchy little grease-cup, which is why I’m sometimes hesitant to order pepperoni on pizza.  Blasphemy, you say?  I prefer my pepperoni cold on a sandwich, but this was a good example of a slice of pepperoni pizza.  And just so you all know, I cut this slice down the middle and have only eaten half so far.

Since there is often talk about Chicago’s beloved Italian beef sandwiches on the Orlando Foodie Forum, I saw Rosati’s offered them and had to order one for later.  This was obviously a lot of food, and you haven’t even seen it all yet!  The Italian beef sandwich came with fries, and we did eat most of them at the restaurant, since cold fries are a shande (a shame) and an abomination.  They were crinkle-cut fries, very well-salted, and served with packets of Red Gold ketchup, a brand you hardly ever see around here.  (Maybe it’s also a Chicago thing.)  My wife loves crinkle-cut fries, so that was a nice little bonus.

We chatted with one of the gentlemen in charge of opening up this Rosati’s location.  He told us he is based in Chicago but travels around the country for the company, opening up new restaurants and training the staff.  We talked a little about different regional pizzas and the food scenes in Chicago and Orlando, and we wished him well as he got this location up and running.

And he couldn’t have been a nicer guy, because while we were still elbow-deep in pizza and fries, he came out with this box of zeppole for us, little nuggets of pizza dough, crispy on the outside and fluffy-soft on the inside, dusted with powdered sugar and served with a big dipping cup of gooey Nutella.  This was completely complimentary, just for us being so enthusiastic on their second day.  We were very touched by the unexpected gift, and my wife was over the moon because she loves desserts like this.  They’re kind of like beignets.  This was a giant portion, and we haven’t even made a dent in half of it.

So we came home with lots of leftovers:

And I unwrapped the Italian beef sandwich and heated it up for dinner.  For those who are unfamiliar, an Italian beef is a famous Chicago street food, served at establishments like Portillo’s (which has expanded into Florida but not Orlando yet) and Buona Beef.  The sandwich is stuffed with thin slices of seasoned roast beef, served on an Italian roll, often with au jus and topped with sweet peppers, hot pickled giardinera vegetables, or a combination of the two.  If you think I asked for the combination, you’d be right.  I also paid a $1 upcharge to get my Italian beef on garlic bread, because I am grateful to be gainfully employed and don’t have to worry about such things anymore. 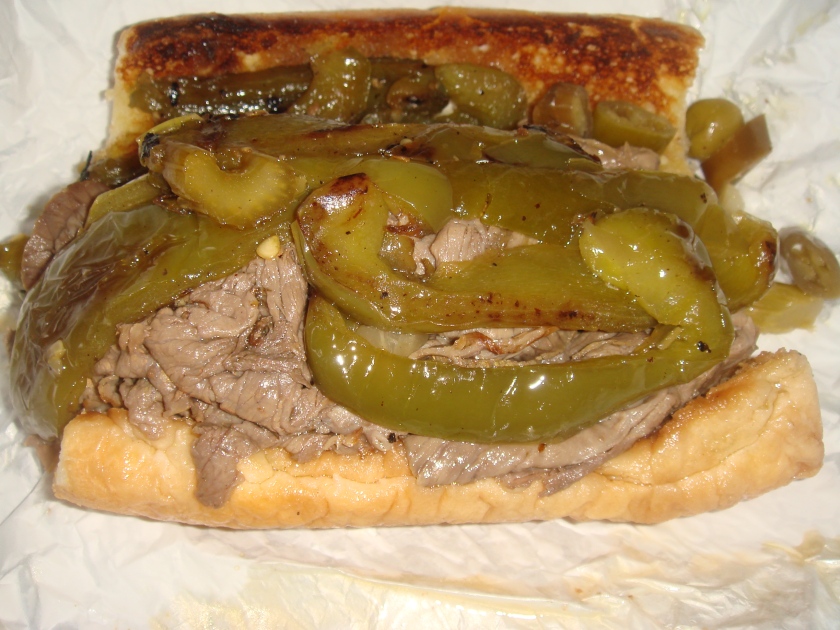 Here it is with the au jus, which I opted to get on the side in a cup, rather than have it poured over the sandwich (“dipped,” another option, but it would have made a real mess since I ate it several hours later). 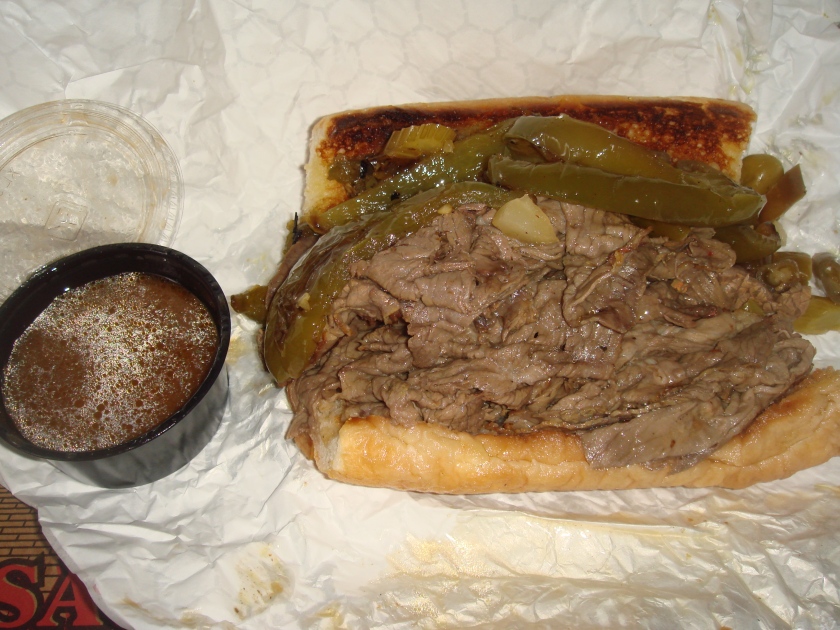 It was very tasty and good quality, but extremely salty.  Between our pizza lunch and this sandwich for dinner, I have drunk several glasses of water and a big bottle of Gatorade today.  I love a good roast beef sandwich, but I think I prefer mine cold, with rare roast beef, some kind of cheese, some kind of onions (grilled, sauteed, or caramelized), horseradish, mustard, and a creamy sauce to tie it all together.  That’s not to say there was anything wrong with this Italian beef.  I haven’t had one in many years, and Rosati’s nailed this quintessential Chicago classic, as synonymous with the Windy City as the Blues Brothers and da Bearss (and hopefully one day, South Side).  But like the deep dish pizza, you have to be in the mood for it.  You have to be ready.  You might want to set aside some time for a nap, and to have some Gatorade on hand to rehydrate due to all the salt.

So that’s Rosati’s.  We liked it, we’ll definitely go back, and I hope they stick around and are successful.  We don’t have many options in Orlando for deep dish pizza or Italian beef sandwiches, so if you’re from Chicago and missing your old favorites, or you just love the new and novel like we do, pay them a visit and give them a warm welcome to Winter Park!

One thought on “Rosati’s Pizza”