Happy holidays, folks!  Sorry it has been a while since my last review, but I have written a few new ones I’m getting ready to stuff down your chimneys.

I rarely eat Thai food — I have to get that out of the way right away.  Always a late bloomer, I only ever ate it ONCE before I left my parents’ home to go off to college.  We had a jazz musician friend who was playing a gig at a Thai restaurant in Miami, and he invited us out.  My parents really don’t like trying new foods or going to new places, but they were cool enough to step out of their comfort zones that evening.  But none of us were prepared in the pre-Internet era of the mid-’90s to know what we might like, so we all very likely ordered the wrong things.  I know my dad didn’t like his at all.  It was a whole new world of spices and flavors, and he was not having it.  He said his food made his bald spot tingle, and it made him ANGRY, like he was about to Hulk out.  So that was it for Thai food for a few more years.

At least now, I’ve been to enough Thai restaurants over the years to generally know what I like and what I don’t.  My favorite dish is pad kee mao, AKA drunken noodles: wide, flat, chewy rice noodles stir-fried with a protein, onions, bell peppers, basil, sometimes carrots, and some spices.  It gets its name not because the recipe includes any alcohol, but because it’s great late-night drunk food.  I believe it, but as a non-drinker, trust me when I say it’s perfectly fine no matter what state you’re in or when you enjoy it.  It can be spicy, but I tend to go with medium heat.  That’s my go-to dish whenever I try a new Thai restaurant, because even when it’s mediocre, it’s still pretty good.  Don’t get me wrong, I also like pad Thai and some other dishes, but drunken noodles are where it’s at.

Well, I’ve been hearing great things about Mee Thai (https://mee-thairestaurant.business.site/) for a while, on Lee Road in Orlando, not far off I-4 exit 88.  Mee Thai is ten minutes from Winter Park Village, and two minutes from another favorite of mine, LaSpada’s Cheesesteaks and Hoagies.  It’s a small building with a green roof that makes it hard to miss in a relatively industrial stretch of road with a surprising amount of intriguing restaurants around.  And Mee Thai, specializing in food from the Esan region of Thailand, was definitely intriguing.

When I arrived, the two ladies working were extremely friendly and welcoming, especially when I said I’ve been reading good reviews online and this was my first visit.  I was ordering takeout to bring home for my wife, but they were so nice, I already couldn’t wait to come back with her to dine in.  I ordered drunken noodles with chicken for myself, pad Thai with beef for my wife, a Thai iced coffee for her, and an order of Thai doughnuts to share for dessert.  They didn’t have mi krop, my wife’s favorite Thai appetizer, but it was still a large menu with lots of selections.  The menu had prices for lunch and dinner entree portions, I didn’t specify, and they didn’t ask, but it was lunchtime, so I assumed they gave me the lunch portions.

While I waited in the restaurant, the young lady was kind enough to bring me a small salad to enjoy.  It was a simple salad with crispy iceberg lettuce and shredded carrots, but the dressing brought it to a whole other level.  It was some kind of vinaigrette, a little sweet, kind of a creamy white color, and I feel like a boob because I’m not enough of a Thai food expert to describe it any better, but it was delicious.  I would have bought a whole bottle of that salad dressing if they sold it.  Anyway, here is the salad they packed for me to bring home for my wife.  (She didn’t eat it today, so hopefully I’ll get to have it tomorrow!)

When I got the food home, we were both extremely impressed by the quality, freshness, and flavors of everything, plus the generous portion sizes (pretty huge if they were the lunch portions).  The drunken noodles had that chewy consistency I love, and while I think I would have been happier with beef or pork, the white meat chicken was so flavorful, if a little dry.  The medium heat had a pleasant kick, and next time I might be brave enough to try the hot, but maybe not “Thai hot.”  I love what Thai basil brings to this dish, plus the onions and bell peppers, which were stir-fried to a very nice softness.  It was such a large portion that I didn’t finish it all in one sitting, which is a good thing that I don’t do often enough.

My wife was a little surprised at first that her pad Thai didn’t have the orange hue she is used to, but if anything, that probably makes this version of the dish a little healthier and a little more authentic.  It had everything — tender, juicy beef, chewy noodles, a little citrusy tang and sweetness in the aftertaste.  I had to try it as well, and we both agreed it was one of the better versions of pad Thai we’ve had around here.  Probably the best.  Same goes for my drunken noodles.  Very impressed. 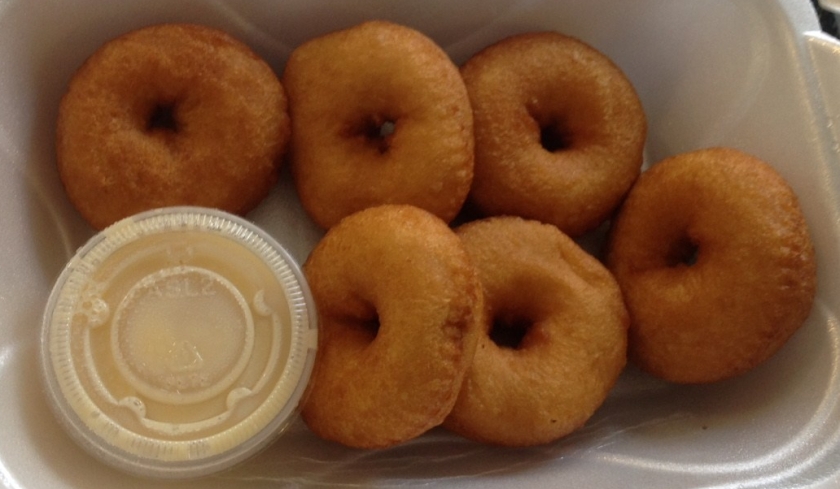 So that’s Mee Thai, a wonderful restaurant that has been open for about a year, that I highly recommend.  I’ll give it my seal of approval over every other Thai restaurant we’ve been to in Orlando, which is at least six or seven of them, and I think these prices were cheaper than most of the others I’ve been to.  They are open seven days a week, from 11 AM to 9:30 PM, they are incredibly nice, and the food is great.  I intend to become more well-versed in Thai food in 2019, and I can promise I’ll go back to Mee Thai regularly to try new things and revisit my go-to favorite, drunken noodles.

One thought on “Mee Thai”