If there’s one thing I hate, it’s going to the mall.  The only kinds of shopping I like are grocery shopping and comic book shopping.  However, once or twice a year I end up near Orlando’s upscale Mall at Millenia, rarely for anything I need.  At least there’s a very welcoming and well-stocked Coliseum of Comics location near that mall, along with one of my favorite Thai  restaurants anywhere, ever: Naradeva Thai (http://naradevathai.com/).

In the middle of a sprawling retail district, in the shadow of a Super Target, Naradeva feels like an oasis.  It’s definitely one of the best restaurants in that part of Orlando, but because it’s tucked into a little strip of shops (a musical instrument store, a GameStop, a Subway, and the aforementioned Coliseum of Comics), it is easy to miss.  But once you get inside, you will see what I mean about the sense of calm, relaxation, and beauty that will wash over you.  It’s one of the prettiest dining spaces anywhere in the city, on top of serving top-notch Thai food.  It is a sanctuary. 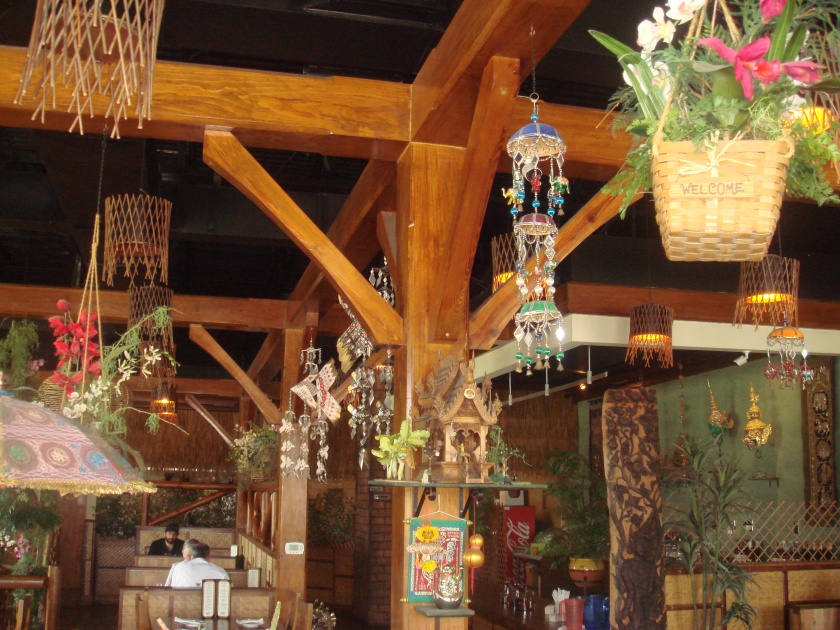 Going there recently with my wife, we both bemoaned the fact that Naradeva is across town from us, or otherwise we would be regulars for sure.  Even in the blistering August heat and sweltering humidity, it feels cooler inside, with the calming sounds of a little waterfall soothing us after weaving through the unknowable weekend traffic on I-4.

We both started our lunch with sweet, rich, creamy Thai iced coffees (one of the few kinds of coffee I like):

After stirring it up (little darlin’):

Back when I reviewed the wonderful Mee Thai last fall, I mentioned that I don’t eat enough Thai food and would like to try more dishes and even experiment with upping the heat levels.  Sadly, I haven’t done that enough.  On a rare trip to Naradeva, I defaulted to my favorite Thai dish: pad kee mao, also known as drunken noodles.  I feel like I need to try every Thai restaurant’s version of this, since everyone makes it a little different, and even a mediocre version is still going to be good.  Naradeva’s pad kee mao was above and beyond.  It was exactly what I wanted and needed, with nice chewy rice noodles, ground pork, crispy bell peppers and green beans, scallions, Thai basil, and bamboo shoot strips all stir-fried together.  I used to be skeptical about bamboo shoots, but they’re great — chewy and inoffensive.  One reason I love pad kee mao is the slight sweetness that cuts through the spice, probably from the basil leaves. 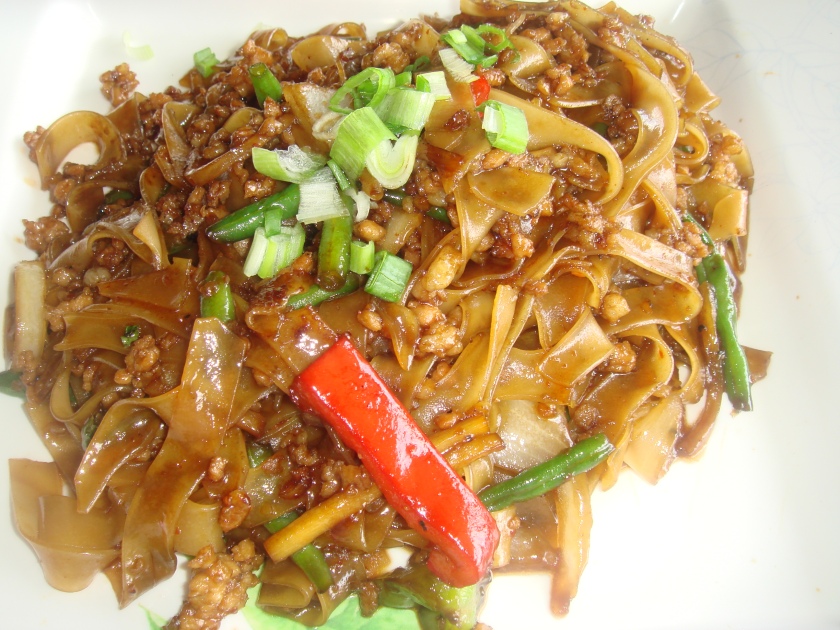 I wish the noodles they used were thicker and wider, but those super-thick and wide noodles are pretty hard to find around here.  I tried the “hot” version for the first time, up from my usual medium heat.

This is Naradeva’s Thai red barbecue pork fried rice, which we ordered to split because we both love it so much.  It’s definitely my favorite fried rice dish anywhere.  The char siu-style pork is juicy, sweet, and tender.  It pretty much melts in your mouth.  They add eggs and scallions, plus the cilantro garnish on top, keeping it pretty simple but never boring or bland.  It’s amazing, and as long as you eat pork, I would strongly recommend any visitors to Naradeva try this dish.

And my wife, who always has impeccable taste, selected the boneless duck in sweet and sour sauce, which was as gorgeous to look at as it was delectable to eat.  Naradeva serves their duck in a very light batter that comes out crispy from deep-frying, but never too crunchy or heavy with batter, and never dripping with grease.  You can choose from three sauces: tangy sweet and sour, pad kaprow Thai basil sauce (that probably would have been similar to the sauce on my pad kee mao), or red curry sauce.  But I know she doesn’t like curry or anything spicy, so she chose wisely and regretted nothing.  The sweet and sour sauce includes onions (which I dutifully picked out for her, like a good husband), tomatoes, bell peppers, cucumber and pineapple chunks.

I can’t get over this plating!

The duck comes with white jasmine rice, which neither of us paid much attention to, not with that perfect fried rice there between us.  But I took it home and made it into my own (not nearly as good) fried rice a day or two later.

On past visits to Naradeva, we have treated ourselves to puffy fried Thai doughnuts served with coconut custard dip, but we had more errands to run and were pretty full after this particular meal.  We will definitely return, though.  I’m sure our blood pressure and stress levels drop every time we visit that gorgeous restaurant, as we transport ourselves to a serene jungle oasis.  It’s even worth braving the bougie mall if I can stop at Naradeva on the way in or out.  And after that luxurious lunch, I found a comic I had been looking for forever at the shop a few doors down, and I even had a coupon for a $5 discount.  As my man Cube once said, “I gotta say it was a good day.”

One thought on “Naradeva Thai”