Well, before it got hot in Orlando again, it was remarkably chilly for a little while there.  I look forward to those brief blasts of winter all year, every year.  I’ve lived in Florida my whole life, which I guess makes me a true Florida Man.  I hate our humid, oppressive, sticky summers and eagerly anticipate the few weeks a year where we can walk outside, eat outside, and see the one coat or jacket everyone owns.  We don’t have to shovel snow or drive on icy roads, so our cold is a novelty, and we know it won’t last.

Winter is also perfect soup weather, and there are few soups finer than phở, the Vietnamese noodle soup that so many Orlando restaurants have perfected.  I have yet to get into the trend of fancy bowls of ramen, after so many years of subsisting on seven-for-$1 bricks of instant ramen noodles.  On the other hand, pho (which I was taught to pronounce “fuh,” although I hear “foe” all the time) is so warm and rich and hearty that it is a welcome meal year-round, not too heavy or hot to enjoy in warmer months.  But nothing beats a steaming bowl in 40-degree winter weather.

Slow-simmered broth is flavored with spices including cinnamon and star anise, and it includes rice vermicelli and different cuts of meat.  Thin slices of rare beef eye round are the most common, but other bowls of pho may also include beef brisket or flank steak, chewy beef meatballs (completely different from the meatballs you’d get with spaghetti or in a sub), tendon, and tripe.  Pho usually contains paper-thin slices of onion and diced green onions as well.  Then lucky diners can continue to customize their pho with sprigs of fresh Thai basil, bean sprouts (I’ve never been a fan, sorry), fresh slices of jalapeno peppers, and fresh lime wedges, which come on a separate plate.  Hoisin sauce, sriracha, and sambal oelek (chili garlic sauce) are common condiments that are always available on Vietnamese restaurant tables.  No two bowls of pho end up alike, which is part of its charm.

Anyway, we are very lucky to have a large Vietnamese population in Orlando, and plenty of delicious Vietnamese restaurants to choose from, mostly centered in the Mills 50 district near downtown.  I’ve tried most of them at least once, but I always return to two favorites: Saigon Noodle and Grill or the subject of this review, Pho 88 (http://www.pho88orlando.com/).  My wife and I had our first date at yet another local Vietnamese restaurant, Lac Viet, but we’ve been going to Pho 88 for many years.  Located on Mills Avenue, just north of busy Colonial Drive in the heart of our foodie-friendly Mills 50 district, Pho 88 also has more parking than a lot of the other nearby restaurants, which is one more reason we end up there as often as we do.  Not only do we like it a lot and seek it out, it often becomes our fallback choice when we can’t park near anywhere else.

The first night, we both ordered pho.  She likes the simple pho tai, with thin-sliced rare beef eye round.  I prefer the pho dặc biệt combination with the rare beef slices plus fatty brisket, well-done flank steak, dense and chewy meatballs, and soft, chewy, rich tendon.  Tendon and book tripe almost always come together, and while I must admit the texture of tripe doesn’t do much for me, I never ask them to hold it.  Here is my bowl, after I tore up several basil leaves and added them in.  These are HUGE bowls, by the way.

Instagram-hip foodies love to get the shot of pulling perfect noodles out of a perfect bowl of pho.  Most of you are already acquainted with the limitations of my phone camera, so apologies in advance for this action shot:

On our second visit the next evening, my wife ordered her favorite pho tai again, but I decided to switch it up and get something spicy for the chilly night: a different kind of noodle soup called bún bò huế.  It contains thicker rice noodles than the vermicelli in pho, pork roll (similar to bologna, but chewier and cut thicker), well-done flank steak, lemongrass, and white and green onion in a rich, spicy, orangey-red broth.  It cleared up my sinuses and warmed my body from head to toe. 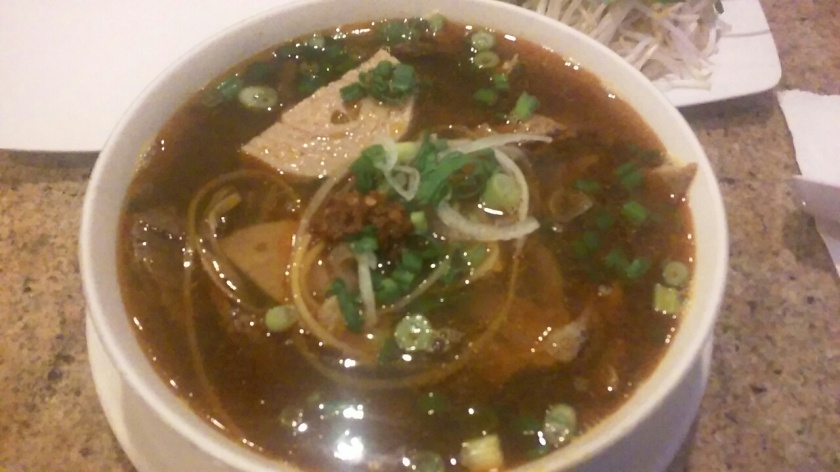 I am also a fan of banh mi sandwiches, which demonstrate the French influence in Vietnamese cuisine.  Served on a crusty baguette, my favorite banh mi includes a variety of pork-based cold cuts and is served with a spread of butter and liver pate on each side of the roll, cool, shredded pickled carrot and daikon radish, refreshing sprigs of fresh cilantro, and spicy slices of fresh (never jarred) jalapeno peppers.  Best of all, these sandwiches are usually quite cheap, often $4 or $5.  Pho 88 is one of the few Orlando Vietnamese restaurants that serves banh mi as well as pho, so I’ll often order a banh mi as an appetizer, devour half there, and save the other half for later.  I did NOT order a banh mi with my soup two nights in a row, just that first night.

Well, we’re over halfway into February and our local weather is already back into the 80s, but like I said, pho hits the spot year-round at Pho 88.