I crave seafood pretty much all the time.  I don’t think it’s a shellfish impulse, but I like to say I’m on a seafood diet — if I see food, I’ll eat it, especially if it’s seafood.

While Orlando isn’t swimming in an abundance of seafood restaurants like our neighboring cities on Florida’s two coasts, we have a few local favorites.  Shortly after we started dating back in 2006, my wife and her parents introduced me to Boston’s Fish House (http://www.bostonsfishhouse.com/Home).  Modeled after the coastal seafood establishments of New England rather than beachy, tropical Florida seafood shacks, Boston’s specializes in fried favorites: shrimp, scallops, fresh fish (usually cod and/or haddock, but also farm-raised catfish), oysters, and clams.  But if you don’t want your denizens of the deep deep-fried, they also offer broiled salmon, pan-seared mahi, and even a chilled Maine-style lobster salad sandwich, which you probably know better as a lobstah roll.

However, my in-laws always opt for the seafood combo platter, which comes with a mountain of fried shrimp, scallops, fish, onion rings, and a choice of oysters, clam strips, or whole belly clams, a rare treat that you rarely see at any Florida seafood restaurants.  Oh, and you get two sides with it too! This platter comes in two sizes, the smaller Mate’s Platter and the larger Captain’s Platter.  You get more than enough food for two hungry people to share if you order the Captain’s Platter, so it’s just a question of everybody being on the same page.  For example, my mother-in-law doesn’t like scallops so she asks them to substitute extra fish.  My wife and I agree that the fish is the blandest part, so I’ll usually ask if we could get clams AND oysters but no fish.  They are always really cool and patient regarding these substitutes.

Be warned in advance: Boston’s gets REALLY crowded in the evening, especially on Fridays and weekends, especially with the “early bird crowd.”  Most of the time, I’ll call in a takeout order and pick it up, bypassing the long lines that queue up.

On our most recent visit, I ordered two platters but decided to experiment a little, beyond the fried standards.  No matter what, the clams and oysters are served fried, along with the onion rings.  Here they are: 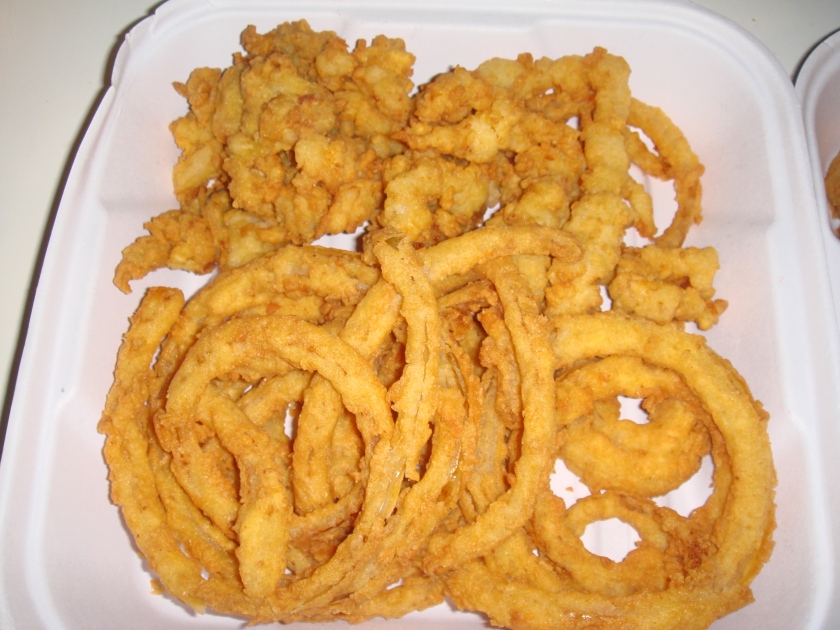 I would be remiss if I didn’t mention the onion rings, since this is a recurring Saboscrivner feature we like to call RING THE ALARM!  [Insert AIR HORN NOISE! here.]  A lot of people go ga-ga over Boston’s thin, crispy onion rings, sporting the same batter as their fried seafood.  I like them, I certainly enjoy eating them (usually dipped in their tartar sauce or ketchup), but I just can’t rank them among my favorite onion rings, which are generally more of a beer-battered style. 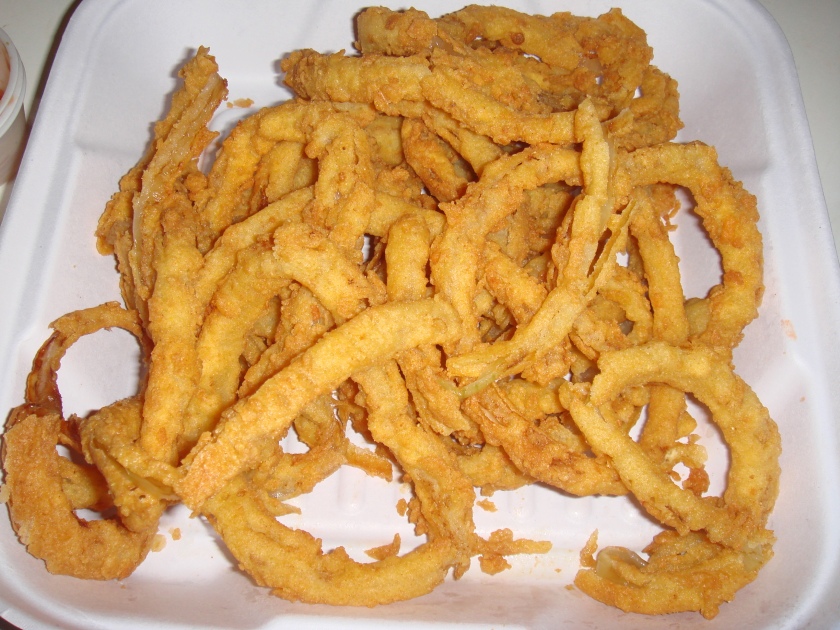 But moving past the fried stuff, you have some options with the shrimp and scallops, beyond just getting them dipped in the same old batter and fried.  One of our favorites is to get them broiled in butter and topped with crushed Ritz crackers, which happen to be my favorite crackers and the not-so-secret ingredient in my favorite pie recipe.  Here are those beautiful, buttery, broiled crustaceans and mollusks from my wife’s order:

I happened to be craving pasta this particular evening, so I thought I’d get the food home and make some fettuccine really quickly, then toss it with my shrimp and scallops that were broiled in garlic butter and white wine:

They came out great, needless to say.

Since we ordered two platters, we got four sides between them, and my wife and I both love the broccoli salad they make at Boston’s: crispy, fresh broccoli florets tossed in a sweet, creamy dressing with bacon, golden raisins, and pumpkin seeds.  It’s delicious and refreshing, and it makes us feel like we are eating slightly healthier, because broccoli.

But who are we kidding?  Between the plethora of fried foods, rich shellfish, and all that butter, they also make really nice garlic bread, which I can never refuse when we indulge at Boston’s: 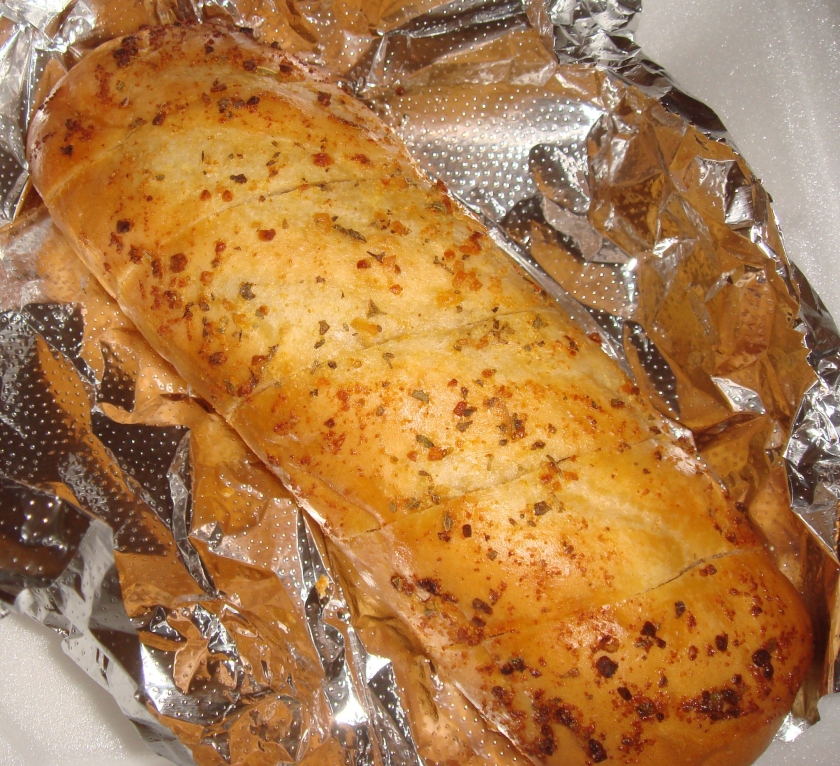 So that’s pretty much it.  I don’t even remember the last time we ate at the actual restaurant, but we live just close enough to Boston’s that the food is still hot by the time I get it home.  Always hot, and always good.  Stop by, just for the halibut.

And now I feel like I’m floundering, so I will clam up.