My intro to Jamaican culture came when I attended the University of Florida in the latter half of the ’90s.  I used to joke that every new UF student got a free copy of Bob Marley’s Legend CD and a Marley poster for their dorm rooms when they enrolled, because they were so ubiquitous on campus.  (Of course, college students today probably wouldn’t even know what to do with a CD.)  During my Gainesville days, I gravitated toward a different kind of Jamaican music: ska.  The mid-to-late ’90s era was the “third wave” of ska, when high school band geeks combined the traditional Jamaican dance music (usually much faster than reggae, with an emphasis on guitar upstrokes) with the speed and anarchic energy of punk rock.  So there were a lot of thrift store suits, skinny ties, retro-looking bowling shirts, and even a pair of black and white Doc Martens brogues in my checkered past (no pun intended), and I even played in a ska-punk band myself.

But as for the cuisine, I was poor as hell back then and definitely hadn’t developed the love for food and desire to try new things that drives me, over half my life later.  I don’t know how I developed my great love of Jamaican food.  My family certainly never ate it growing up in the suburbs of Miami.  However, along the way, I finally got exposed to the classic Jamaican dishes, and it was love at first bite.  I’m crazy about tender, juicy braised oxtails, brown stew chicken, jerk chicken and pork, and delicious spicy beef patties in their yellow, flaky crusts.  And my favorite local restaurant for getting my Jamaican fix is Golden Krust (http://www.orlandogoldenkrust.com/), particularly the location on Alafaya Trail near the 408 in East Orlando, across from Waterford Lakes.  There are three Orlando locations in all, plus a fourth in Clermont.

First, a little background.  Golden Krust Caribbean Bakery & Grill was founded by the late Lowell Hawthorne in The Bronx, New York.  The corporation distributes its perfect patties and other retail products to grocery stores around the U.S. (including our very own Publix, at least in Florida), and has over 120 restaurant franchise locations in nine states: Connecticut, Florida, Georgia, Massachusetts, Maryland, New Jersey, New York, North Carolina, and Texas.  The restaurants all carry lots of Jamaican groceries and baked goods, in addition to the cafeteria-style hot food menu.

Here’s the menu, posted above the counter.  Everything is very affordable, and the portions are gargantuan: 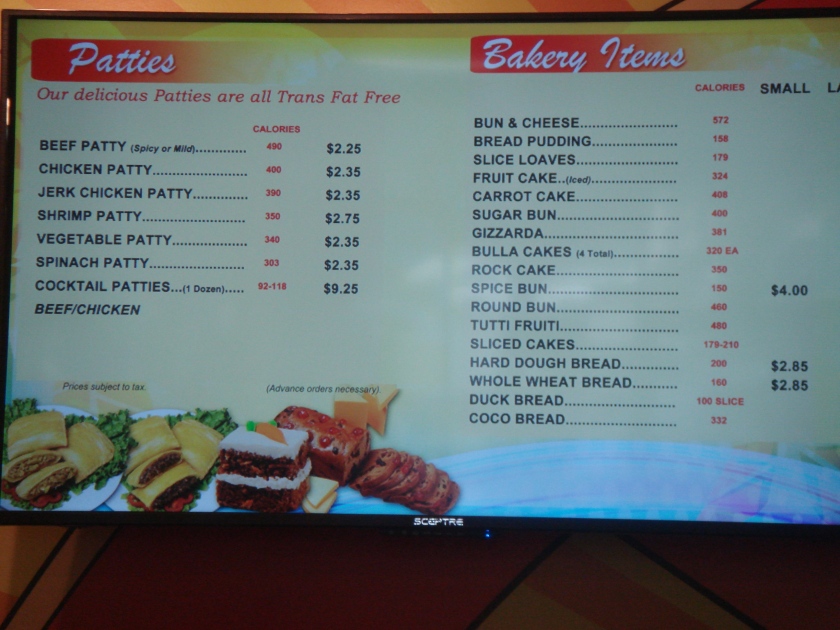 This is one of my favorite dishes from any cuisine, any culture: braised oxtails, served here with rice and peas and cabbage with mixed vegetables and my beloved sweet plantains.  This is one of my ultimate comfort foods.  I think I would rather eat oxtails than a steak!  I’ve made them at home before, but nothing ever comes out this well.  The meat is so tender, moist, juicy, unctious, yielding, flavorful.  It is NOT a spicy dish.  There is even a subtle sweetness to it, but don’t go in thinking all Jamaican food is breathe-fire spicy.  That couldn’t be further from the truth.

There is a lot of soft, chewy gelatin left on the irregularly-shaped bones, and that’s always worth sucking or gnawing off every morsel.  This is not a meal to order on a job interview or a first date (well, maybe a first date), but I’ve still eaten it at work, dressed in a full suit, always worried about a saucy piece of meat slipping out of my fingers and splattering me.  It’s a risk worth taking.

Here is a smaller, lunch-sized portion of brown stew chicken, also served with rice and peas and cabbage with mixed vegetables and sweet plantains.  This is some of the most tender and flavorful chicken I’ve ever had.  I’ve attempted to recreate this dish too, but they are the masters.

Really good baked macaroni and cheese, which I had somehow never tried at Golden Krust before: 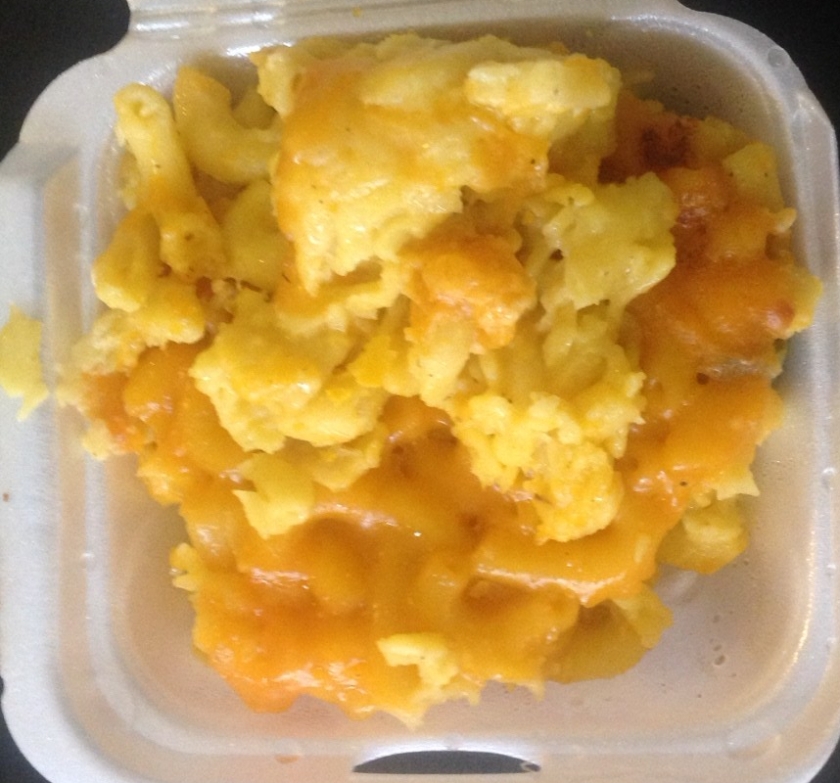 On a second, more recent trip, I got a spicy, flaky beef and cheese patty in their signature golden crust (Krust).  It is pictured on top of soft, fluffy coco bread, which you eat like a sandwich — meat wrapped in carbs wrapped in more carbs.

This was my first time trying the traditional breakfast dish of saltfish: flaky, sauteed salt cod, which was cooked with onions, bell peppers, tomatoes, and spices.  It had a nice spiciness, but nowhere close to as hot as you might be thinking.  It is Jamaica’s national dish.  Here it was served alongside spinach-like greens called callalou.  I liked the callalou even more than the usual stewed cabbage, and I would definitely order this combination again.  There are rice and peas underneath the saltfish and greens.

I also ordered a roti, which is a chewy, soft, tortilla-like wrap that is served with your choice of meat.  You can tear off pieces of the roti and use them to scoop up the meat or sauce.  It was prepared to order, folded into several layers, and stuffed with a crumbly, curry-flavored filling that was a pleasant surprise.

Of course I had to choose oxtail as my meat again, and between the roti and my rice and peas, I took care of every drop of that rich gravy.

I usually order a pineapple soda to accompany Jamaican food whenever I have it, or occasionally a refreshing grapefruit soda called Ting.  But this time I tried something new: a vanilla-flavored drink called Irish Moss, which is really thick and heavy from carageenan (red seaweed, a surprisingly common thickening ingredient in a lot of drinks and dairy products).  It tasted exactly like store-bought eggnog, and between being cool, creamy, and having that rich mouth-feel, it was perfect for cutting the heat.  You have to shake it really well, because otherwise you’ll end up with small, chewy chunks!

Upon conducting some post-meal research (only the best for The Saboscrivner’s baker’s dozens of readers!), I learned that these Irish Moss soft drinks are marketed as an aphrodisiac, particularly for men.  I guess the brand name “Big Bamboo” should have been a big damn clue.  I wasn’t feeling particularly amorous after such a large and heavy meal, or especially after such a thick and heavy beverage, but I thought it was ironic that it was vanilla-flavored, and I’m only into vanilla when it comes to food and drinks.