I promise my wife and I didn’t schlep all the way to New York to just eat Jewish deli food for our tenth anniversary trip, although that remains a huge part of The City’s culture and history, as well as its appeal for both of us.  I might be a secular, non-practicing Jew, but that food fills me with nostalgia for my childhood, as well as for early-to-mid 20th Century Jewish big city experiences I feel and relate to strongly, despite not being born yet.  Does that make sense?

I’ve written before about how food embodies our shared human experiences: our history, our politics, our economics, art, science, even religion.  And while I rarely feel like I fit in anywhere, I feel a sense of belonging to something larger and greater than myself when I nosh on a knish, a bagel with pickled fish, or a pastrami sandwich.  My wife indulges me, and she appreciates the food as well.  It might not feel like as big a deal if we could get all the same food at the same quality level at home, but we can’t, so going to the iconic originals, the legendary landmarks, the places that have survived a century because they’re that damn good, is a big damn deal.

My family was not what you might call “of the travelers.”  My parents, both teachers in the Miami-Dade County Public Schools, were (and still are, in retirement) hard-working, patient, generous, and awesome, but we never took many trips when I was younger.  That’s why when we went to New York in the summer of 1991, it was the most profound and transformative experience of my life thus far.  My dad is from Brooklyn — specifically the East New York neighborhood that hasn’t been gentrified and hipsterized like so many other parts of the borough — so I feel like New York is in my blood, despite never having lived there.

That was a whirlwind trip, indulgent for all of us.  My brother and I had never even flown before.  We stayed near Central Park (and even took a horse-drawn carriage ride through the Park, which I do not recommend), visited family in Brooklyn, took in museums, made a pilgrimage to the legendary comic book store Forbidden Planet (much larger back then than it is now, enough to blow my middle school mind with its two floors).  On top of that, we ate at great Jewish delis of decades past that have long since closed their doors: the Stage Deli, the Carnegie Deli, and Lindy’s in Manhattan, and Grabstein’s in Brooklyn.  Despite everything in the City feeling more decrepit and dangerous back then, it was an awe-inspiring and unforgettable trip that made a huge impact on my life.  I had always romanticized New York from my dad’s stories about growing up, my lifelong obsession with DC and Marvel Comics, and my teenage love affairs with jazz and punk music.  But after seeing, feeling, and tasting it for myself that summer, New York changed me forever.  I desperately wanted to go to NYU for film school, but obviously that never happened.  I spent the next 15+ years fantasizing about a return trip and everything I would do, see, and eat there.

Even though my parents would never consider themselves “foodies” (and often wonder how the hell I ended up like I did), I think our original New York trip sowed the seeds of my own desire for culinary capers and appetizing adventures.  I finally made it back to New York with my wife while we were just dating, and the post-9/11 City felt much cleaner and safer than it did in 1991.  That time we took in my first real Broadway shows and visited maybe the most iconic New York delicatessen of all, Katz’s Delicatessen (https://katzsdelicatessen.com/).  And we returned again, to the City and to Katz’s, for our honeymoon a few years later, in 2009.  Finally, a decade later, we were back once more. 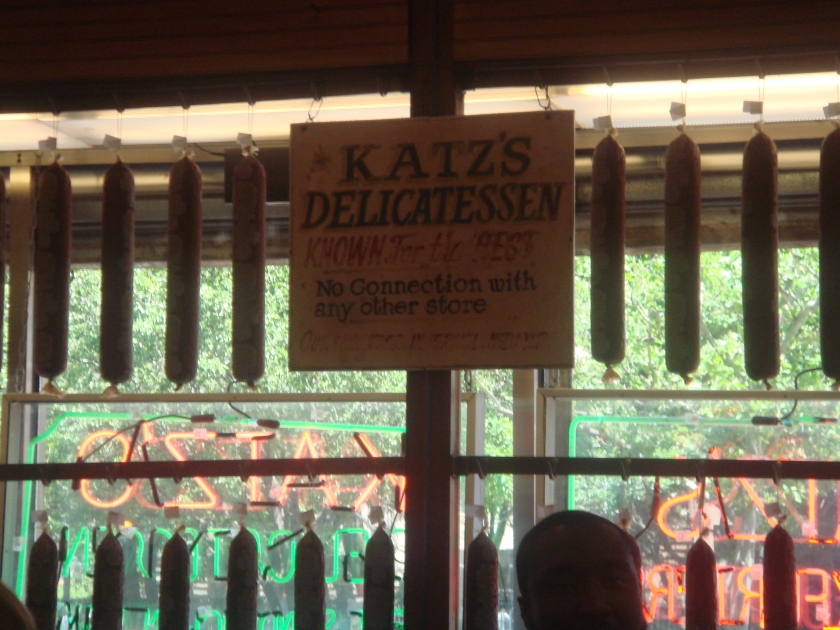 Katz’s feels chaotic when you’re a laid-back Floridian.  When you go in, you get a ticket, and then you can either get in line with one of the meat cutters behind the counter, or wait for a table with a waiter, who is usually cartoonishly brusque and rude (and yet, strangely charming).  I told my wife to grab an open table outside of the waiters’ section, and I lined up.  As you can see, it’s kind of a free-for-all.  They’ve been doing this for over a hundred years, but could there possibly be a better way to get everyone in and out?

When you finally get to the front of the line, if you order pastrami, the cutter will cut you a small slice on a plate, for you to sample.  Make sure you have a buck on hand for the customary tip.  Keep in mind, because they hand-slice the meat at Katz’s, it comes out much thicker and juicier than most sandwich shops with thin, machine-sliced pastrami.  Normally I prefer my deli meats sliced thin, but there’s nothing like this.

Anyway, here it is, the finest pastrami sandwich known to man, hand-sliced right in front of me.  I asked for a little fattier, juicier pastrami — none of that lean stuff for us.  A little helpful hint from your friendly neighborhood Saboscrivner: When you’re at Katz’s, pay the $1 upcharge and get your sandwich on a CLUB ROLL, dig me?  The rye bread they use is essentially an edible napkin, because it barely holds up under the weight and greasy juices of the copious amounts of cured and smoked meats.  The club roll is delicious, and it supports the meat and condiments better.  Rye is for suckas.

This was a $23 sandwich, but two healthy, hungry people can easily split it and be satisfied.  I added some of their mustard to my half and even dabbed a bit in a small plastic cup of Russian dressing, meant for their Reubens, but my wife would do no such thing.

Pickles are included.  Just as I did on my previous visit, ten years ago on our honeymoon, I tried both kinds, but just couldn’t get into them.  I am truly trying to develop a taste for pickles, but kosher dills and half-sours just don’t tickle my pickle. 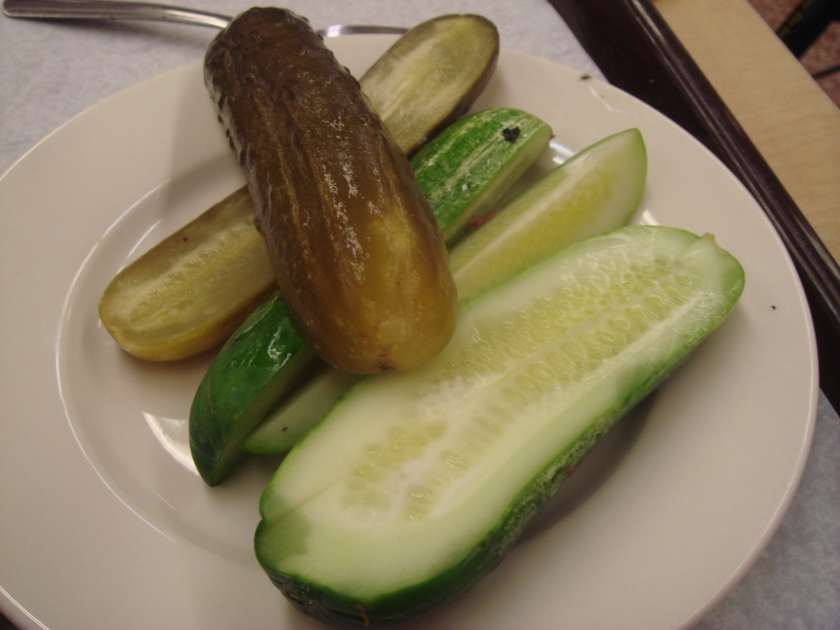 Anyway, leaving is a whole big production, because you have to present your ticket when you leave, then weave through the hangry crowd to get to the front.  But here’s another helpful hint: If you’re paying with a credit card, pay in the back.  We went to the front and waited to check out, only to find out they only accept cash up there.  Rather than force my wife to hustle back through the hungry, hangry hordes, I was lucky I had some sock money on hand (or in sock, to be accurate), so we settled up and escaped.

One thought on “The New York Adventure Part 6: Katz’s Delicatessen”