I used to joke that living in Casselberry, we almost always have to drive 20+ minutes to get to Orlando’s hottest restaurants in the hipper, trendier areas like Winter Park, the Milk District, and Mills 50.  But since we started sheltering in place due to the pandemic, I’ve tried to stay much closer to home the rare times I venture out for takeout, and I’ve come to discover a lot of nearby gems like Alex’s Fresh Kitchen and Tomasino’s Pizza in recent reviews, alongside neighborhood favorites like Bagel King, Waffle House, and Kai Asian Street Fare.

I was overjoyed when my choice for Orlando’s best barbecue, Git-N-Messy BBQ, relocated from Sanford to the edge of Winter Park and Oviedo, much closer to us.  And since we started quarantining, I’ve picked up takeout from Git-N-Messy several times.  Best of all, there is a relatively new bakery right across the street from Git-N-Messy, in the same shopping center as Pho Cali/Quickly Boba and Twisted Root Burger Co.  It’s a small Asian bakery called Light on the Sugar (https://www.lightonthesugar.com/), and it is so good, we’re still in shock that it opened on our side of town and not one of these hipster neighborhoods.

My wife and I first visited Light on the Sugar on our way to have dinner at Tomasino’s for the first time in mid-January of this year, back when you could still linger at restaurants, cafes, and even bakeries without a second thought.  We were face to face with glass cases full of beautiful baked goods — cakes, cream puffs, croissants, danishes, and more.  The bakery was already getting excellent word of mouth on the Orlando Foodie Forum on Facebook, so we were excited to be there and trying to take our time deciding what to bring home with us. 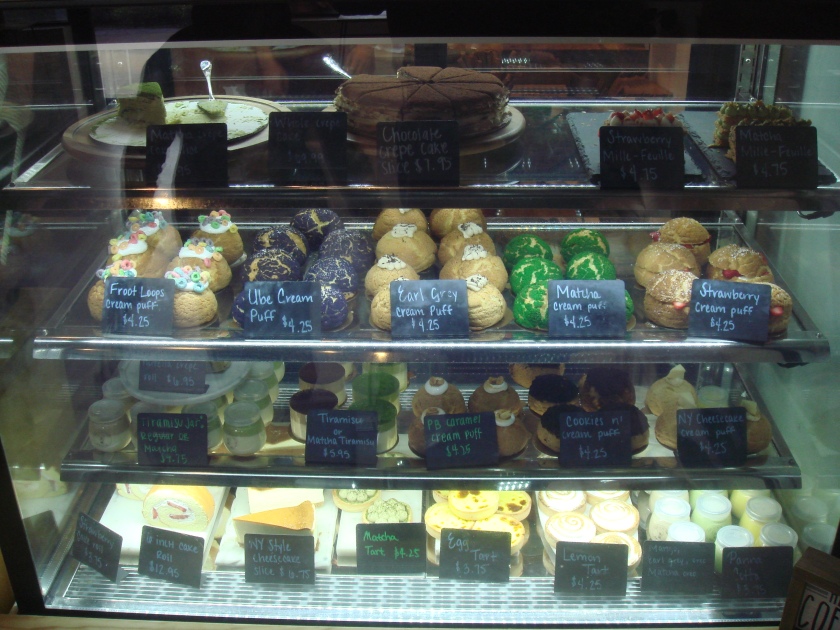 Even more choices (pardon the reflections): 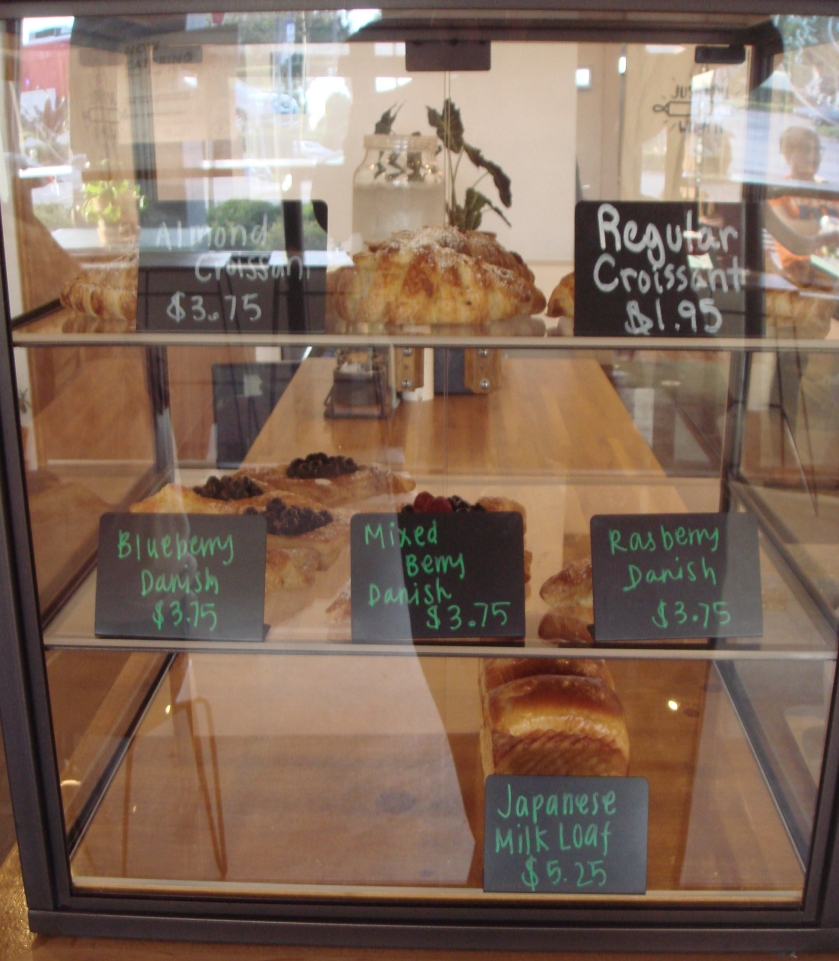 Unfortunately, I left this first visit very annoyed, due to an employee who was relentlessly rushing us to make a quick decision.  The place was empty aside from us, so it’s not like we were holding anyone else up.  And we had every intention of choosing quite a few treats to bring home, so the guy’s rude attitude really got on my nerves.  We made our choices and went on to dinner, both turned off by the experience.  In fact, I might have not returned at all, except that everything was so amazing.  My wife had fallen for these delectable, decadent desserts, so that inauspicious first visit became the first of many over a relatively short time.

This was what we brought home the first time: a cream puff topped with Froot Loops, a slice of their beautiful and intricate chocolate crepe cake, and a plain croissant.

I liked the bites I tried of things, but she just went wild for them.  The cream puff is so light and delicate, but the rich cream in the middle is really something special.  As you saw in the first photo, they have many different varieties of cream puffs on any given day, including strawberry, matcha, ube (purple yam, taking off in popularity here in the States), and Earl Grey, but she loves her sugary cereals.  And the chocolate crepe cake, made of dozens of layers of thin crepes, also wowed my chocolate-loving wife.

On one of my many subsequent visits after picking up takeout from Git-N-Messy BBQ across the street, they didn’t have the Froot Loops cream puffs she loves, but I was able to bring her comparable Lucky Charms cream puffs that were also a big hit at home.

You can tell these baked goods are all fresh and of the highest quality, but none of them are cloyingly, overwhelmingly sweet… hence the name.  They are also less heavy than baked goods from some other bakeries (4 Rivers Smokehouse’s Sweet Shop comes to mind) — these are almost ethereal, by comparison.

I’ve also been lucky enough to find a Japanese milk loaf on a few of my visits to Light on the Sugar, and I can never resist bringing one home.  This loaf of bread is rich and buttery, like a cross between brioche and challah.  It makes great French toast, or it’s perfect to just slice and enjoy with some good salted butter.

I should note that Winter Park’s Bread & Co., another very good Asian bakery, also bakes a Japanese-style milk bread that I love, but my wife prefers Light on the Sugar’s version.

And I should also note that on the multiple visits I’ve made since that first unnecessarily stressful visit with my wife, I have received nothing but friendly and warm service from several female employees.  I haven’t seen that one rude guy again since, and he may not even still be there.  Since everything is takeout only these days, I’m usually in and out in two minutes, especially now that I know what my wife likes best.  But it’s a great bakery and well worth a visit, whether you live in our quieter part of town, or even if you’re surrounded by Orlando’s other good bakeries in the cooler areas.  Like every other restaurant we like, I hope they’ve been holding up through this scary and unknowable time.  But the best way to save the places and things you love is to actually support them, so stop by Light on the Sugar soon and try a few things.  You might even plan your visit around picking up some other takeout at any of the great nearby restaurants, who all need your support as well.