Twisted Root Burger Co. (https://www.twistedrootburgerco.com/) is the latest fast-casual burger chain out of Texas to come to Orlando, after Hopdoddy Burger Bar opened earlier this year in the Pointe Orlando mall on International Drive.  But luckily for us, Twisted Root opened much closer to where we live, in a little shopping center on Aloma Avenue and Howell Branch Road that has been brought back to life by an influx of new restaurants, including the adjoining Pho Cali and Quickly Boba, which I reviewed in 2018.

Twisted Root goes for a theme of irreverent, wacky fun, with animal head busts above the counter where you order, letting you know which ones are available to eat on any given day.  From right to left: 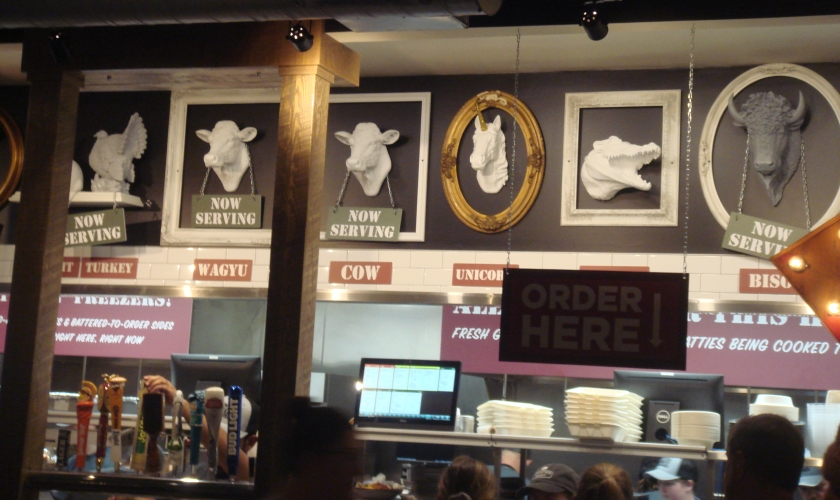 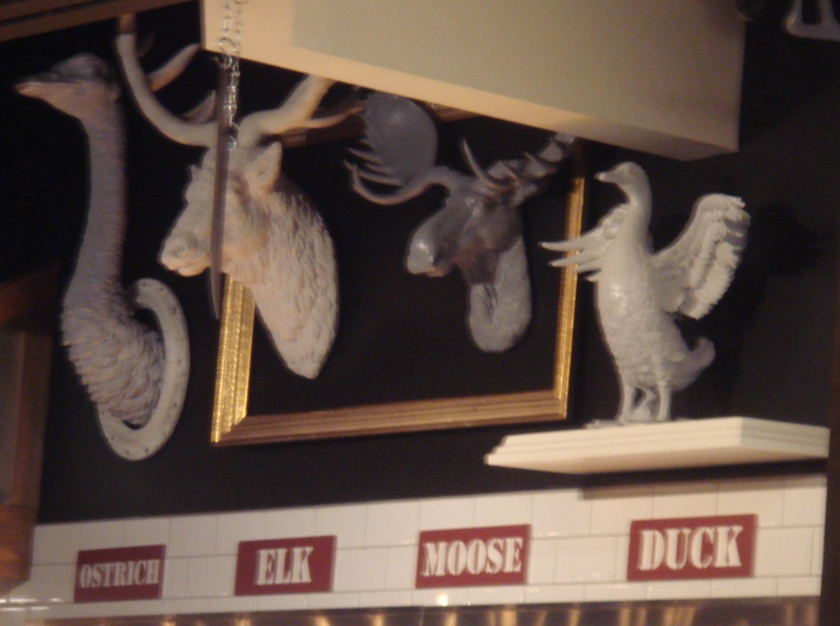 After you place your order, you can go get drinks.  There is a full bar, and more options than usual for the non-drinkers.  I love hip hop and my wife loves Law and Order: SVU, so this was a delightful display:

Twisted Root serves its own fountain sodas, all made with cane sugar instead of the usual high fructose corn syrup.  I sampled sips of the watermelon Ice-T, cream soda, root beer, and lemonade, and the cream soda was my favorite.  A refillable drink is $2.25, by the way.  I think that would be worth it for most, just to try their versions of all the different sodas and teas.

Pass the soda fountain and you will encounter the pickle bar.  I’ve written before about how I’ve never been a big fan of pickles, but I’m all about trying them now, to grow my appreciation for them.  Needless to say, I had to try all five varieties here, especially since they’re free!  From left to right: atomic (spicy), sweet & spicy, ranch, bread & butter, and dill.  I think I liked the bread & butter pickles the most, and there was only one flavor I really disliked — I think it was probably the ranch.

This was a nice feature, especially because I’m not willing to shell out for whole jars of pickles I might not like, the way I do with mustards and other condiments (and new flavors of chips and sodas).

When you order, they give you a buzzer with a pop culture icon on it to alert you that your food is ready to pick up from the counter.  We got Dwayne “The Rock” Johnson, which was aces with me, because I used to be a huge pro wrestling fan and am slowly wading back into that pool, and also because he elevates almost every movie he’s in.  Seriously, The Rock makes decent movies better and terrible movies tolerable.

When our buzzer went off so quickly, I was surprised our food was already ready, since the place was so slammed they had shut down one of their cash registers to give the kitchen a chance to catch up.  But it was just my wife’s s’mores milkshake ($6).

Her verdict: it was okay.  She thought the marshmallow tasted like lighter fluid.  I had some and liked it fine, I think even more than she did.  But I could take or leave marshmallows, whereas she is a connoisseur.

It didn’t take that much longer for The Rock to buzz us again, letting me know our food was ready.  I ordered the Freedom Melt ($11), served on “Texas toast” with cheddar cheese, lettuce, tomato, fried onion straws, and brisket on top — a very “me” burger to order.  Be forewarned that Twisted Root cooks all burgers MEDIUM WELL unless you ask them not to, and I’m not down with that.  I asked for mine medium rare, and it came out between medium rare and medium, but still very juicy. 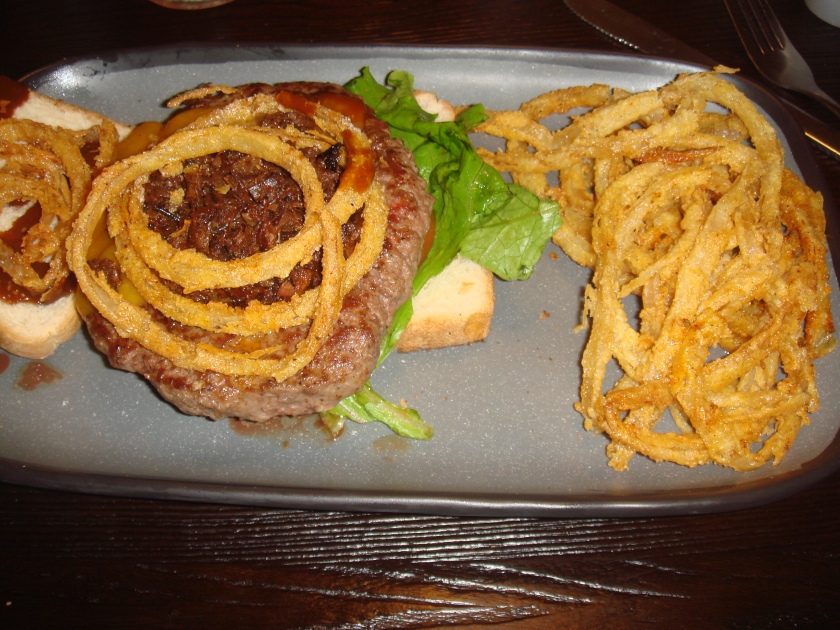 I’ve been spoiled by too much great barbecue brisket, at our well-respected homegrown chain 4 Rivers Smokehouse, and most recently, at the fantastic Git-N-Messy Barbecue in Sanford.  So I guess I was expecting shredded (but recognizable) brisket on top of my burger, instead of the finely-chopped (and probably sauced) meat I got.  It was tastier than I expected and definitely tastier than it looked, nice and smoky (again, possibly from the sauce), but it reminded me of really tender chopped beef jerky even more than brisket.

I haven’t done a

feature in a while, but Twisted Root offers fried onion strings ($3), and those count!  They were good — never as satisfying or substantial as thicker-cut, beer-battered onion rings, but they added a good dimension to my burger and gave me stuff to dip (more on that later).

My wife ordered a venison burger ($10), one of the special game meats, on “Texas toast,” otherwise served plain.  I didn’t get a picture of it, but it looked like pretty much any other burger.  She ate the whole thing, which is a good sign that she liked it.  She ordered hand-cut potato chips ($2) as her side, a nice-sized order of crispy (not overly crunchy) chips that were just salty enough.  I had to help her finish those, happily.

A friendly manager came by to ask us how we were liking everything, and she was really craving honest feedback.  The ONLY complaint I had, and it’s a minor one, was that the “Texas toast” wasn’t what we were expecting.  I really love getting Texas toast at my beloved Waffle House — thick slices of white Wonder bread, spread liberally with butter and then grilled on both sides.  The “Texas toast” both of our burgers came on was just regular white bread: not thick, not square, not Wonder, definitely not buttered or grilled, and barely even toasted.  I always hate to complain about anything, but she asked, and it was a minor quibble.  I think thicker bread, buttered and grilled, would add so much richness to the burgers.  If they don’t change it, I’ll simply order a brioche bun with my burger on my next visit.

I was already digging Twisted Root offering so many choices (sodas, sides, pickles), but their condiment game is also strong.  Every table has squeeze bottles of Heinz ketchup and yellow mustard, plus these three beauties.  The horseradish Dijon mustard was fabulous (I’d buy a jar), the ancho chipotle ketchup was great, but as much as I love root beer AND barbecue sauce, I thought it was a little too thin and tasted a little too much of molasses.

So this restaurant is a real “get” for our quiet, boring little area where Winter Springs, Oviedo, and Winter Park run together.  It was super-busy when we were there, but that was also a Friday night on its opening week.  I think they will do very well, especially since the shopping center has returned to life.  I liked my burger much more than some of the more popular fast-casual contenders, and I love all the different options and how close it is to our home.

Oh, one last thing: the men’s restroom is wallpapered with silly memes and sayings about the most overrated action movie “star” of all time, which I feel obligated to point out after praising the career of Dwayne “The Rock” Johnson earlier in this review.  Yes, you can’t wash your hands without being inundated with tall tales of Texas’ own adopted son Chuck Norris, who I don’t think ever made a good movie or TV show.  I don’t know how beatifying Chuck Norris became a thing.  Sure, he was a legit martial artist, unlike many of the other action actors of the ’70s and ’80s, but Norris was a charisma vacuum, compared to Arnold Schwarzenegger, Bruce Willis, Keanu Reeves, Jason Statham, The Rock, and the vast majority of superhero actors.  Heck, even Jean-Claude Van Damme had two great (or at least memorable) movies in his career, and if any Saboscrivner readers think you can guess what they are, then let me know!