When something is underground, that automatically makes it cooler, hipper, edgier.  Think of underground comics (or “comix,” if you really want to be underground), or underground parties or concerts.  Not everyone knows about them, so you’re automatically cooler, hipper, and edgier if you do.  So if you’re in the mood for high-quality, local pizza, delivered fresh to your doorstep, Orlando’s hottest pizza is Brad’s Underground Pizza (https://www.instagram.com/brads_underground_pizzeria/).  You order by sliding into the DMs on Brad’s Instagram page (that’s what the kids say, right?), and Brad himself will deliver it to you, within a 15-mile radius of Maitland.  He accepts Venmo (which I don’t have) and cash, but no credit cards at the moment, so keep that in mind too.  There is no pickup from a location at this time due to COVID concerns, so even though I actually like picking up takeout and rarely have food delivered, this was one time where I didn’t have a choice and really didn’t mind.

This is the double-decker pizza (normally $16, but we added pepperoni and sausage for $1 each).  Brad also serves Chicago-style deep dish pizza (also $16) and thin crust pizza ($12), but the double-decker sounded the most unique, and was definitely the prettiest on Instagram due to the braided crust. 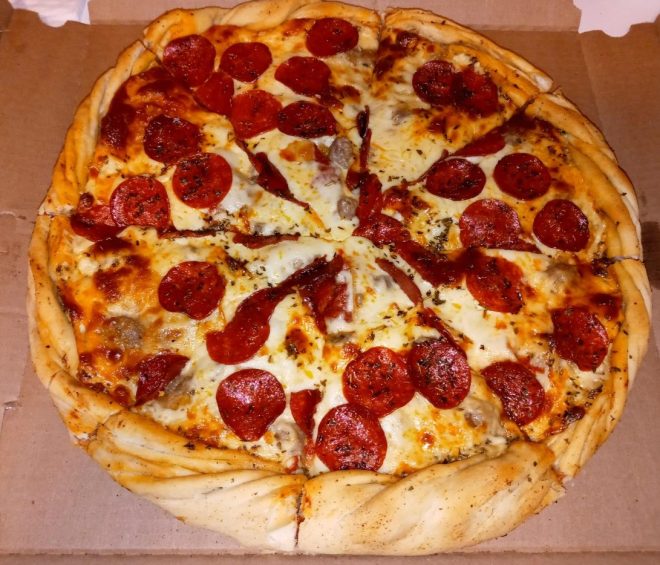 The double-decker pizza is literally two thin-crust pizzas stacked on top of each other, connected by that beautiful soft braided crust.

Here’s a cross-section, so you can see the two thin-crust pizzas stacked on top of each other, with a rich, robust red sauce in between.  I get annoyed that the sauce is usually the pizza ingredient that gets short shrift — there’s either not enough sauce, or it’s an obvious afterthought, or both.  But Brad’s pizza was saucy, and it was nice to have a bit that dripped out to dip that gorgeous crust into.

I do want to caution you that Brad’s Underground Pizza is blowing up right now, so plan to place your order in advance.  I don’t mean an hour in advance, but maybe a day or two in advance.  Consider placing an order for your Sunday game day pizza party on Friday, just due to demand and delays.  I was very lucky to get my pizza delivered the same night I ordered it, but that was thanks to a friend interceding on my behalf — a friend who is much cooler, hipper, and edgier than I, who had already discovered Brad’s incredible pizza and was a repeat customer.  Now that I’m part of the underground scene, I intend to become a regular as well.

Eventually, due to hype and buzz, so many underground movements end up hitting the mainstream, influencing mainstream culture and changing it for the better, and Brad’s pizza is far too good to stay a purely underground phenomenon for long.  I have to admit, it’s kind of nice to have someone bring you your food, after a lifetime of making it or going to get it.  I guess Ben Folds was right: “We can be happy underground.”