Before the end of 2018, I was able to meet a large group of Orlando Foodie Forum members at one of Orlando’s hottest (no pun intended restaurants), Taste of Chengdu.  Connected to a Best Western hotel west of downtown Orlando on West Colonial Drive, Taste of Chengdu has emerged as one of our best and most innovative Chinese restaurants, with Chef Tiger Tang specializing in spicy Szechuan cuisine.  This is not a place to go for glistening honey garlic chicken, sticky-sweet spareribs, greasy fried egg rolls, or a buffet with crab rangoons and Jell-O for dessert (although they do have a handful of more Americanized dishes available).  In fact, it might be a little intimidating for those with unadventurous palates and anyone who prefers their food non-spicy.  But it’s a fantastic restaurant if you want to try new things and exciting, unfamiliar variations on Chinese classics.

The lunch organizer worked it out with Chef Tiger in advance that he would send a bunch of dishes out of the kitchen for us to pass around and share, family-style, and we would each pay a flat fee of $20, plus tax.  It was a real bargain, as there would be no way to ever try this many dishes in one sitting under normal circumstances.  Some of these were regular menu items, and some were his new and innovative creations, just for our gathering of intrepid eaters.

So since I don’t have official titles for everything, my descriptions that follow are the best I could do.

Cold boiled chicken in a spicy chili sauce with sesame seeds and scallions:

Bamboo!  And while I was expecting this to be woody and fibrous and awful, it was delicious.  It reminded me a lot of rich, chewy, meaty mushrooms, which I cannot eat due to some digestive allergy.  I think vegetarians would love this dish, and I surprised myself by really liking it.

Cool sliced cucumbers in a garlicky sauce.  An excellent palate cleanser between the dish that preceded it and the one that followed.  It never would have occurred to me to order a cucumber dish at a Chinese restaurant, but they were cool, fresh, and crispy and well with everything else we tried.

Green tea fried rice with bacon.  Loved it!  I always order fried rice at pretty much any Chinese restaurant, and this one was one of the better fried rice dishes I’ve tried anywhere.

This was a duck dish that everyone around our large table devoured.  The duck was sliced thin and pan-fried, extremely soft and tender, not greasy at all. It was served in a brown sauce with green leeks.

These stir-fried shrimp, in a spicy sauce similar to dan dan sauce with finely-minced pork, might have been my favorite dish of the entire lunch.  The shrimp were huge, with lightly crispy outsides from the frying process.  Apparently Chef Tiger normally serves these in the shell, with heads and legs and everything, but was kind enough to de-shell them for our group.  Shell yeah! 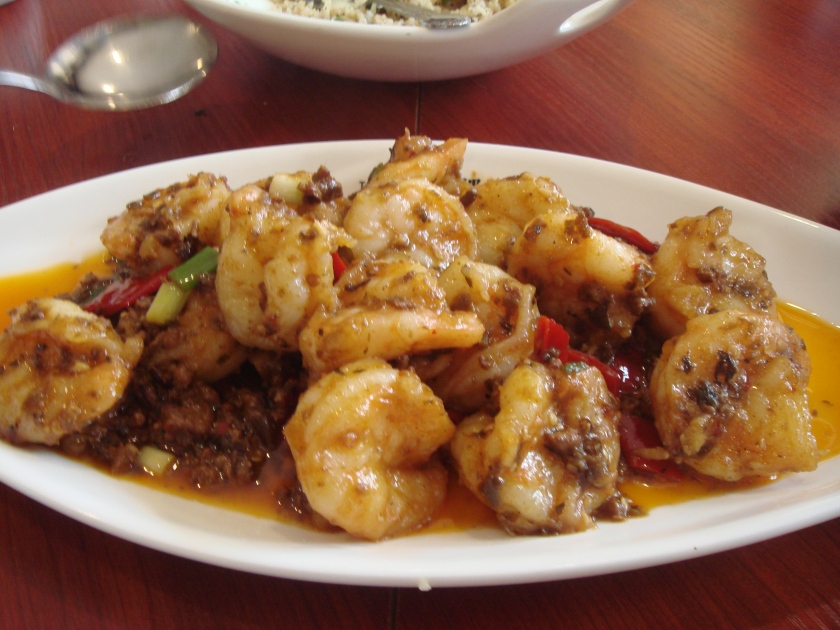 A “hot pot” of spicy, crispy, breaded fried fish, with onions, potatoes, peppers, and lotus root (the first time I had ever tried lotus root).  If you’ve ever tried the la zi fish at Chuan Lu Garden, this was similar, but a lot better.  It was spiced with the Szechuan peppercorns that deliver a tingling, numbing, almost metallic sensation to your lips and tongue, which is more pleasant than it sounds. 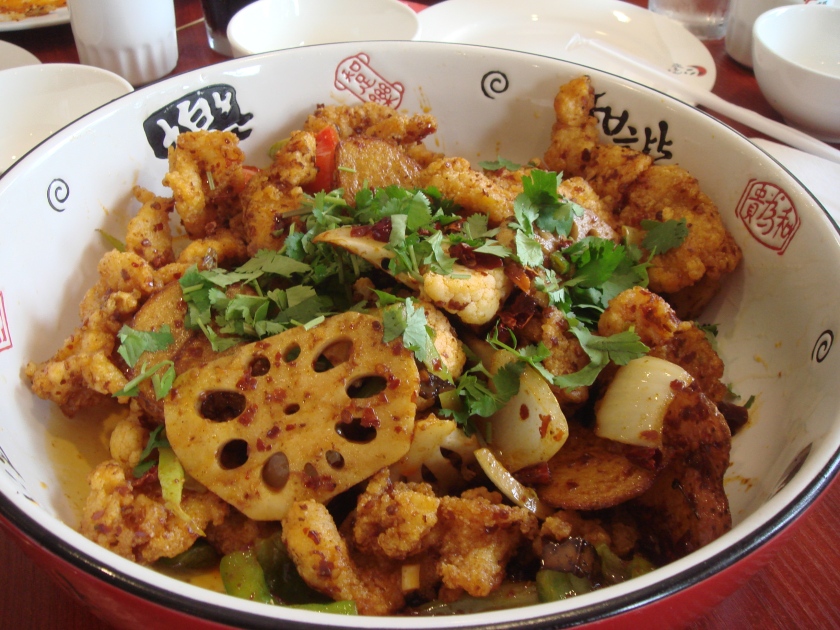 Whole fried snapper in a tomatoey sweet and sour sauce with a spicy dimension to it.  One of my fellow diners was cool enough to filet the fish for everyone, making it a heck of a lot easier to share and eat.  Another one of the best dishes that I admit would probably have intimidated me as a solo diner.

Wok-seared green beans, better than green beans have any right to be:

Finally, Szechuan wontons in chili oil — some of the finest damn wontons ever.  I could have easily eaten a whole big bowl just of these, but this was a lunch of sampling, so I made do with these two.

I NEVER make it west of downtown, so there’s a whole side of Orlando I need to explore for more Saboscrivner-worthy dining.  But I had been reading so many rave reviews for Taste of Chengdu for so much of 2018, I’m glad I finally got to get in there before the year was over and share all these delicious dishes with my fellow foodies.  If you don’t mind spicy food, especially trying new things, definitely hit up Taste of Chengdu.  Whatever you order will be top-notch, under the watchful eye of Chef Tiger.

For years, I’ve been a regular poster on the Orlando Foodie Forum on Facebook (https://www.facebook.com/groups/orlandofoodieforum/), which is a pretty great community.  That led to me being invited to contribute a piece to the Orlando Weekly at the end of last year, listing my five favorite local dishes of 2017.  So here it is:
https://www.orlandoweekly.com/orlando/orlandos-best-new-dishes-of-2017/Content?oid=9614809

Getting published as a real, professional food writer was one of the proudest moments of my life, and I still stand by this list of local favorites.