Even though I have discovered the glory of Taste of Chengdu and Chef Wang’s Kitchen over the last few months, I always end up returning to one of my favorite Chinese restaurants in Orlando, Chuan Lu Garden (http://www.chuanluorlando.com/).  There are two locations: one at the heart of the Mills 50 District, Orlando’s best neighborhood for dining out, and a newer one in east Orlando on Alafaya Trail, closer to UCF

Like Taste of Chengdu, fewer than 15 minutes away, Chuan Lu Garden specializes in spicy Szechuan cuisine, with peppercorns that numb your mouth and make everything tingle. It’s a different kind of heat than what most hot sauce heroes and chile cheerleaders are used to, but those flavors are highlighted in several dishes throughout the lengthy menu, like la zi chicken and la zi fish (crispy fried, breaded pieces that bring the tingle). I appreciate some heat some of the time, but I tend to play it safer and stick to the delicious hand-cut and hand-pulled noodle offerings.

This review is based on several visits over the last few months:

Visit #1: We met dear friends from Gainesville who were in town with tickets to see Hamilton.  Unfortunately, I am an idiot and gave them directions to the wrong Chuan Lu Garden location.  They drove all the way to east Orlando, when we were waiting for them near downtown, chosen purposely to put them near the theater.  But they are badasses who didn’t sweat it and weren’t even mad at me.  They made it to where we were in 15 minutes flat, and I ordered some vegetarian dishes for them in the meantime.  (I treated them to dinner too, but I was planning to do that anyway, even before I almost ruined their night and put them in danger of missing the greatest musical of all time.)

I ordered myself one of my favorite dishes on the menu, cumin lamb, which is much less blurry in person:

My wife’s noodle soup with roast duck, the dish that finally won her over after years of me hyping up Chuan Lu Garden, making her a devoted fan: 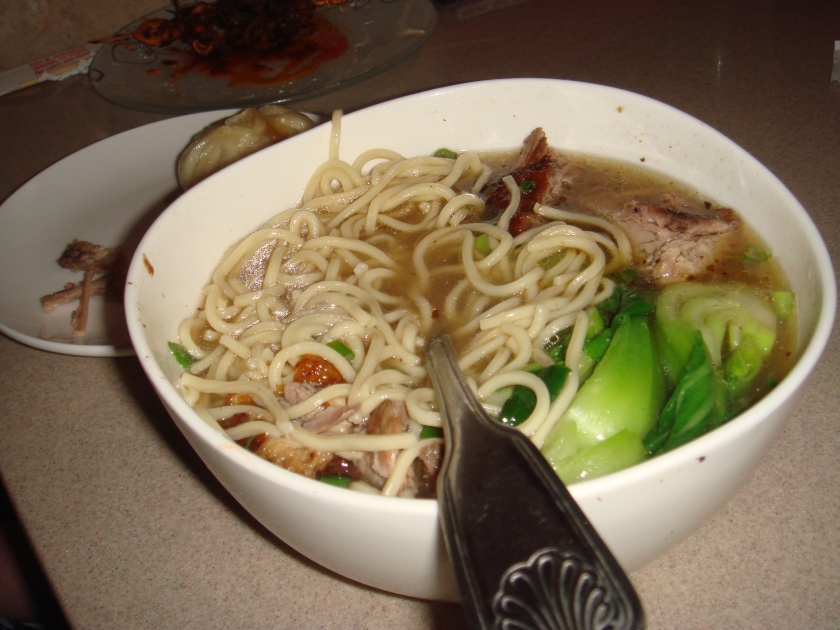 Fried tofu with vegetables and the remnants of vegetable fried rice, after the four of us mostly devoured it:

Maybe the best Singapore mei fun noodles I’ve ever ordered anywhere, though curiously not very spicy compared to some others I’ve had.  These noodles were thin and ethereal, reminding me almost of cotton candy threads (although obviously neither sticky nor sweet).  I couldn’t get enough of them, and even my wife was amazed by their lighter-than-air texture and great flavor. 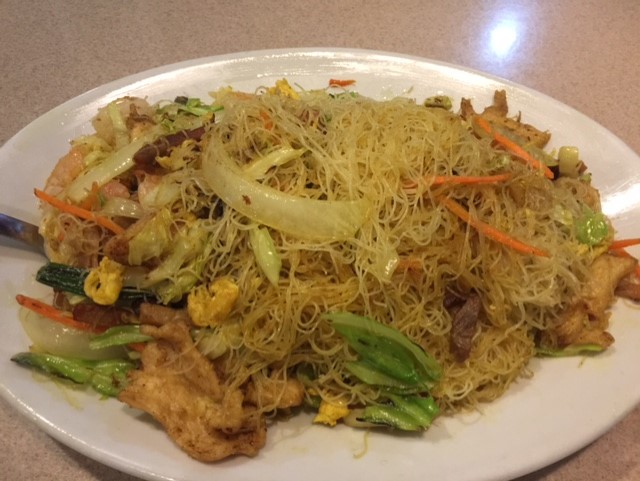 And a roast duck appetizer, full of tiny little bones to watch out for: 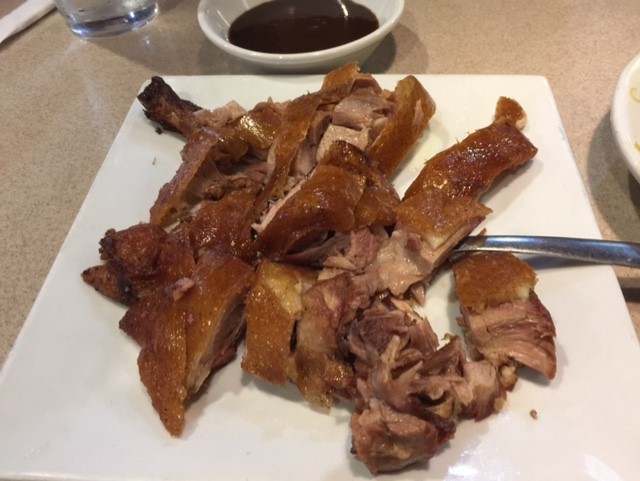 For the first time ever in my experiences at Chuan Lu Garden, they presented us with a separate dim sum menu.  Having been recently introduced to egg custard tarts by one of my favorite local foodies, I had to pay it forward and order them to share with my wife.  She loved them, like flaky little custard pies. 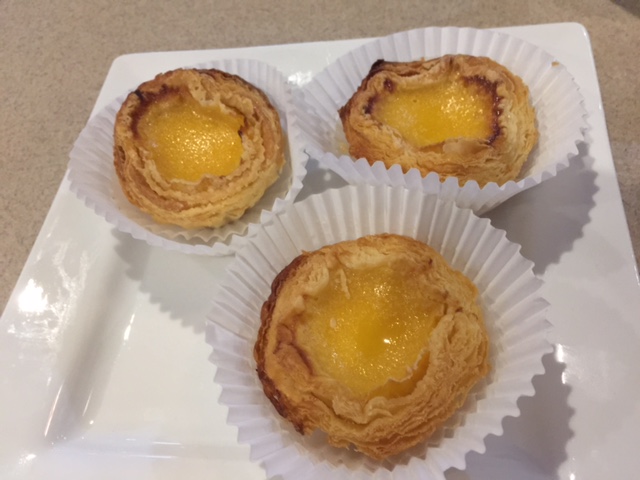 I ordered one of my favorite dishes on the menu: dan dan noodles with spicy ground pork, served with thin-sliced cucumbers that do a great job counterbalancing the chili oil with their own crunchy coolness.

My wife’s roast duck noodle soup, take three, but this time with the wide, flat noodles: 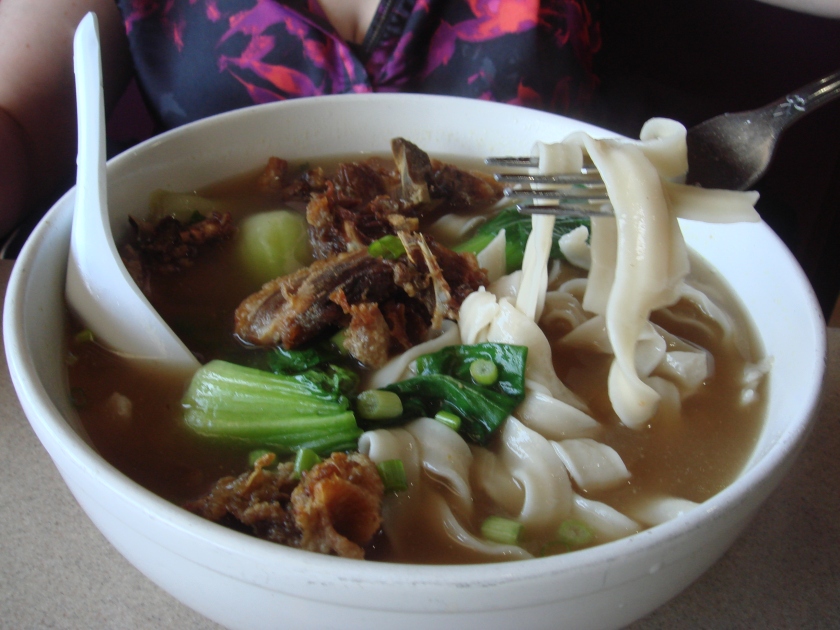 More of that quacktacular roast duck:

And one of my favorite dishes here, the onion pancake, which is much more like a thick paratha or super-thick flour tortilla than an American-style pancake.  The outside is crispy, but the inside has a wonderful, rich, buttery crispness, with scallions baked into it. 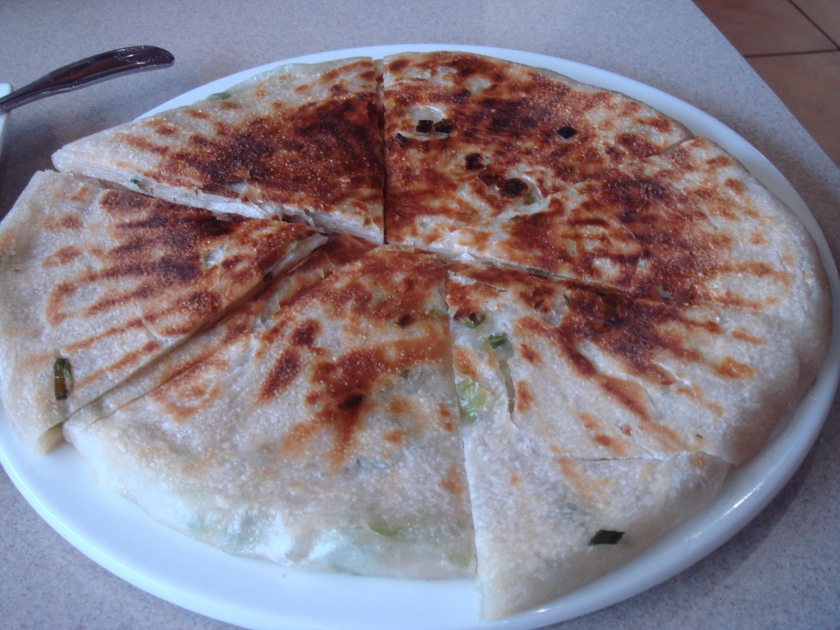 Since I originally wrote this blog entry, I have brought her home roast duck noodle soup a few more times, often with an extra order of duck to go with it.  She loves it, and what’s not to love?

And guess what, fearless Saboscrivnerinos? Chuan Lu Garden now has a full dim sum menu, including the coveted soup dumplings! I haven’t tried them there yet, but how can you go wrong? It’s SOUP… in a DUMPLING!