It could be said that poke is having a moment.  The Hawaiian dish consists of cubes of fresh raw fish, marinated with sauces and seasonings and served over rice with a variety of toppings.  If you like sushi, there’s no reason you wouldn’t love poke too.   Plus, poke bowls are infinitely customizable, and these days, diners crave quick, healthy meals they can get made to their specifications.

Orlando already has several poke options, including several locations of the excellent Da Kine Poke, the related Big Kahuna and Island Fin Poke, Bento Cafe (which was serving poke-style don bowls for several years), and even Costco offers high-quality, authentically Hawaiian ahi tuna poke every once in a while.  Most of these poke joints (aside from Costco) follow the assembly line model popularized by Chipotle and several fast-casual Greek and Middle Eastern restaurants, in which you choose your base (white or brown rice, sometimes salad greens), your protein (ahi tuna, other fish, or tofu), and your toppings and sauces.

Orlando’s newest poke place is my current favorite, Poke Hana (https://www.poke-hana.com/), located on East Colonial Drive right at the Mills Avenue intersection, one of our greatest foodie neighborhoods in the city.  I believe they opened in late August or early September.  They have a large, bright restaurant space with a lot of natural light and an easy-to-miss parking lot in the back, to avoid the hassle and danger of trying to parallel-park in one of the few spots along busy Colonial Drive.  I’ve been there twice now, and I’m a little obsessed with it at the moment.

At Poke Hana, you can choose from white or brown rice or mixed greens for your base, and ahi tuna, salmon, hamachi (yellowtail), and tako (octopus) for your seafood proteins.  I’ve been twice now, and I’ve asked for half-ahi and half-salmon both times.  These bowls are a reasonable $13 each.  They also have non-seafood protein options: Hawaiian-style kalua pulled pork, hula chicken, garlic shrimp (shell-on), and fried tofu.  I haven’t tried any of these yet, although I can’t wait to try the kalua pork.  They also have Spam musubi, another Hawaiian specialty with a rectangular slice of fried Spam served over a pillow of chilled, seasoned sticky rice, like a larger piece of nigiri sushi.

Now you have to choose a sauce: shoyu (soy sauce with ginger), Maui (traditional Hawaiian-style, with some finely-chopped macadamia nuts and chili flakes for a bit of heat), spicy (my favorite, a sriracha aioli with tiny orange masago fish eggs, like the spicy mayo that often accompanies sushi rolls), and a Korean-style kimchi.  Some of the poke places serve the sauce on the side or squirt it on top, but Poke Hana mixes it together with your protein of choice before serving it to you, which I appreciate, because I would just do that anyway.

And while other poke restaurants usually have a long list of toppings, Poke Hana keeps it simple and traditional.  As much as I’ve loved having the option of diced mango, sliced avocado, or crispy fried onions over my poke elsewhere, you only get three toppings at Poke Hana: thin-sliced pickled cucumbers (which I love, despite not being a huge pickle fan, although I’m trying to learn to appreciate pickles more), edamame (those green soybeans), and seaweed salad.  I must admit, I’ve never been into edamame or seaweed salad, so after trying them on my first visit, I asked to hold those but to get extra pickled cucumbers on my second visit.

The poke bowl isn’t the largest, but it is very satisfying and filling.  Everything is fresh, and the flavors and textures work perfectly together.  I could easily have eaten two, or a portion twice its size, but who needs that?  Then again, that isn’t all I ate!

I also tried a side order of macaroni salad.  My constant readers know how much I love onion rings, to the point where I feel obligated to sample them anywhere they’re on the menu.  I have a few other foods I’m like that with: chili (WHY?  Because everyone’s chili is a little bit different!), root beer (same), and pasta and/or macaroni salads.  Hawaiian-style macaroni salad is mayo-based (usually Best Foods, which is sold as Hellman’s in the eastern U.S.), and there is a slight sweetness to it.  My lifelong gold standard for a mayo-based macaroni salad is from Publix supermarket, but the macaroni salad at Poke Hana is my new favorite.  It’s pretty simple, but it does have some nice orange accents from finely-shredded carrot, and the elbow noodles were surprisingly al dente.  It was a damn fine macaroni salad, and I’m sure it would go great with the kalua pork sliders, served on pillowy-soft, sweet Hawaiian rolls  (my favorites for making bison sliders at home).

I love tropical fruit.  I could take or leave boring apples (including apple juice), but I have a hard time saying no to anything involving pineapple, mango, or guava.  Maybe it’s because I was raised in Miami.  Now that I’m an altacocker and acid reflux is a recurring concern, I must be careful, but I wasn’t going to turn down the Hawaiian Sun tropical fruit drinks that Poke Hana offers.  I couldn’t decide between guava nectar and lilikoi (passion fruit) juice, so I got a can of each, drank one with my meal, and drank the other one in my car on the way back to work.  The guava nectar was fine, with a little bit of grittiness you should expect from guava nectar, but the passion fruit drink was so sweet and tart and refreshing and awesome.  I’ve never had it before, but it quickly became a favorite.  I don’t drink, but I have to imagine it would be amazing mixed with rum, vodka, or maybe even tequila.

Finally, since this was my first visit and I planned to review it, I had to try one of the desserts: haupia pie.  It consists of three freshly-fried spring rolls stuffed with creamy coconut custard and drizzled with sweetened condensed milk and coconut shavings.  Um, YES, PLEASE!  I also love anything coconutty, even though coconut sometimes disagrees with me.  TMI, I realize that, but this felt like a risk worth taking, for the sake of journalism. 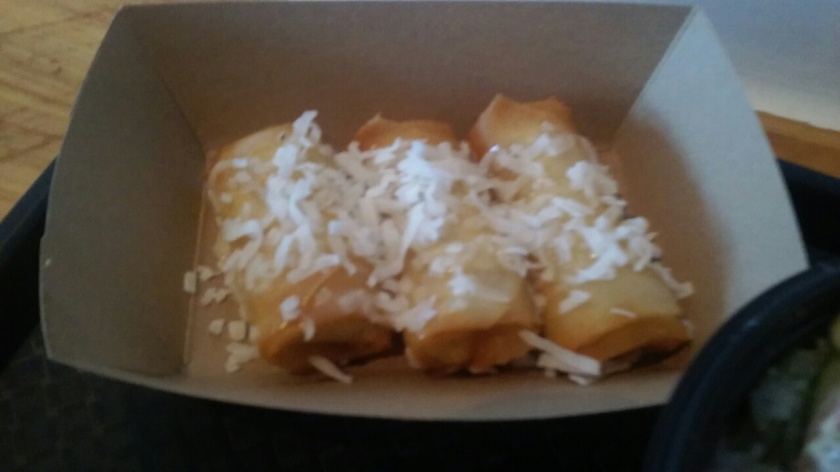 I had no complaints, neither as I ate the delicious haupia pie nor in the hours that followed.  Crispy and soft, crunchy and sticky, and extremely rich and decadent, I definitely recommend it.

When I returned two days later with my wife, she tried Poke Hana’s other dessert called butter mochi, which was also rich and decadent.  It was a square of cake, already sliced and wrapped in plastic wrap, similar to pound cake or sponge cake, but better.  It was also chewier, perhaps due to the presence of glutinous rice paste, also known as mochi.  We both liked it a lot.

I don’t mind saying that I could eat a poke bowl and a side of macaroni salad at Poke Hana every day and never tire of it.  I don’t think I could give higher praise than that.  I wish them the best of luck, and I hope they last forever in this location.  I’m definitely going to become a regular here!