Okay, it has been far too long.  I had a big work project to complete in September, with my continued employment and entire career at stake, but I got that done.  I promise I’ll never leave you again!

This morning my wife and I returned to one of our favorite new discoveries of 2018, Pizza Bruno, a small, hip restaurant out on Curry Ford Road.  (http://www.pizzabrunofl.com/)  I have been a fan of the chef/owner, Bruno Zacchini, for years — ever since he used to set up a food cart, Big Bruno’s Bites, in front of the old Redlight Redlight bar on Bennett and Colonial, where one of my other favorite newer restaurants, Blue Jacket Grille (see my review here), is now.  After a stint as chef at the lost and lamented Oblivion Taproom on Colonial, Chef Bruno opened his own pizzeria, and it is one of Orlando’s best.

In addition to dinner, they open at 11 AM on weekends to serve their regular menu plus some brunch specialties, and starting TOMORROW, October 8th, they will start serving LUNCH!  That will be a game changer for me, since Pizza Bruno is a lot closer to work than it is to home.  I can’t wait.

But today, my wife and I treated ourselves.  We arrived shortly after they opened at 11 AM, and we HAD to order the garlic knots, which are the absolute best garlic knots ever.  With all the work stress I’ve been dealing with over the last two months, I’ve been craving garlic bread constantly, as a comfort food.  I won’t tell you how many frozen loaves of garlic bread I’ve baked at home, or how many of them have been disappointing and made me feel a lot worse about myself afterwards.  (Spoiler alert: almost all of them.)

Bruno’s “Too Much Garlic” knots are on a whole other level.  They’re not soaked through with oil, but they are the absolute perfect consistency — appropriately soft, with the slightest crispy exterior.  The garlic topping needs to be bottled and sold in supermarkets, and the cup of marinara sauce is an underrated complement.  A word of warning to the Saboscrivner Squad: Pizza Bruno often runs out of garlic knots in the evening, so if you go, go early so you don’t run the risk of missing out one of Orlando’s finest carbs.

As if that wasn’t enough, the brunch menu offered us a new option: the best knots in town, sans garlic, but covered with sticky cinnamon-sugar glaze and served with a thick, rich mascarpone cheese spread infused with orange.  Kind of like cinnamon rolls, only far better than Cinnabon.  Of course my wife and I accepted the challenge to compare these cinnamon-sugar knots to our favorite garlic knots.  Needless to say, they were great, and the citrusy mascarpone amazed and astonished.

Believe it or not, I eat salads quite often at home, and I pack them in my work lunches quite frequently.  But my wife NEVER wants a salad when I offer to make her one.  Who here knows the Steely Dan song “FM (No Static At All),” in which Donald Fagen sings “No static at all”?  Well, we sing “No salad at all” to the same tune, knowing that she will never ask me for one.  But at Pizza Bruno, they serve a kale salad she absolutely loves, with golden raisins, candied pecans, pecorino romano cheese, and emperor dressing (their version of Caesar dressing), so she got another one of those today.  I’m not the biggest kale fan in the world, but it’s a very good salad.  It just comes in a tiny wooden bowl despite being quite large, so some spillage is unavoidable.

Bruno’s pizzas are twelve inches in diameter, cut into six slices, and are a relatively thin-crust, Neapolitan style.  They aren’t as crispy or large as New York-style pizzas, but the crust is much softer than you’d get at a place like Anthony’s Coal Fired Pizza, which is served with burnt spots.  In the past, I’ve ordered the New Haven-style clam pizza, but they didn’t have it as an option today due to a clam shortage.  This is a picture of the clam pizza from a previous visit: 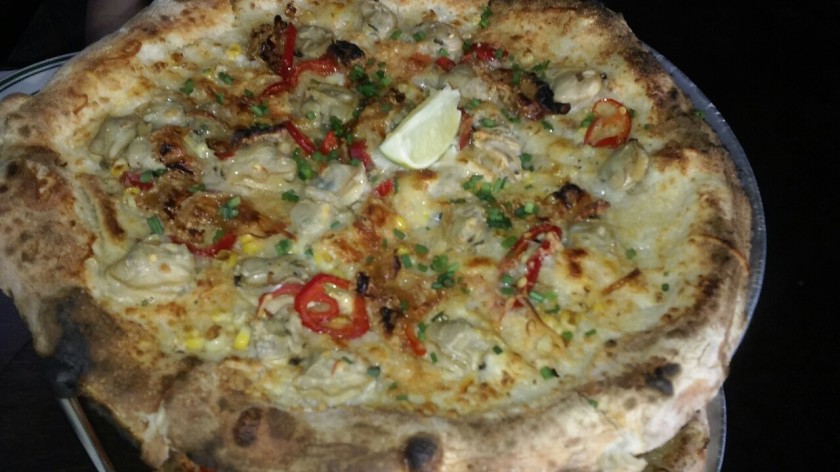 Today I got the “Tight Socks” pizza, with red sauce, mozzarella, good quality pepperoni, emperor dressing (very subtle), and fresh Thai basil leaves on top.  It was great, as always.

My wife ordered a newer pizza off the brunch menu, although it is apparently available for dinner as well.  The G&B is a white pizza (which is great for my wife, who doesn’t love tomato-based sauces the way I do), with fresh mozzarella,  guanciale (one of my favorite cured meats, made from the jowl of a pig, then fried up crispy like very posh bacon), blueberries, and a drizzle of real maple syrup across the top.  It might sound like a desserty thing, but it is much more savory than sweet due to the rich, crunchy saltiness of the guanciale and the tartness of the juicy blueberries.  She loved it.  I had a piece too, and it was terrific.

As you might expect, we ended up with a lot of leftovers, which is totally fine with us.  I cannot recommend Pizza Bruno highly enough.  As much as New York-style and Sicilian-style pizzas are close to my heart, since that’s what I grew up eating in Miami with my Brooklyn-raised dad, I don’t think it’s a controversial statement to call Pizza Bruno the best pizzeria in Orlando, with its creative Neapolitan-style pies, incredible knots, and wonderful service.  I would be remiss if I didn’t give a shout-out to our server Frankie, who was a delight — enthusiastic, knowledgeable, friendly, patient, and an overall good time.  Thank you, Frankie, for making our day! 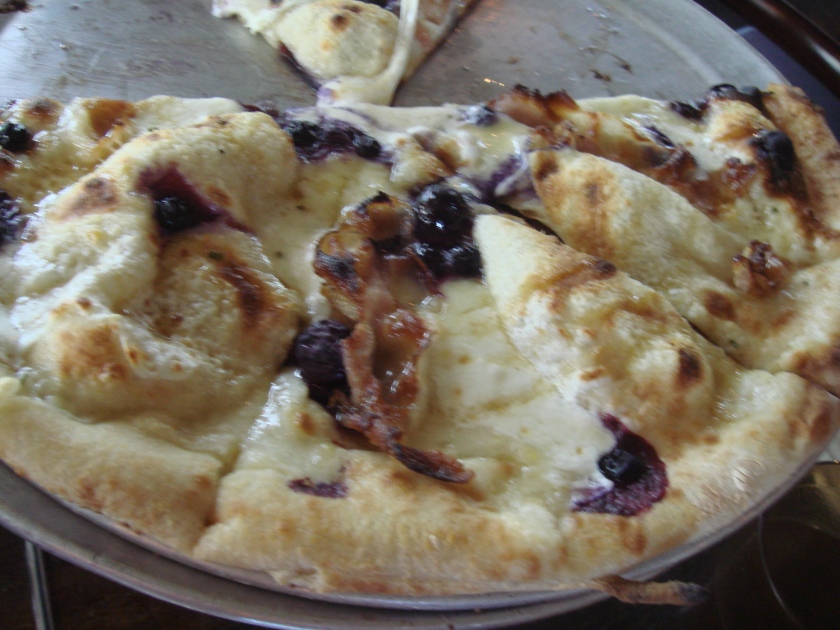