UPDATE 10/24/2022: Something Fishy closed its Apopka location in October 2022, but its newer location in Altamonte Springs still exists, and is still terrific.

This past weekend, I brought home takeout from another excellent Black-owned restaurant that I want more people to know about: Something Fishy (https://www.somethingfishyapopka.com/), located in Apopka, just west of Altamonte Springs on Semoran Boulevard.  I hardly ever make it that far west, but now I have a reason to!  Something Fishy is a casual seafood restaurant that is the very definition of a family business, opened by husband and wife Terence and Patrice Phillips two years ago.  This is their first restaurant, and they both had other careers before, but one of their sons graduated from culinary school and has helped guide them, their daughter is a graphic designer who designed their logo and flyers, and their youngest son works at the Menchie’s Frozen Yogurt location next door that the Phillipses also own.

Terence, who is also the chef, took my order over the phone, and I got to meet him and Patrice when I showed up to pick up our lunch order.  They were really nice — warm, welcoming, and wearing masks — and I knew immediately that the food was going to be great.

I’ve joked before that my wife and I are on seafood diets: if we see food, we eat it… as long as it’s seafood.  Longtime Orlando residents know our local seafood options are scant and slim, especially for more casual, non-bank-breaking choices, so I’m thrilled to report that Something Fishy will satisfy your cravings, especially if you may already be a fan of places like Boston’s Fish House.  Now, I’ve been going to Boston’s since I first met my wife and her parents in 2006, but everything she and I tried today was a different style of seafood, maybe more Southern and less New Englandy.  There’s no point in trying to rank them, but I do think Something Fishy has bolder flavors. I encourage you to try it for yourselves, ideally as soon as possible.

“When marimba rhythms start to play,
Dance with me, make me swai”

My wife has lived in the Orlando area since she was three, which I guess makes her a Southern gal, at least geographically.  She loves catfish and grits, so she perked up when she saw fish and grits (together at last!) on the menu.  She asked me to order her the fried swai (Asian catfish) and grits ($9.99), but you can also choose tilapia, Atlantic cod, salmon, unicorn fish (AKA naso; a new one to us), or a fresh catch of the day.  It’s nice to have options, but she wanted swai!  The fish came in two thin fillets, fried in a light and crispy batter that looked cornmeal-based, and she devoured them with gusto.  It was a different style from the catfish she enjoyed from Nikki’s Place last weekend, but she was super-enthusiastic about both. 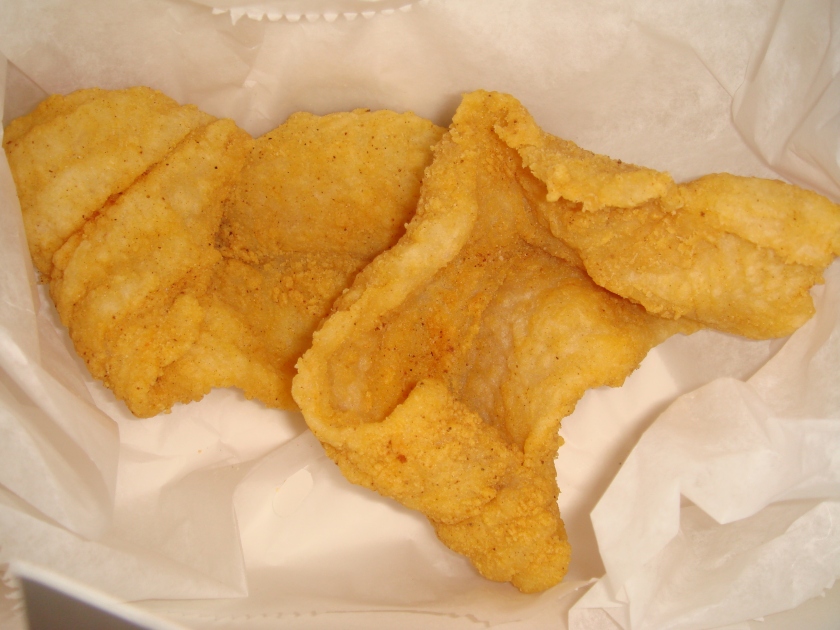 She just wanted butter on her grits, which came in a separate container (one of those good plastic reusable containers that are dishwasher- and microwave-safe), but you can also get green onions and cheese on them, in addition to the butter.  Not being the biggest grit guy, I asked if these grits were better than our beloved Waffle House, and she said yes.  I’m guessing Something Fishy serves real grits, because as we all learned from My Cousin Vinny, “No self-respecting Southerner serves instant grits!”

I was torn between multiple options, but narrowed it down to two and decided to get both, figuring she would want to try them anyway.  I got an appetizer order of fried oysters for myself ($8.99), because I always love oysters in any form, whether they’re raw on the half-shell, battered and fried, or pretty much anything else.  These twelve oysters had a completely different breading than the swai fish, darker and crispier, with savory seasoning — a little peppery.  They came with a small dipping cup of creamy, tangy remoulade sauce that I would love to be able to spread on anything or dip anything into, from roast beef sandwiches to potato chips to falafel, from fried chicken to grilled vegetables to roasted corn.  My wife also liked the fried oysters, since we share everything here.

My other choice was the lobster roll, which is listed as “market price” on the menu, but today that came out to $16.99.  We always love lobster rolls, and it’s rare to find such a hearty and delicious sandwich that also manages to be refreshing, rather than heavy.  This was a different kind of lobster roll.  Instead of the rich lobster meat being served chilled in mayonnaise, this one was served warm, after being sauteed in butter with the most delicious sauteed, seasoned cabbage.  We chose wisely.  It was a beautiful sandwich, and after I cut it in half for us to share, it was a big hit.  My wife always “deconstructs” her sandwiches (just like a professor to do that!) and usually gives me her bread or roll, but this soft bun was so soaked through with butter and the lobster juices and seasoning that she even wanted that.

The sandwich came with one side, and since my wife had her grits, I asked Chef Terence if they happened to serve onion rings, even though they weren’t on the website menu.  I was pleasantly surprised that he said they did, so I asked for those, and now this is a

special review.  These were excellent onion rings, not too greasy, not dark and burned to a crisp, not falling apart, fried to golden brown in what I always default to calling the “good kind” of batter.  And once again, this was a completely different batter than the swai fish and the fried oysters, so their batter game is strong at Something Fishy.  I dipped some of them in the remaining remoulade sauce that came with the fried oysters, and had ketchup on hand for the rest.

Something Fishy was a great catch in Apopka, which rarely shows up on Orlando foodies’ radar as a hot hub of gustatory goodness.  But it’s worth the 10-15 minute drive west when you get off I-4 on exit 92 in Altamonte.  Terence and Patrice were kind hosts who run a tight ship, and they definitely aren’t shellfish with the portions.  It’s a brightly-lit space with plenty of seating, for those brave enough to dine in restaurants these days.  It’s not a dive; you and your grouper won’t feel packed in like sardines.  Everything we ordered was reely good, so if you like what you’re herring, stop floundering.  Mullet over and swim by Something Fishy some time, just for the halibut.  It’ll have you exclaiming “Oh my cod, it’s so good!”