There is one local foodie friend of mine, a fellow educator and fellow lover of hip hop, who I always agree with on all gustatory matters.  We haven’t met in real life yet, but she’s definitely one of my BFFs — my Best Food Friends.  Whenever she posts about trying anything new and liking it, I always pay attention, because I know it is going to be awesome.  Follow her Instagram as @Fork07, and just like I never try to steer my readers wrong, she won’t either.

One of her latest discoveries became one of mine as well: Chicken Fire (https://www.facebook.com/eatchickenfire/), a new food truck specializing in Nashville-style hot chicken, that is currently all the rage.  I’ve been obsessed with it ever since trying it at the legendary Hattie B’s in Nashville in 2018, and I was thrilled to discover that Swine & Sons makes an outstanding SMOKED hot chicken sandwich, right here in Winter Park.  I gave them a glowing review a few months ago.

Well, Chicken Fire is the new Nashville hot chicken contender, and I can assure you that the chicken is straight fire.  It tastes closer to Nashville standard Hattie B’s than Swine & Sons’ smoked hot chicken.  Don’t get me wrong, both are great, but if you’re craving that one-of-a-kind Nashville burn, do I have the truck for you.

Chef Kwame Boakye serves up chicken tenders at four strengths: Soulful (seasoned like regular fried chicken, but not spicy at all), Mild, Medium, and Hot. 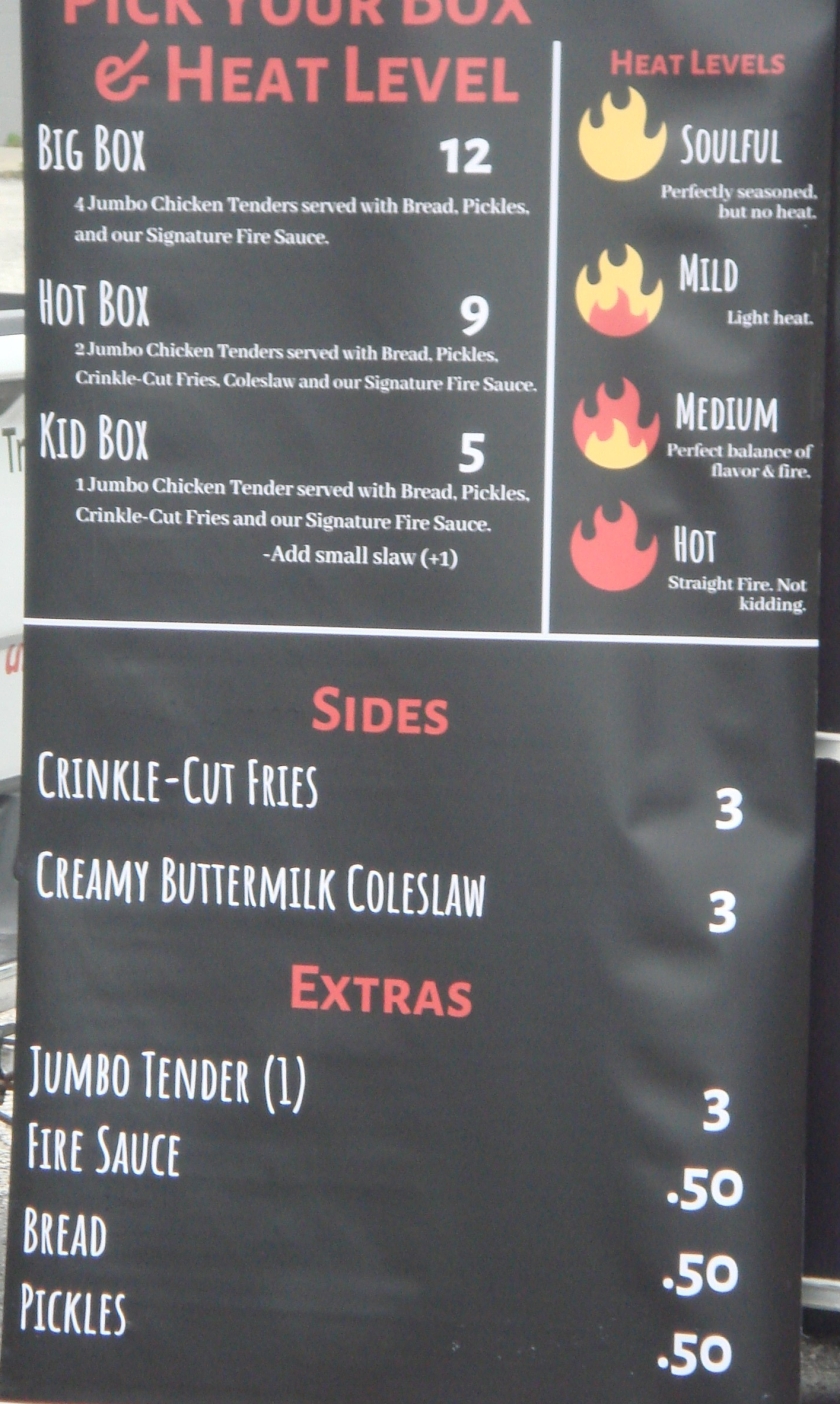 On the recent Sunday morning I caught the Chicken Fire truck at the East End Market in Orlando’s Audubon Park neighborhood, I arrived almost 45 minutes before he opened and ended up being the sixth person in what became a very long line, wrapping around the whole front of the East End Market building.  Chef Kwame was outside his eye-catching food truck, taking orders by hand and warmly greeting every customer with a handshake and a welcome.  I had already messaged him on Facebook to ask for his whereabouts, so I was exciting to meet The Man.  He could not have been warmer or friendlier.

I ordered a Big Box ($12) that comes with four tenders, a little container of Fire sauce (a creamy, tangy sauce that goes great with any flavor of chicken tender, similar to Hattie B’s “comeback sauce,” with more flavor going on than Alabama-style white barbecue sauce), and two slices of white bread underneath — a necessary and welcome addition for helping to cut the heat.  I asked Kwame if I could get one tender of each flavor: Soulful, Mild, Medium, and Hot.  He said he doesn’t usually do that, but he would make it happen for me.  I was grateful, because I was really looking forward to trying each one to share my thoughts.

It didn’t take long for my order to come up, and since it was crowded at the East End Market as well as being a cool, drizzly morning, I drove straight home to share my spoils with my wife.  I figured the non-spicy Soulful tender had her name on it, since she doesn’t eat a lot and avoids anything spicy.  (Hattie B’s in Nashville does something similar, with their “Southern” tender as the completely non-spicy one, even below Mild.)

Luckily, there was plenty of food for me.  These are huge white meat chicken tenders, juicy and moist and fried to crispy perfection.  But they are not for the faint of heart!  The Mild would easily be a medium at most other places, the Medium was hot enough to make my eyes water, and the Hot, in its deep, dark, intimidating red color… WOOOOOOOOO!  (Imagine more of a Ric Flair “WOOOOO!” than a Will Smith “WOO!”, and you’ll have the right idea.)  Powerful stuff.

Those slices of white bread under the tenders (from the excellent Olde Hearth Bread Company in East End Market, which provides bread and baked goods to many local restaurants) was a real lifesaver in putting out the fire on my tongue, but it could only do so much.  I was also relieved to have cold milk at home, since water would not have done much to abate the burning.

I hate the song, but these hurt so good.

I also paid $3 for an order of Kwame’s excellent, cool, creamy, crunchy cole slaw, another heat-cutter, and 50 cents for an extra container of Fire sauce, since the one that came with the Big Box wasn’t nearly enough.  If he sold Fire sauce in bottles, especially convenient squeeze bottles, I would totally buy one for myself and others to give as gifts.  “Merry Christmas!  Have some Fire sauce!”  Too bad I can’t mail these hot chicken tenders, or I’d consider doing that too.  I have friends in other cities who would love them, even in Nashville, ground zero for legendary hot chicken.

Be on the lookout for Chef Kwame popping up with his Chicken Fire truck around Orlando during what remains of November and throughout December.  Check his Facebook page for dates and times so you catch him, but it looks like he’ll be at Whippoorwill Beer House & Package Store on Friday evenings, Redlight Redlight in Audubon Park on Saturday evenings, and if you’re very lucky, you might also catch him at East End Market another Sunday during the day.

But best of all, starting in January, Chicken Fire will become one of the regular food trucks featured at Orlando’s centrally-located A La Cart food truck park.  2020 is going to be the year hot chicken reigns supreme in our City Beautiful, between Swine & Sons’ spicy, smokin’ sandwich and Chicken Fire’s tangy, tantalizing tenders.  Wherever that truck goes, I will follow… with plenty of bread and milk!