EDITOR’S NOTE: Mason Jar Provisions closed during the summer of 2022.

Mason Jar Provisions (https://www.masonjarprovisionsorlando.com/) is a brand-new Southern restaurant that just opened in the space recently vacated by Big Time Street Food, which I reviewed earlier this year after my one and only visit (before a KRS-One concert, which was one of the last fun things I did pre-pandemic).  Located in the Thornton Park neighborhood near downtown Orlando, it’s a very small space with a few seats at a counter, but the restaurant is attached to Burton’s Bar next door (and now owned by the same people).  Diners can take their food through a doorway over to Burton’s and walk back and forth between the establishments.  By the time people read this, their hours will be 12 noon to 10 PM.

Before continuing my review, you have to check out this menu.  Everything looked so delicious and tempting, I had a hard time choosing between six or seven different things.  I had to go back to edit this review after first publishing it because I belatedly learned Mason Jar Provisions is co-owned by chef A.J. Haines, who used to cook at one of our favorite, long-gone, much-missed Italian restaurants, Wolfie’s PizzaMia, and he used to work magic and miracles in that kitchen.  Burton’s General Manager Jeff Darnell is the other co-owner.  But because Thornton Park is pretty far from us and parking is difficult around there, I called in a pretty big order on a weekday afternoon I had off, and was lucky enough to be able to park right in front to pick it up.  That probably would not have happened in the evening or on a weekend.

My wife likes her food relatively plain and unadorned, without any condiments or sauces.  So I ordered her the regular beef burger ($9) with its lettuce, tomato, onion, pickles, and ketchup on the side.  It’s the kind of burger that is smashed flat on the griddle, cooked to medium well.  It was served on a lightly-griddled brioche bun with a huge order of seasoned fries.

You may have also noticed two huge chicken tenders, which I also ordered for her, because she was intrigued by both.  She doesn’t eat a lot, so we both figured she’d probably get three or four meals out of the big burger and the tenders (which actually come in an order of three for $9).  She thought the burger was a perfectly okay burger, but LOVED the tenders.  These were mild, but they also come in medium, hot, inferno, blackstrap (molasses) barbecue, or dry rub flavors.  We were given a choice of a cup of ranch or blue cheese (she never wants either, so I chose blue cheese for myself), and they also came with a cup of buffalo sauce and four celery sticks.

I had been reading hype and praise for the titular Mason Jar burger ($13), so that’s what I had to get… well, one of the things I had to get.  It contained TWO beef patties, tasso ham (such a nice alternative to bacon!), creamy and tangy remoulade sauce, melty American cheese (longtime Saboscrivnerinos know it’s one of my favorite cheeses to put on a burger), plus the usual lettuce, tomato, red onion and pickles.  I like pickles now, so these were all welcome toppings for me. 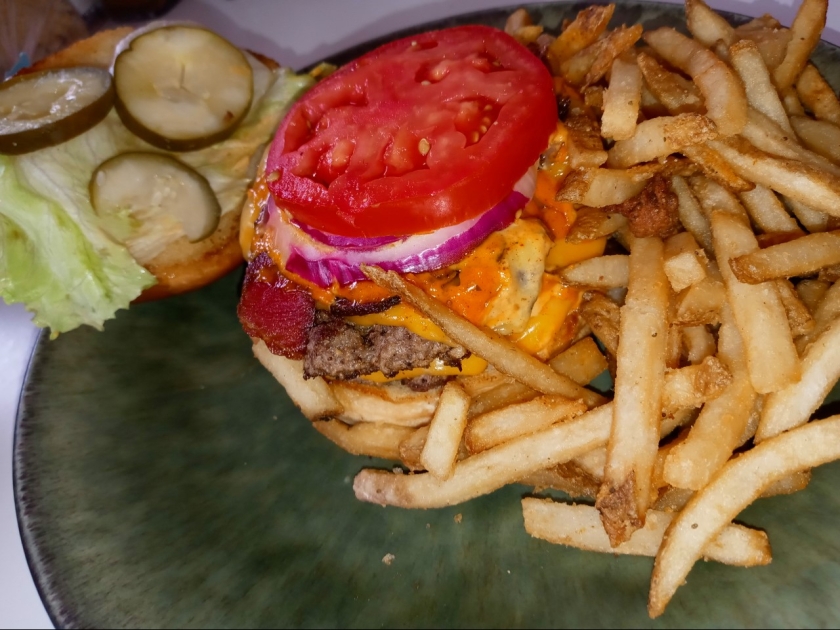 The burger was juicy and flavorful, despite my initial skepticism about it being cooked to medium well, the grilled brioche bun was rich and perfect, and everything held together for an intoxicating melange of flavors, colors, and textures without threatening to slip and slide apart as I enjoyed it at home.  And despite the schlep back to the Casselberry suburbs, the fries were still warm by the time I got home!

Maybe the most curious thing on the menu was the collard melt sandwich ($12), featuring braised collard greens, house-made smoked pimento cheese, chow chow (a Southern cabbage-based relish that is sometimes sweet, sometimes spicy, but always tangy), and balsamic reduction, all on grilled sourdough bread.  These are all flavors I love that I never thought of combining into a sandwich, so I’m glad someone more creative than I did.  It came with even more fries.

I didn’t even eat this until the following day, after warming it up in the toaster oven.  It was a winner.  I seriously love collards, pimento cheese, anything cabbagey, and anything smoky, so it was a killer-diller, no-filler, thriller goriller of a sandwich for me.  Vegetarians, rejoice!  As long as you allow yourself to experience the joy of cheese, here’s a new sandwich every vegetarian in Orlando should seek out.

If it seems like I brought home a lot of food, I did.  I wanted to order a few different things because I was trying a new place, because it’s hard to get over to Thornton Park, and because I wanted to give myself a break from cooking and avoid even being tempted to leave the house again for the next few days.  And with all of this in mind, I also ordered the hot chicken sandwich.  (My parents must be so proud.)  I’ve been very obsessed with hot chicken ever since eating at the legendary Hattie B’s in Nashville in 2017, and I’m thrilled that Orlando has so many wonderful hot chicken options now, including Swine & Sons (a smoked thigh sandwich), Chicken Fire (tenders in or out of a sandwich), and Git-N-Messy BBQ (not covered in my review, but his hot half chicken may rule them all).

Mason Jar Provisions’ menu says their hot chicken sandwich ($13) says it’s a smoked, breaded, and deep-fried chicken thigh served with hot sauce, bread and butter pickle slices, and cole slaw, served on a grilled brioche bun with even more fries on the side.

As you can see, the sandwich included two smaller breaded thighs, but it wasn’t dripping in the intense oily, spicy seasoning of Nashville hot chicken like the aforementioned restaurants.  It was incredibly tender and juicy meat, but it wasn’t really hot either.  Like a couple of kids, I traded my wife the not-really-hot thighs from the sandwich for her burger patty — each missing a bite, so it was a very fair trade.   They were thoughtful enough to pack the cole slaw in a separate cup with a lid, to avoid creating a mess that would have ruined the crispiness of the chicken and soaked through the bun and fries on my way home.

As much as I enjoyed my Mason Jar burger and the collard melt sandwich and would probably order them again in the future, I probably wouldn’t get the chicken sandwich again.  Not when they offer a braised barbecue short rib hoagie with pickled onions and pickles (the Dave Dog).  Why didn’t I get that instead?  However, my wife gives the chicken tenders her Saboscrivner Spouse Seal of Approval, and she knows tenders because she is the most tender person there is!

Folks, it’s an unknowable, scary, and outright dangerous time right now.  The restaurant business was hard enough already before COVID-19 pandemic struck, and we’ve seen too many beloved local eateries struggling and shuttering over the last few months.  I can’t even imagine what it feels like to be opening up now, in late June, as infection rates are increasing almost exponentially here in Orlando.  But we still have to eat, and restaurants are still considered essential businesses that are staying open to serve the rest of us.  Most people are going to venture out of their bunkers for takeout food eventually.  I implore you all to choose wisely and eat locally when you do, to support local restaurants that rely on your business and will appreciate your business.  So consider paying a visit to Mason Jar Provisions, one of Orlando’s newest restaurants, for some Southern comfort food at a time when we can all use some comfort in our lives.  Check out these drool-worthy photos and treat yourselves to something tasty and satisfying.  It might just be the highlight of your week, as it was of mine.