I just recently learned about the existence of Itamae Densho (https://itamae-densho.square.site/), a Japanese restaurant affiliated with local favorite (and Saboscrivner favorite) Swine & Sons inside The Local Butcher & Market, a gourmet butcher shop and market in Winter Park.  Local chef Denni Cha set up there a week ago, creating beautiful donburi, bowls of sushi-seasoned rice topped with stunningly gorgeous arrays of raw fish, fresh and pickled vegetables, actual flowers, and so much more.  I’m a huge fan of poke and sushi, but I’m used to very casual build-your-own poke bowl places, and I’ve never done a full-on omakase dinner experience.  So even though these donburi look almost too pretty to eat, I wanted to destroy something beautiful.

I placed my online order on the above website late last night and paid in advance with my credit card.  The automated e-mail told me my order would be ready after 5:50 PM today, and since I grew up in a home where “Early is on time and on time is late,” I was there right on the dot.  I met Denni, who said they would just need some time to assemble everything so it would be at its freshest, and I appreciated that he didn’t have it already made, sitting there waiting for me.  I was out the door with three bowls packed in recyclable, dishwasher-safe, microwave-safe containers in about ten minutes.

This is the Salmon Oyako donburi ($16) that my wife ate most of.  The website describes it as including “Wild King Salmon Tataki, House Cured Salmon Roe, fresh and pickled veggies, served over sushi rice.”

Note the little yellow flowers and the beautiful green romanesco cauliflower, which has fascinating fractal patterns.  It looks like sci-fi food, and I always remember Rey actually eating some in Star Wars Episode VII: The Force Awakens.  The salmon roe popped lightly in our mouths like delicate, salty, fishy bubbles, and the salmon was incredibly fresh.

I love tuna, so I was in tuna heaven with this one.  I also liked the seaweed salad, which had a nice crunch and a subtle saltiness from soy sauce.  The leafy green surrounding the roe in the above photo had an interesting bitter taste.  But those thin slices of pepper are serrano peppers with the seeds and ribs intact, so they are no joke.  I’m used to jalapeños, which are further down the Scoville scale, heat-wise.  Plus, I usually remove the seeds and ribs when I prepare jalapeños at home, always while wearing disposable gloves (a lesson learned the hard way, after one horrific incident I won’t go into in this space, in mixed company).  Anyway, before too long, we were like a couple of kids: her picking out the serrano slices for me, and me picking the tiny flowers off with my chopsticks for her.  (I don’t think they added much in the way of flavor, but damn, were they cute!) 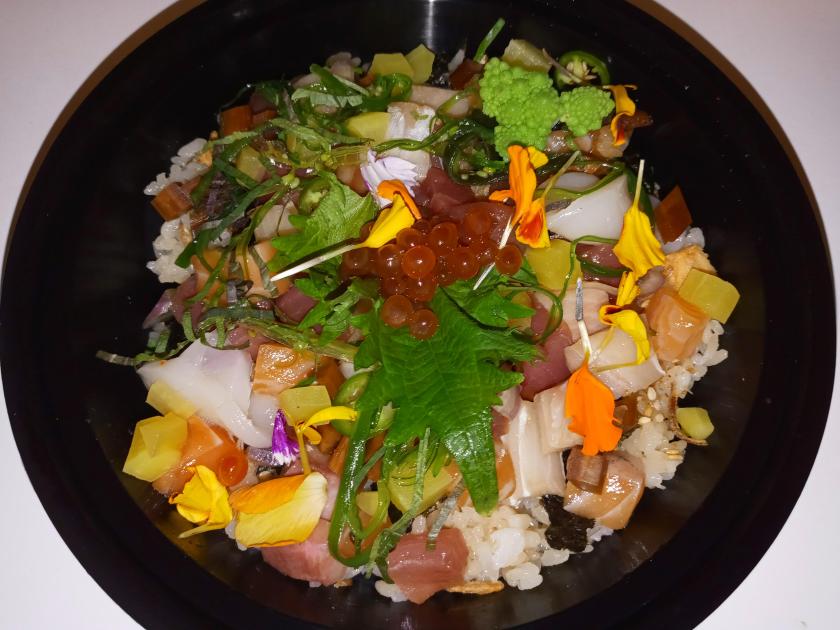 Aside from tuna, salmon, and the roe, I think I recognized hamachi (yellowtail) in this bowl, plus more of the other ingredients.  The sushi rice was excellent, and even my wife, who normally doesn’t like the sweet rice vinegar flavor in sushi rice, enjoyed it.  My wife was the first one to discover that all three bowls had crispy fried onions near the bottom, underneath the rice.  She doesn’t normally like onions at all, but she enjoyed what these brought to the table.  As for me, I love onions, so I was very content.

I’m sure there is a grand tradition of this beautiful presentation in Japanese cuisine, but we usually don’t go to those high-end sushi restaurants.  However, my wife and I were both reminded of the award-winning restaurant Noma, in Copenhagen, Denmark.  No, we’ve never been there either, but it has been featured in many food and travel shows, including the late, great Anthony Bourdain’s Parts Unknown and No Reservations, David Chang’s Ugly Delicious, and Phil Rosenthal’s Somebody Feed Phil.  Those are all awesome shows that any Saboscrivner reader would love, if you don’t already.  Noma’s chef, René Redzepi, prepares these picturesque plates of fancy food that look like tiny terrariums, or dioramas for fairies and elves to live in.  He uses lots of edible flowers and plants to build a little scene, and that’s what Denni Cha’s lovely donburi bowls made us think of.  As long as he’s set up at The Local Butcher & Market, preparing these dishes on Tuesdays, Wednesdays, Saturdays, and Sundays, I encourage all of you to place some preorders on his website.  But do it early, because I have a feeling he may only make so many of these every day, and you don’t want to miss out.