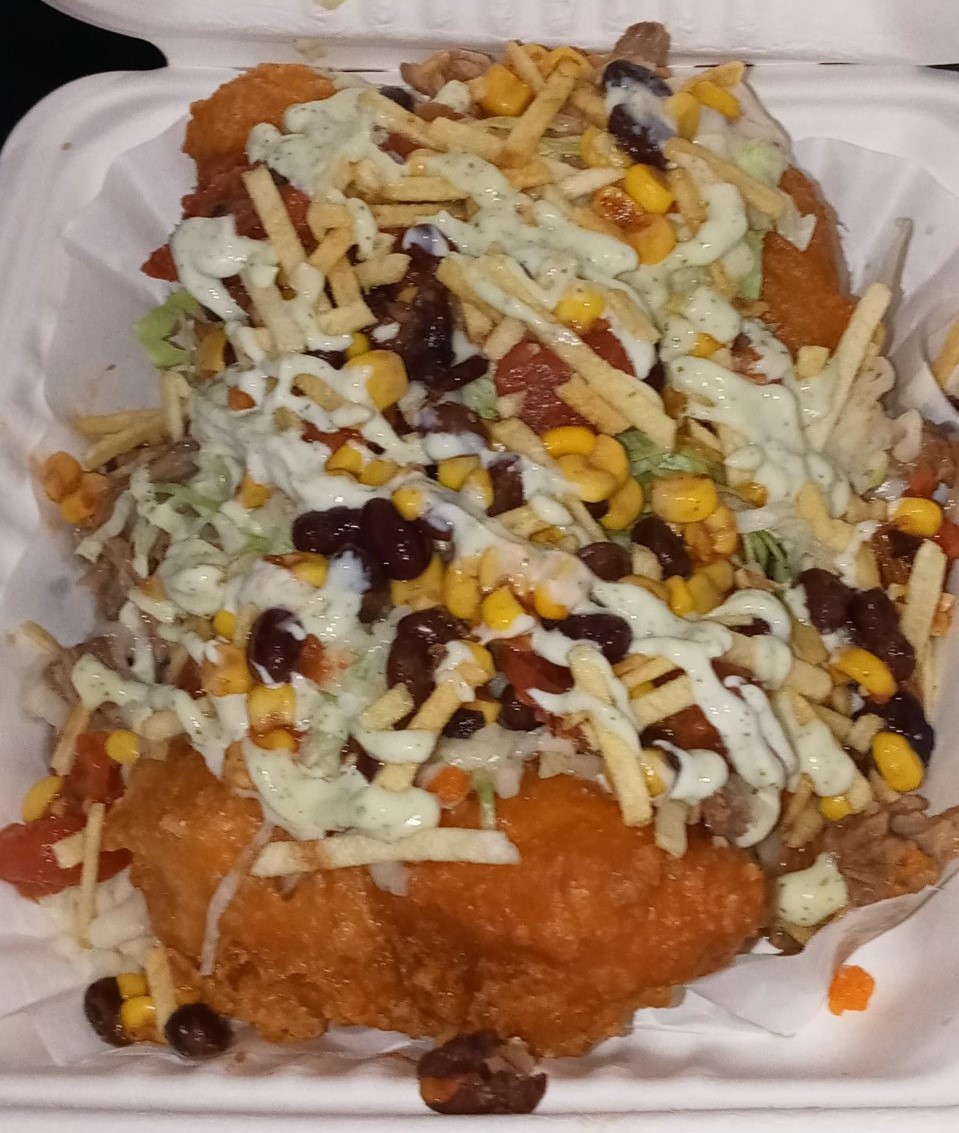 Ever since I was a little kid, I’ve been obsessed with comic books, to the point of making it a serious field of academic study.  Heck, this food blog is even inspired by a comic book series called Chew.  (Check the page heading, in case you’ve never glanced at it before.)  But as much as I love the characters, I focus the most on the creators who write and draw them, and I can always identify their unique, defining styles.  For example, the legendary Jack Kirby (co-creator of most of the Marvel characters you would recognize) specialized in burly, square-jawed heroes and imposing alien technology surrounded by crackling energy.  Jim Lee‘s human figures look like flawless gods and goddesses.  Arthur Adams draws huge monsters and super-cute women, always with extraordinary attention to detail.  Kevin Maguire and Steve Lieber are masters of expressive faces, who can convey so much emotion — and especially humor — with just a look.

Where am I going with this?  Well, as a self-proclaimed food writer, I don’t pretend to be the expert on food that I am on comics, but I feel like I’m at a point where I recognize the signature styles and flourishes of some of the talented chefs who prepare the food I love so much.  I can always identify the best comic creators by their written voices and artwork, whether they work on a mainstream superhero comic, a crime graphic novel for “mature readers,” or a deeply personal, autobiographical, self-published story, and some chefs stand out to me the same way, even when they transcend cuisines.

Orlando is home to some real innovators and creative dynamos who have built a strong culinary culture here, and one of my favorite local chefs is Denni Cha.  He has been cooking since he was nine years old, ever since his grandmother taught him to cook in the kitchen of her Korean restaurant.  I first discovered his food in the summer of 2020, when he ran a Japanese pop-up called Itamae Densho out of The Local Butcher, the Winter Park meat market that also hosts previous Saboscrivner review subject Swine & Sons and Da Kine Poke.  I reviewed the gorgeous, almost otherworldly looking chirashi bowls I brought home from Itamae Densho — maybe the most beautiful things I saw in 2020, an otherwise ugly and stressful year.  They were like little landscapes in a bowl — multiple kinds of fresh fish and vegetables over rice, even adorned with edible flowers and ziggurats of fractal romanesco jutting past gleaming orbs of salmon roe.

Unfortunately, Itamae Densho is no more, but Chef Denni is back with his latest venture, something far removed from chirashi bowls but still totally in character and on brand: Uncle Dendog’s (https://www.instagram.com/uncle.dendogs/), a food truck (really a trailer) that specializes in Korean corn dogs and other street foods with a foreign, fusiony focus.  Follow his Instagram page to see where he’s going to turn up next!

I was the first person to arrive at Uncle Dendog’s this past Friday night, set up outside Orlando Brewing, the brewery and taproom south and west of downtown Orlando.  Not being a drinker, I had never been there before, so I didn’t know how busy it would get later or how the parking situation would be.  But I do prefer to grab my food on the early side, especially since I was bringing it home after work. 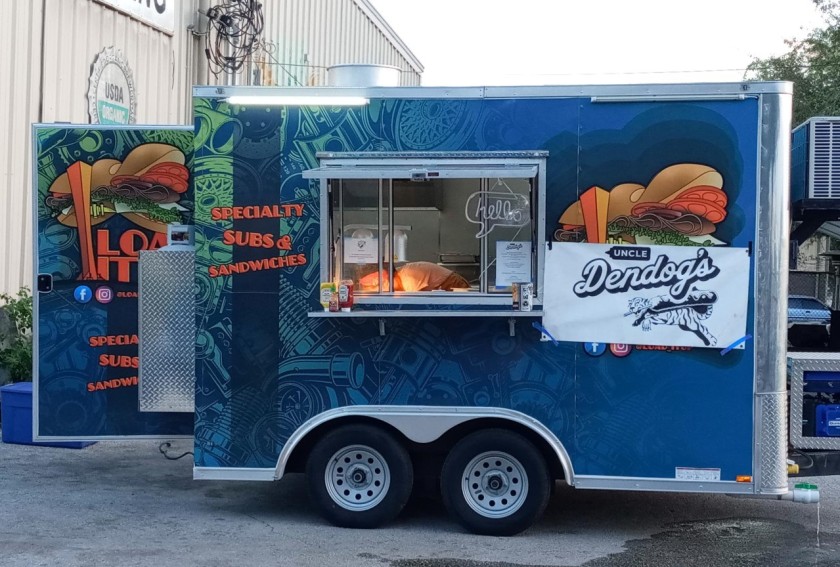 I have taken the liberty of posting photos of the menu, although it may change from week to week or even night to night.  I knew I had to try one of Uncle Dendog’s signature K-Dawgs, so it was just a question of choosing which one.

But I knew he had a new special, just weeks after opening for the first time, and that was what drew me out on this rainy evening.

This was it: “Not-So Native Fry Bread Tacos.”  For many years, I’ve heard and read about Navajo-style tacos, a Southwestern delicacy of meat, cheese, peppers, corn, beans, sauces, and more, served on crispy, pillowy, salty, greasy fry bread, a traditional staple food of Native Americans throughout the American Southwest. 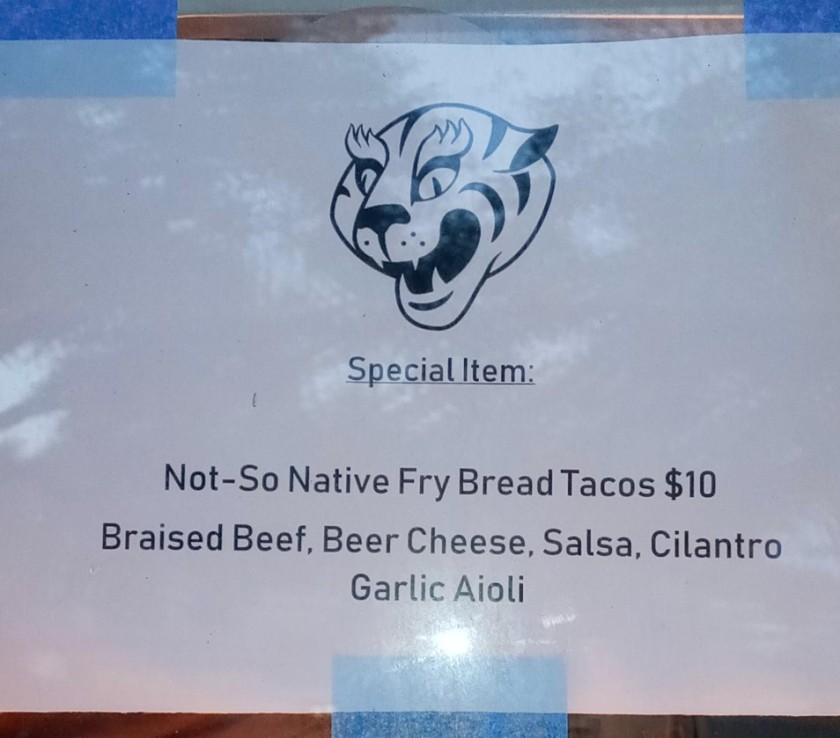 Fry bread may be delicious, but it has a fraught, controversial history in Navajo culture due to the lasting effects of colonialism, when the U.S. government gave the Navajo people flour, sugar, salt, and lard as they were forced to relocate onto desolate, dusty reservations where they could no longer grow traditional, healthy crops like corn, beans, and squash.  There is a schism within the Native American community, and even among Native American chefs, about whether fry bread is an unhealthy, lasting symbol of oppression or a tasty treat born out of resistance and resilience.  It is absolutely not my place to decide or judge which side is right, but I can say a few non-controversial things with certainty, though:
1.) Chef Denni Cha is of Native American (and Korean) descent,
2.) He told me a while back that he planned to offer fry bread tacos as a tribute to his Native American heritage, so I’ve been looking forward to them ever since, and
3.) They were one of the best things I’ve ever eaten.  Yes, in my LIFE.

But first things first: I asked Chef Denni’s lovely wife and partner, Monica, which K-Dawg (Korean corn dog) she recommended, and she told me to go with the Korean in Bogota ($10), a massive meat treat with the lightest, crispiest batter coating a perfect, smoky, salty sausage.  Korean corn dogs are definitely Internet- and Instagram-trendy right now because of how photogenic and eye-catching they are, and this one was no exception.  It was a true fusion: an all-beef Nathan’s hot dog lovingly skewered, dipped in a special batter, and fried until it is crispy outside and lusciously soft inside — an archetypal Korean corn dog even if I had ordered it plain.  But Colombian hot dogs and hamburgers are famous for being served with lots of condiments and toppings, so this was a tribute to those — hence “Korean in Bogota.”  More fusion.  More loving, respectful tribute.  Just like in comic books, this was a legit crossover.

As the menu said, the corn dog is topped with shiso-cilantro garlic aioli, salsa rosada, pineapple salsa, and crunchy potato sticks, and sprinkled with sugar, for a variety of colors, flavors, and textures — salty, crunchy, spicy, creamy, fruity, greasy, soft, cool, sweet, hot.  (When I asked about the sugar, Denni said “Korean Hotdogs usually get heavily dusted in sugar. We do so much else with them that we just lightly sprinkle it.”)  Anyway, I’m glad I took this home and ate it over a table, because it would have been really messy eating standing up at the brewery or in the parking lot outside.

Next up, I brought home an order of lightly breaded wings ($9).  My wife loves wings, but as much as I appreciate sauces and condiments, she isn’t big on them, so I got these plain with her in mind.  The order came with six huge wings in crispy golden-brown batter, and they were really good.  The battered exterior was still crunchy and warm by the time I got home.  I asked, and this batter for the wings is different from the batter he uses for the corn dogs and fry bread.

If you want something a little more exciting than plain wings, the other alternative is to get them tossed in a sweet, sticky kimchi sauce.  When Chef Denni kindly asked if I wanted a little ramekin of the sauce on the side, I said YES, which is what you say if someone asks if you are a god, or if you want some sauce on the side.  That sauce was so good, we poured it over the four and a half wings we hadn’t eaten yet, and it made them even better.  Even after saucing, they stayed crunchy and never got soggy, even after reheating some leftover wings in the toaster oven the next day! 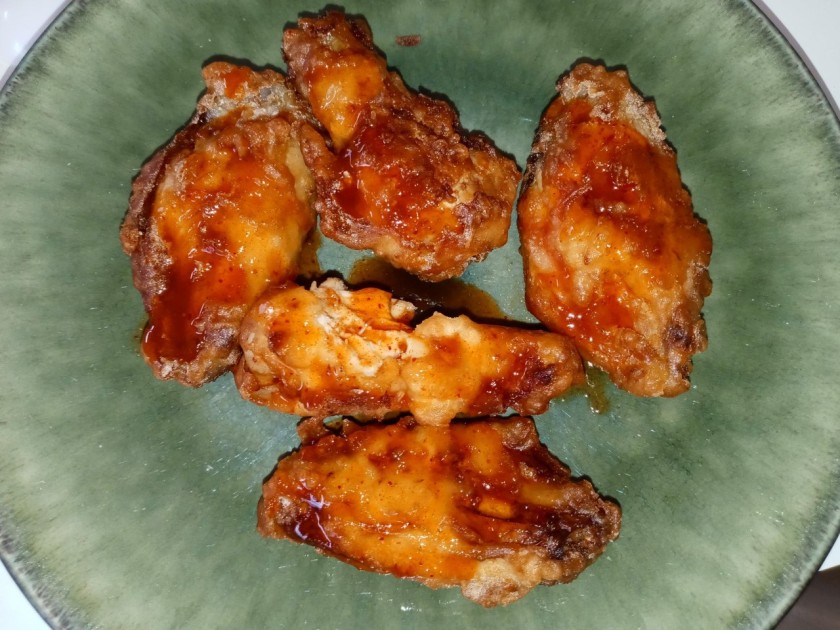 I don’t have a lot of experience eating kimchi, which is weird, because I love pickled vegetables, I’ll eat sauerkraut straight out of the jar or can, and I regularly cook braised cabbage at home.  I need to develop my taste for kimchi, just like I did for pickles.  But this sweet kimchi sauce made these fine wings even finer.

I saved the best for last, which speaks volumes, considering how great the corn dog and the wings were.  I ordered two of the Not-So Native fry bread tacos ($10 each), one for each of us.  They came in the same box and looked like the stuff that dreams are made of.  Topped with braised beef, beer cheese, cilantro-garlic aioli, salsa, corn, black beans, and more potato sticks, they were another amazing, astonishing amalgam of fantastic, fabulous flavors and terrific, tantalizing textures.  But what really took these from tasty street food to next-level works of art was the fry bread itself. 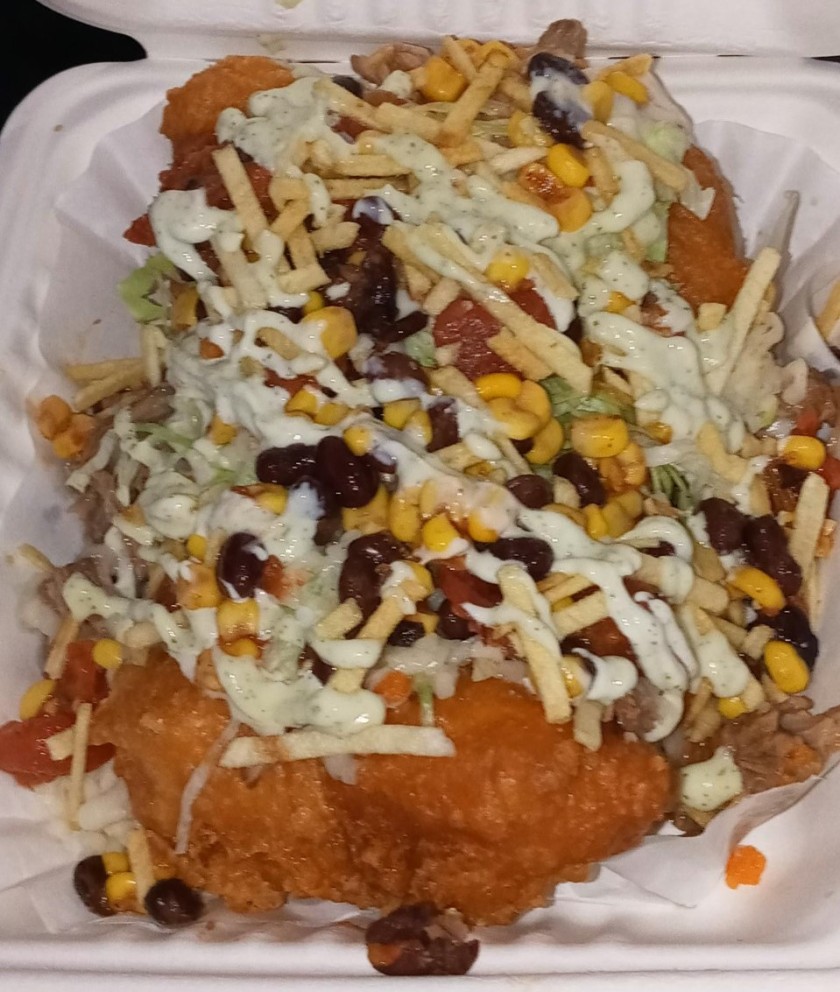 Chef Denni was very forthcoming when I asked him about the fry bread later on.  He uses the same batter he uses for the K-Dawgz (corn dogs), only he lets it proof longer, for a total of 48 hours, to get to the right consistency for his fry bread.  My wife described the texture of being like a really good, really thick “old-fashioned” doughnut (those wrinkly glazed ones, sometimes called sour cream cake doughnuts), only crispy on the outside.  Denni agreed, saying he has compared them to “savory doughnuts” before, but more airy and fluffy.  I swear, you’ve never had tacos like this before, and I’m 100% sure nobody else in Orlando is making these.  The closest thing I could compare them to are sopes, but they are way better than any sopes my wife and I have ever tried.  I can’t imagine anyone not liking these, unless you keep kosher (in which case, ask to hold the warm, gooey beer cheese) or are a vegetarian (in which case, ask to hold the delicious, tender, savory braised beef).  Heck, even going to town on some plain fry bread would be a treat, maybe with some hot honey squirted on it like the best sopapilla ever.  But don’t miss these Not-So Native tacos!

And here’s a mediocre photo of Uncle Dendog himself, Denni Cha, hard at work in the trailer, packing up my takeout order in his panda sushi apron.  He actually took a moment to pose for me, but I said “Thank you!” like a boob before actually taking the picture, so he moved, and this is what I got — totally my fault.  I’m sorry, Chef.

So what does this have to do with the comic book artists?  Well, I told you I’m starting to identify local chefs from their styles, just like the artists I’ve admired for decades.  And after having Chef Denni’s chirashi bowls at Itamae Densho and now his Colombian-inspired Korean corn dogs and Native American fry bread tacos, I think the common element that identifies and unifies his style as a chef is the sheer beauty of it.  His serving dishes are the canvases of an iconoclastic visionary artist, whether they’re bowls with a base of rice or takeout boxes with paper trays inside.  And he builds these mixed-media structures, assembling them from diverse, colorful, fresh, dazzling ingredients that you might not even think belong together, but that’s only because we don’t think like he does.  Especially here in Uncle Dendog’s trailer/studio, he’s creating cross-cultural culinary mashups and remixes — appropriate, because he is also a musician — and elevating humble, familiar street food to eye-catching, awe-inspiring fine art.  You’ll know it when you see it, because you won’t forget it… especially once you taste it.

One thought on “Uncle Dendog’s”