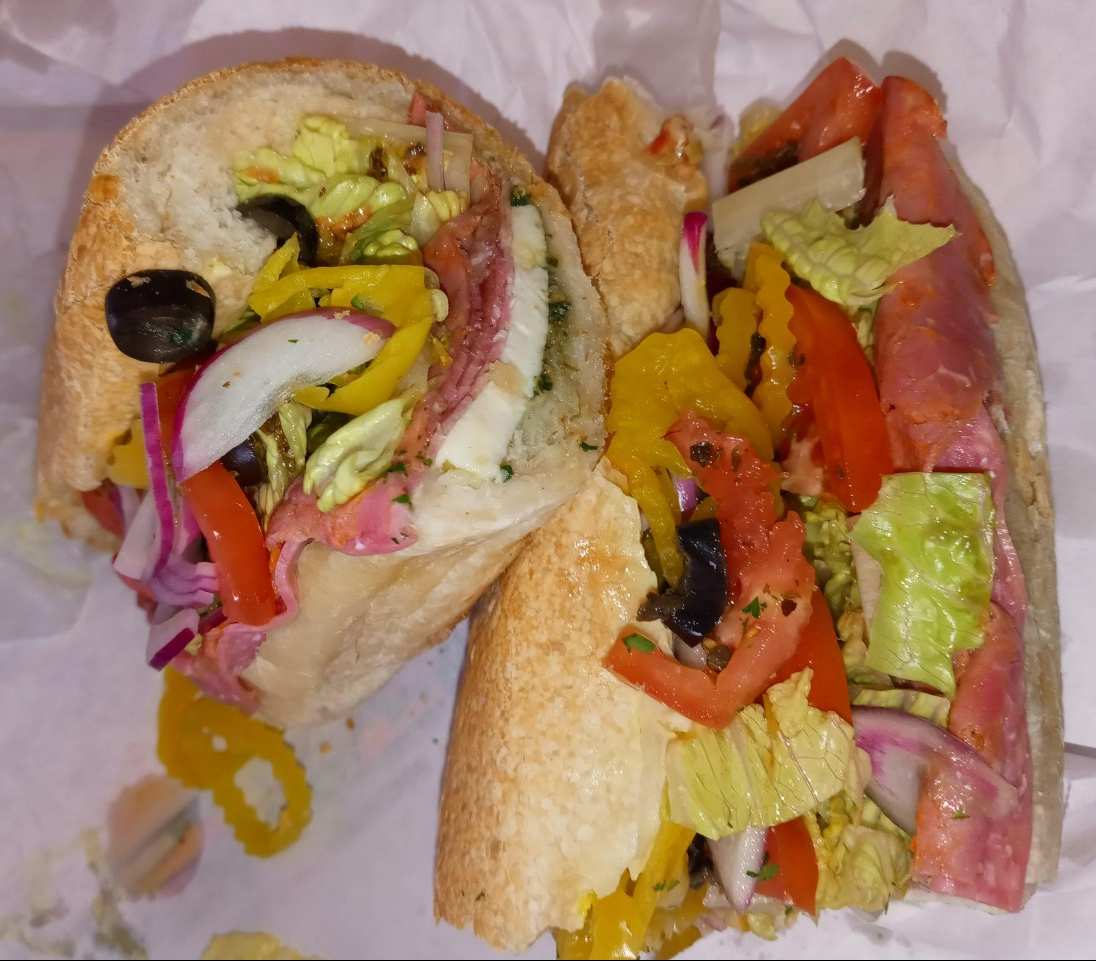 My wife recently said I like pizza more than anyone else she’s ever known.  I’m not sure if that’s accurate, because even though I have strong opinions about what constitutes good pizza (and she and I often disagree on good pizza), I really don’t indulge that often.  I published my last pizzeria review back on March 1st (Tomasino’s!), and I’ve only had pizza three times in almost five months since then (two to be discussed in forthcoming reviews, and the subject of this review).  Now if she had said I like subs more than anyone she’s ever known, I wouldn’t be surprised at all, and I wouldn’t doubt the veracity of the statement either.  I like subs more than anyone I’ve ever known.  Yes, even more than YOU.  Come at me, bro.

So when I kept hearing hype and praise for an Italian restaurant that served great New York-style pizza and a great Italian sub, I paid attention.  Word on the street (by which I mean the Orlando Foodie Forum on Facebook) was that this place makes everything from scratch — their sub rolls, their pasta, even their fresh mozzarella!  It is Tornatore’s Cafe & Pizzeria (https://tornatoresitalianrestaurant.com/), a beloved favorite out in the College Park neighborhood, west of Winter Park and north of downtown Orlando.

I called in a large order, figuring it would be more than enough food to last the two of us a few days.  Tornatore’s was doing very organized curbside pickup, with a table outside where a hostess greeted me.  She brought my credit card inside to charge me, I signed the receipt outside, and they had my food bagged up and ready to go in no time.  They even had a neat little disinfecting device for pens that I had never seen before, that you slide the pen through after each person touches it.  I never even made it inside the restaurant, but I gazed through the glass window into a glass case of house-made desserts (not on the online menu) right in front.  Had I but known, I might have done even more damage!

Anyway, I’ve written before about how pizza is never as good by the time you bring it home, so I ordered a single slice of cheese pizza ($1.95) to consume immediately, in the car, before even leaving Tornatore’s parking lot.  It was New York-style pizza, one of my two favorite kinds (do any sharp-eyed Saboscrivnerinos remember my other favorite kind of pizza?), hot and thin and crispy with gooey, melty cheese.  I’m glad I got the experience of trying a “control” slice the way it was meant to be enjoyed. 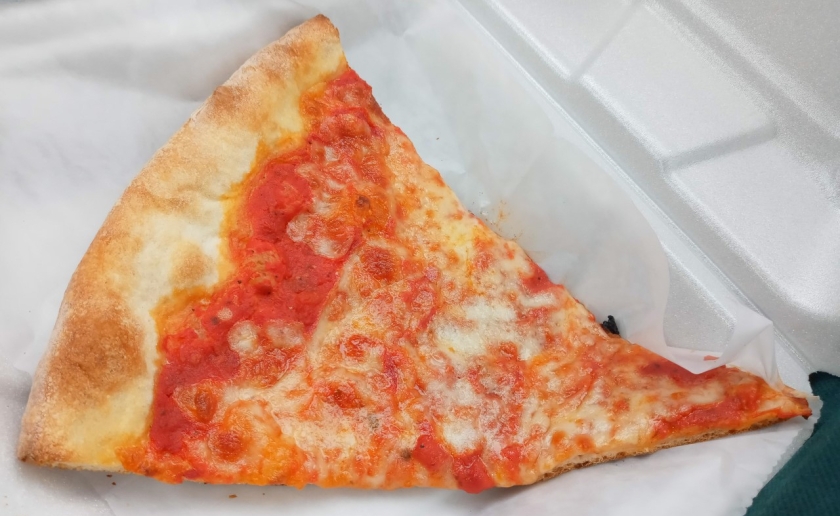 I brought home a 14″ medium pizza, among other things.  This was Leah’s Pie ($14.95), topped with mozzarella, sausage, caramelized onions, and roasted red peppers — all things I love on a pizza.  It was cut into six wide slices instead of the usual eight most places do, and I enjoyed them for the next several days after heating them up in our trusty toaster oven.

It was a great combination of toppings, and while I can’t call it the best New York-style pizza I’ve had in Orlando (Pizzeria Del Dio holds that title, just barely edging out Paradiso), it definitely makes my Top Five.  And that is NOT meant to be a diss.  It’s top-notch pizza in my top-notch pizza pantheon.

My wife had requested eggplant rollatini ($9.95) off the appetizers menu — thin slices of fried eggplant wrapped around parmesan herb ricotta cheese and sun-dried tomatoes, topped with marinara sauce and mozzarella cheese, and baked in the oven.

She usually doesn’t care for the acidity of tomato-based sauces, but she seemed to love this version of rollatini.  And for an appetizer portion, she got three meals out of it!

Meatballs are a good way to gauge any good Italian restaurant, so I got us a side order of two meatballs ($4.95), served in marinara sauce and topped with ricotta cheese.  They had a light, airy consistency and good flavor. 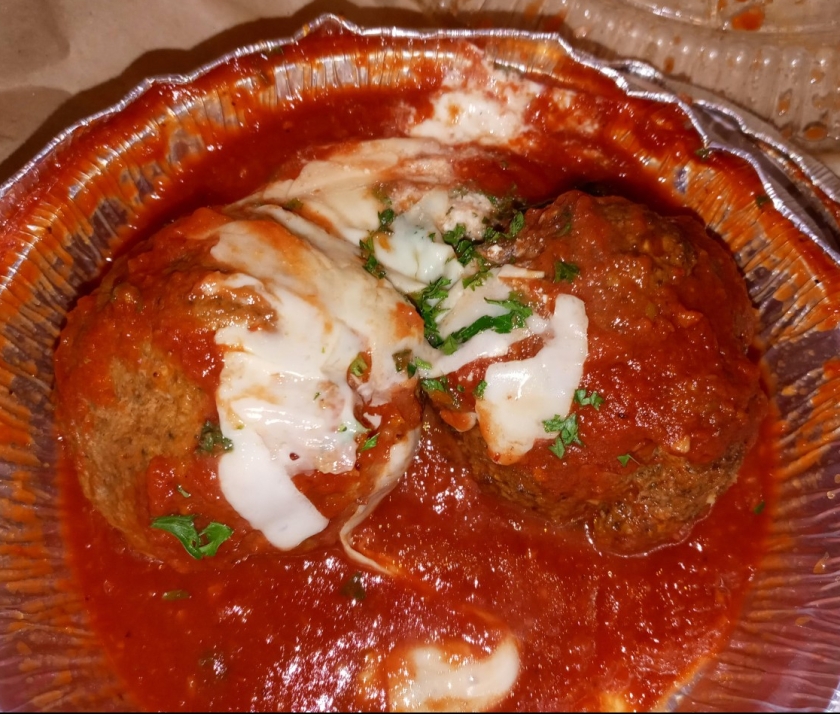 And we always like to gauge every Italian restaurant and pizzeria on its garlic rolls, so I got us an order of garlic knots too, for $5.95.  You get six knots in an order, not five, but I had already given my wife one when I took this photo:

These are probably the biggest garlic rolls we’ve had from anywhere.  They had a nice crispy, crackly exterior and were topped generously with garlic and parmesan cheese, but they weren’t as buttery as we like.  Pizza Bruno still holds the championship belt for best garlic rolls in Orlando, and it’s hard to beat Tomasino’s for sheer butteriness.

However, when I unwrapped everything at home, I was very surprised to see these soft, fresh-baked rolls in a paper bag:

They must have come with the eggplant rollatini and the meatballs, so that was a pleasant surprise, since the menu didn’t mention them.  My wife absolutely loved these, even more than the actual garlic knots!  They were kind of like ciabatta bread on the outside, but much softer and fluffier on the inside — still warm out of the oven.  Had I known these were coming, I probably would have skipped the knots.

But one thing I couldn’t bring myself to skip was the Italian sub ($10.95 for a whole).  As I said earlier, I love subs, especially Italian subs, those choruses of cured meats, cheeses, vegetables, and some kind of vinegar-based sauce on a good roll.  I’ve championed the best Italian subs Orlando has to offer: the LaSpada’s Famous hoagie from LaSpada’s, the namesake Stasio from Stasio’s, the Rocco from Manzano’s, and the Capone, that recurring special guest star from Bad As’s Sandwich.  Well, I can clearly say I have a Top Five of local Italian subs, because the one from Tornatore’s rounds out that quintet.

Forgoing ham (which can be so good when it’s good quality ham, but too many sub places use the cheap, slimy stuff), Tornatore’s Italian sub uses three of the best cured meats: salami (almost certainly Genoa salami), capicola (spicy ham), and prosciutto (one of the finest cured hams of all, especially when it’s sliced paper-thin like they do, and streaked with rich, creamy fat).  Instead of industry standard provolone cheese, they use fresh, house-made mozzarella rounds (most impressive!), and finish it off with lettuce, tomato, thin-sliced red onion, pickled banana pepper rings, oil and vinegar, and… black olives.

If I had remembered the menu says black olives come standard, I would have asked them to hold them.  As it is, I ate them on the first half of the sub, but picked them off the second half for the following day.  It wasn’t listed on the menu, but they added a pesto spread on the wonderful fresh-baked sub roll, which was crackly on the outside (but not too crackly!) and pillowy soft on the inside.  A little harder than the soft Cusano’s brand rolls at LaSpada’s, but softer than the crusty rolls at Manzano’s, it was a damn fine roll for a damn fine sandwich.

And finally, I have to

Because Tornatore’s offers onion rings ($4.95), and I’m pleased to report you get a generous order of A-list onion rings, similar to the aforementioned Pizzeria Del Dio and Paradiso.  For some reason, when Italian restaurants have onion rings on the menu, they’re almost always this really good beer-battered kind, the kind I always crave.  Sharp-eyed Saboscrivnerinos know I can never resist trying and comparing onion rings wherever I find myself, and I was very happy with these. 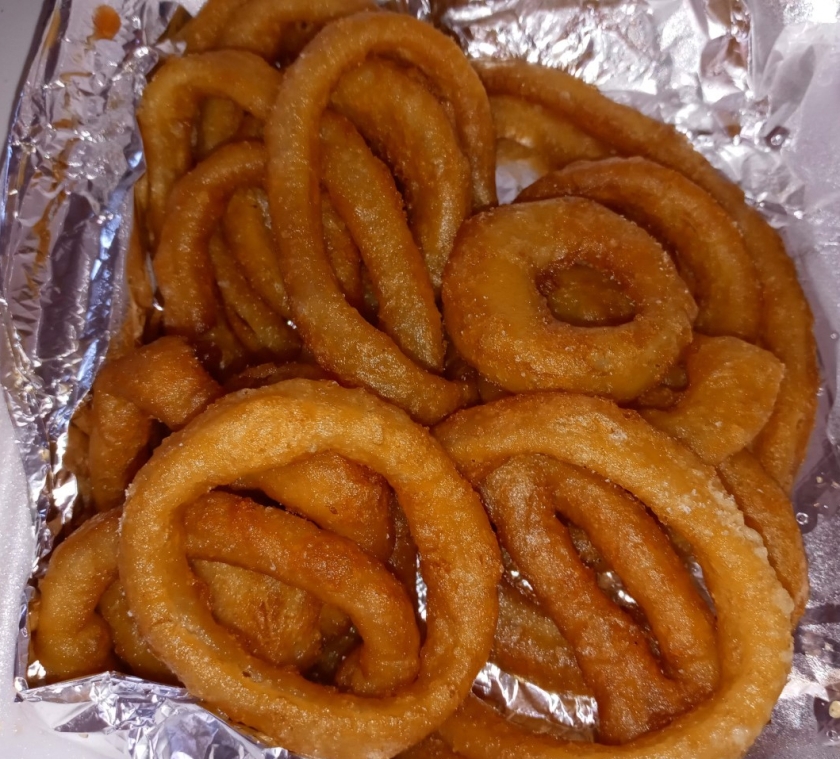 So that was my whirlwind tour of Tornatore’s.  I don’t make it out to College Park that often, but I was glad the place had ample parking, further north on Edgewater Drive from that cluster of restaurants  with minimal parking, mostly along the street.  I appreciated the efficient curbside pickup and especially the really terrific food.  I’m impressed they make so much from scratch, even those desserts I spied through two layers of glass.  The pizza was very good, but that Italian sub was a (cold) cut above.  Whenever I make it back, I’d be tempted to get another one of those, but I wouldn’t mind trying their grilled sausage, pepper, and onion sub on that same delicious fresh-baked roll, with more of that fresh mozzarella.  I’d also get some pasta next time, which is also made from scratch.