I’ve been hearing about Lawless Subs (https://www.facebook.com/LawlessSubs), a small, locally owned sub shop in Altamonte Springs, for many years.  I’ve driven by it on State Road 436 (Semoran Boulevard), about halfway between I-4 and State Road 434, countless times, but I’m never in the area during the work week, it closes relatively early on Saturdays, and it’s closed on Sundays too.  But since I love sandwiches so much, especially subs, I felt like my life wasn’t complete until I tried it, so I finally made it there on an early Saturday afternoon back in March.

Since Lawless Subs doesn’t include its full menu on the Facebook page, I took a photo of the menu to post here.  Right-click and open it in a new tab for a larger image: 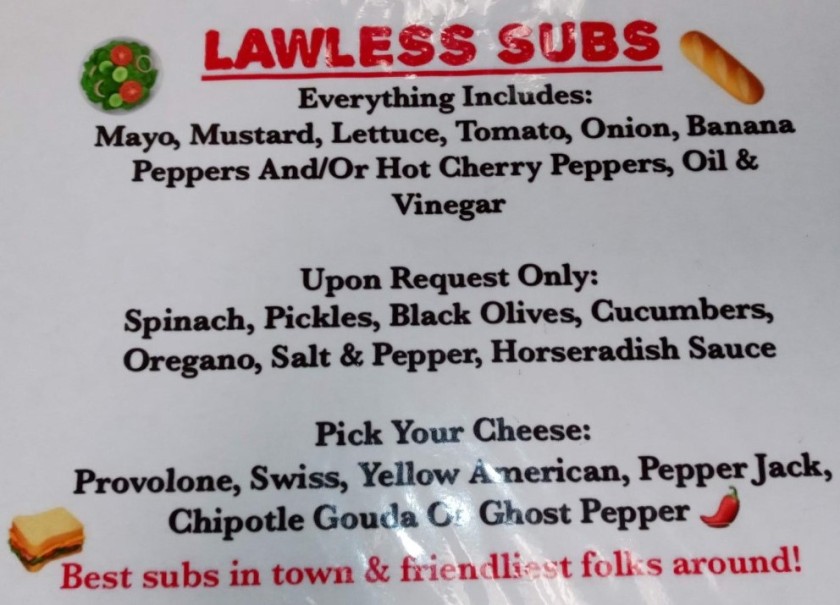 This was the large 11″ Italian sub ($8.99), with ham, genoa salami, provolone cheese, lettuce, tomato, onion, hot cherry peppers (they improve every sandwich!), banana peppers, and light oil and vinegar.  Sharp-eyed Saboscrivnerinos might know that an Italian sub is one of my favorite meals.  This was certainly a tasty sub, but I don’t think it cracked my Top Five Italian subs in Orlando (a lofty list consisting of the LaSpada’s Famous from LaSpada’s, the Capone from Bad As’s Sandwich, the Stasio from Stasio’s, the Rocco from Manzano’s Deli, and the Italian sub from Tornatore’s).  But don’t get me wrong — it is obviously a beautiful Italian sub, and it hit the spot at the time. 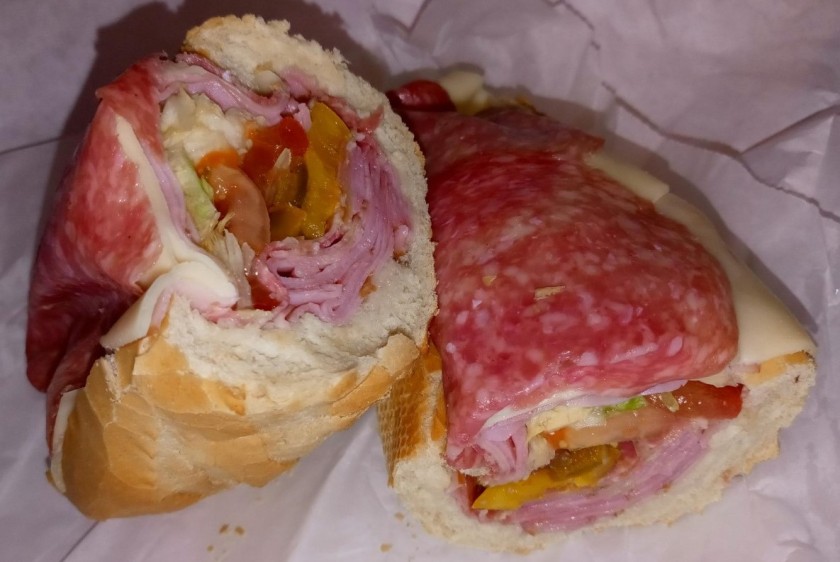 This is the smaller 7 1/2″ roast beef sub ($7.49), served cold.  (I think all the subs at Lawless Subs are served cold.)  I ordered it for my wife, but ate a little bite of it.  She usually doesn’t like subs or sandwiches in general, but she devoured it, so that’s high praise.  I would have preferred a roast beef sandwich to have some cheese, onions, horseradish sauce, and something spicy, but she definitely doesn’t like anything on her sandwiches, and this was meant for her.  I’ve had better roast beef, particularly the rare Dietz & Watson London broil roast beef that you can buy at the Sprouts and Winn-Dixie deli counters, but you have to give Lawless Subs props for being so generous with the meat in the sandwich here.  It was kind of a dry sandwich, but if I requested any cheese, onions, or condiments, she would not have touched it, I guarantee that.

So that’s Lawless Subs, a visit and a review that were both a long time coming.  I don’t know how often I’ll be able to return, but I’m glad I finally made a point of trying it.

One thought on “Lawless Subs”