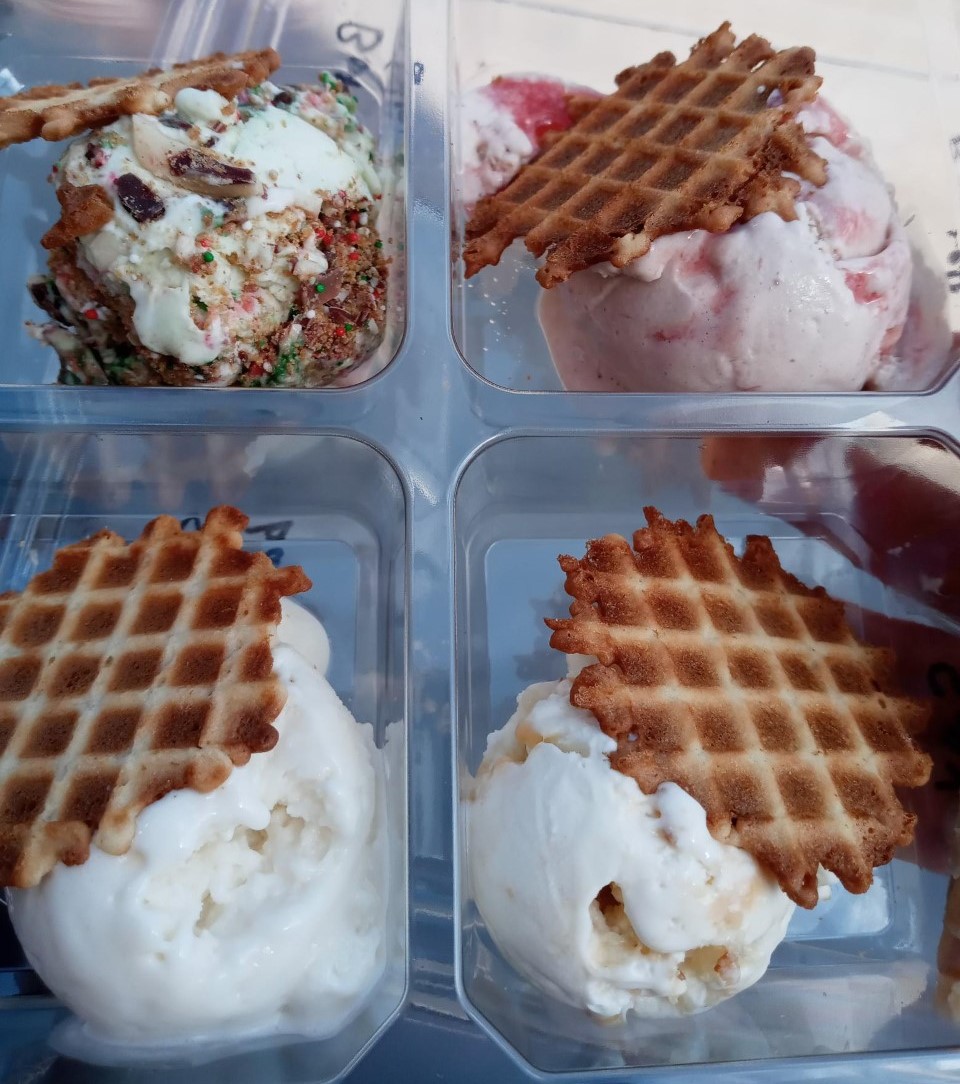 Salt & Straw (https://saltandstraw.com/) is a small chain of artisanal ice cream shops, founded in 2011 by cousins Kim and Tyler Malek in that hipster hub of Portland, Oregon.  Now they have four locations in Oregon (three of which are in Portland) and a handful in other cities known for their strong foodie culture: Seattle, the San Francisco Bay Area, Los Angeles, San Diego, two in Miami, one at Disneyland in California, and now one right here at Disney Springs in Orlando, which opened just this past Wednesday, four days ago!

Your friendly neighborhood Saboscrivner was right there on the scene, accompanied by his wife and three dear friends who came in from Tampa to join us in our decadent breakfast of ice cream.  We were the first people there when the doors opened at 10 AM, since I had read about long lines the past few days.  That’s how we roll, folks.  Get in, get out, beat the crowds, and hopefully limit our COVID-19 exposure.

It is located near the AMC Theater, Starbucks, and the Star Wars and Marvel stores on the west side of Disney Springs.  If you’re making a special trip just to try it, I recommend parking in the Orange Garage, or in the parking lot near the House of Blues and Cirque de Soleil.

We were amused by a lot of people walking by, looking at the sign, and remarking how “weird” a lot of those flavors sounded.  I think the location will do very well, because there are plenty of novelty-seekers who just love trying new things and having new experiences.  I’m certainly one of those, and we may outnumber the people who get stressed out by too many options, or put off by unfamiliar options.

This is not cheap ice cream, folks, but if you’re on Disney property, you must already realize that nothing is cheap.  But I hate a ripoff, and I’m happy to report you get what you pay for here.  Also, the patient Salt & Straw staffers will hand you spoons to sample any flavor, and possibly even every flavor if they aren’t too busy.  Since we were first, Keanna was extremely patient and gracious with us, as we sampled their wares.  I kept promising that we were going to buy a lot of ice cream after all those samples, and we certainly did!

Our one friend got a single scoop “kids” portions for $5.75, and she chose honey lavender, which she seemed to love.  I’m not a huge fan of lavender as a food flavor — it often makes things smell or taste like soap to me.  But I also tried a free sample spoonful of that flavor, and it was nice — smooth and floral, but not soapy.  Sorry I didn’t get a photo.

But the best deal, which I highly recommend, is the ice cream flight, where you can choose up to four flavors — four separate, slightly smaller scoops — in a container with four compartments to keep them from touching.  It costs $14.75, and that’s definitely the way to do it.  My wife and I studied the menu in advance, and after trying our samples, we knew exactly what to get.

This was my flight:

Bottom right: The Salty Donut guava and cheese, inspired by an artisanal doughnut shop that opened a location in Orlando a year or two back, but I haven’t been to it yet.  I’m from Miami, and I grew up eating pastelitos, flaky pastries stuffed with sweetened cream cheese and guava paste, so I couldn’t resist this combination of cream cheese ice cream, glazed brioche donut chunks, guava curd, and puffed pastry streusel.

You can see above that they serve the flights in a flat plastic container with flat lids, which makes it a heck of a lot easier to carry out of the shop, since there is no seating inside.  They are also nice enough to write the flavors on the lid, so you can always remember which one you are trying.Here they are, uncovered.  The Bottomless Limes! flavor (top left) had a lot going on — maybe too much.  But it wasn’t as citrusy or as tart as I would have liked.  The Salty Donut had a slight tartness from the cream cheese ice cream base, but I didn’t detect a single morsel of guava curd in there, and neither did our other friend, who got a scoop in his flight.  Again, I’m glad I tried both of those, but I wouldn’t get either one again.

On the other hand, the strawberry honey balsamic with black pepper (top right) was sweet, tart, and magnificent, and the roasted pineapple coconut sherbet (bottom left) was subtle, but refreshing, and I loved it.  I’d definitely recommend those.

This is my wife’s flight:

Those waffle cone “chips” are pretty amazing, by the way.  Very buttery, with a slight hint of salt, and they stayed crunchy even in the ice cream.  I had bought an extra waffle cone for the two of us to sample (just $2), but that was before I knew they threw in these waffle cone chips with the flights… and then it rolled off my container and fell on the ground, shattering.  Hopefully one of the cute Disney squirrels got to enjoy that cone.

My other friend’s flight included the Triple Tropic Twist flavor, which features “Bright mango-pineapple jelly and citrus mousse swirl through a wildly fruity raspberry sherbet.”  He let me taste that one, and it was really good too.  It had more of that tartness I always enjoy in fruity desserts.  I also really like sherbet and sorbet, sometimes even more than creamy ice cream.

And before we got served, I also sampled the Arbequina olive oil ice cream (extremely subtle and not too sweet or too strong; probably great as a palate cleanser between stronger flavors) and the Panther Coffee chocolate tres leches ice cream, featuring espresso from Miami’s popular hipster coffeehouse.  Tres leches is one of my favorite desserts, but I didn’t really taste any of that in my little sample spoonful.  I just tasted milky coffee ice cream, but really good milky coffee ice cream.

Would I rush back to Salt & Straw?  I don’t think so, but mostly because we are not really “Disney adults,” and the place is such a schlep to get out to.  But I sure love trying new things and writing about them, so I’m very glad I was able to try as many new ice cream flavors as I did, treated people I love to them too, and got to tell this tale afterwards.  If you’re at Disney Springs and are craving something sweet, absolutely check it out.  I don’t think you could possibly regret it, especially if you order a flight, as most of us did this morning.  If you get there early enough to not have to wait in a long line in the blazing heat and oppressive humidity, even better!

Also, I must note this, because I am a fan of professional wrestling and action movies: a co-worker tipped me off that Dwayne “The Rock” Johnson is now an investor in Salt & Straw, and they have released flavors inspired by his larger-than-life persona as one of the biggest entertainers in the world (figuratively and literally).  None of those were available today, but you might SMELLLLLLLLLL WHAT THE ROCK IS COOKING on a later visit to Salt & Straw, Orlando’s newest and most exciting ice cream destination.