Eataly (https://www.eataly.com/) is like heaven for foodies: a massive Italian food store that contains several restaurants, from sit-down pastarias to wine bars to counter-service bakeries to grab-and-go snack shops.  As a result, it is kind of like a massive food hall, with so much to see and do, smell and taste, experience and indulge.  But most of all, Eataly feels like a temple to Italian food — truly a place of worship — and well worth a pilgrimage at least once.  There are ten Eataly stores in Italy (the first one opened in Torino in 2007), nine in North America, and eight elsewhere in the world.   I don’t know how different they all are, since I’ve only been to the Chicago Eataly (https://www.eataly.com/us_en/stores/chicago/) — first with my wife in 2014, and again on a recent business trip to Chicago.  I had to venture back there, to make sure that first visit wasn’t just a wonderful dream, but the kind of place where dreams come true.

It had been so long since my first visit, I had to explore everything in the store before deciding on my first bit of food.  I made my way to the second floor to a familiar kiosk that beckoned: the land of cured meats and cheeses.  I felt like a weary traveler who had finally made it to my destination, yet also feeling like I was home.

Since I was just staying in Chicago for two nights, I couldn’t buy anything fresh or perishable or requiring cooking, but I’m sure some fancy Chicago locals bypass the local supermarkets and buy all their meats at this gleaming butcher’s counter.  You can’t see the price labels in this photo, but take it from me: if you have to ask, you probably can’t afford it. 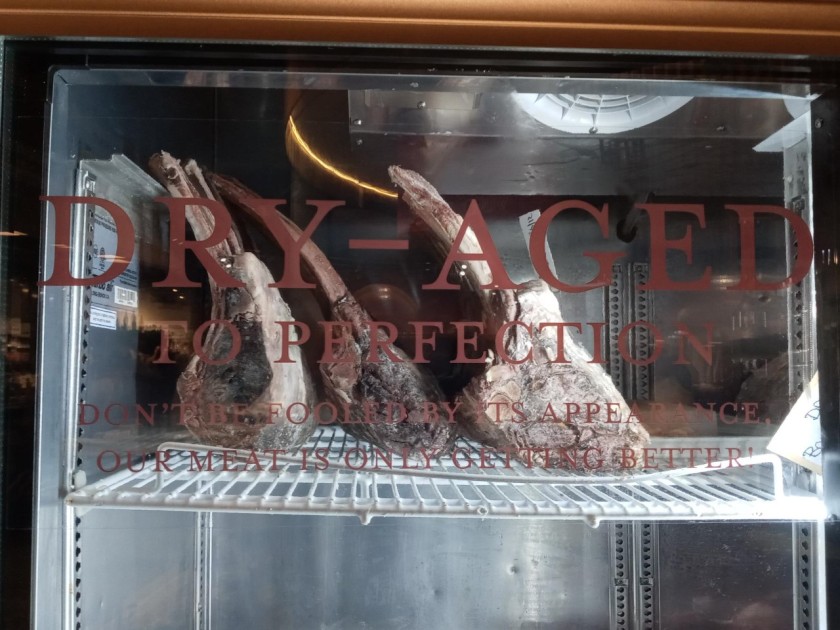 The seafood counter was equally sumptuous.  On my first visit to Eataly back in 2014, I made an indulgent purchase of bottarga here: the salted, cured, pressed, and dried roe sac of a fish (usually gray mullet, but sometimes tuna).  I had read about bottarga before, and it sounded irresistible to me, as a connoisseur of the cured, a scholar of the smoked, and a professor of the pickled.  So many cultures created their own versions of this delicacy, and I’ve still never found it in Florida.  The bottarga I bought at Eataly made it back in my luggage without any problems, and it lasted months in the fridge, as I finely grated it over so many pasta dishes.  It added a salty, savory, umami flavor to everything, and pretty much melted in my mouth.  If that sounds good and not gross, I highly recommend it. 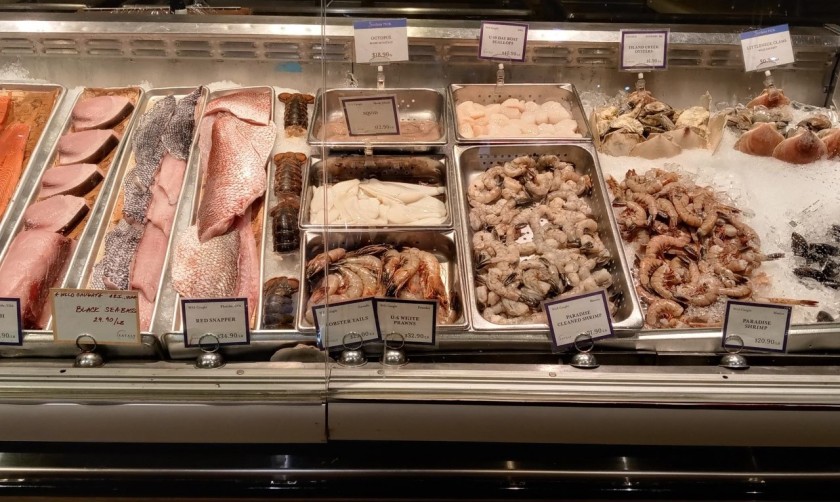 But all this browsing made me hungry, so I returned to the restaurant my wife and I dined at on our original trip to Eataly here in Chicago: the creatively named La Pizza & La Pasta.  You can’t go to a restaurant like this and not know what you’re getting!  They take reservations, but I arrived relatively late in the day, after a long training workshop and an architectural boat tour down the Chicago River, so I had my choice of seats and opted for a solitary barstool, far from any other diners.

The kind server brought out this wonderfully fresh, crusty bread with olive oil that was much sweeter and more flavorful than the kind I keep at home that regularly goes on sale at Publix.  I’m not sure if every party gets “table bread,” or if it came with the dish I ordered, but if you’re visiting Eataly, hopefully you’re not obsessed with counting carbs, so you should definitely take advantage and enjoy this brilliant bread.

As a solo diner, I knew I couldn’t justify ordering two entrees, so it was difficult for me to choose.  My server helped me break a tie, so I went with a fresh pasta dish, tagliatelle alla Bolognese ($24), topped with real-deal parmigiano Reggiano, not the shaky-can stuff I’ve bought my entire life.   The fresh tagliatelle pasta was kind of eggy (not in a bad way, just not exactly what I expected), but the savory Bolognese sauce was awesome, with plenty of chunks of meat.  I get that this was a pretty basic choice, and I make “pasta and meat sauce” quite often at home, but it is real comfort food for me, and I wanted to see how Eataly’s kitchen would present such a timeless classic.  They knocked it out of the park, needless to say.

As an aside, here’s a photo I found of the dish I ordered here back in 2014, in those pre-Saboscrivner days: my favorite pasta dish anywhere, bucatini all’amatriciana ($21).  This thick bucatini pasta (long, hollow tubes) was not fresh like the tagliatelle I had just tried, but there’s nothing wrong with good quality dried pasta.  I think I prefer it, in fact.  All’amatriciana is served in a spicy tomato sauce with guanciale (cured pork jowl), and this version from La Pizza & La Pasta was perfect in every way, even better than the tagliatelle from this most recent visit. 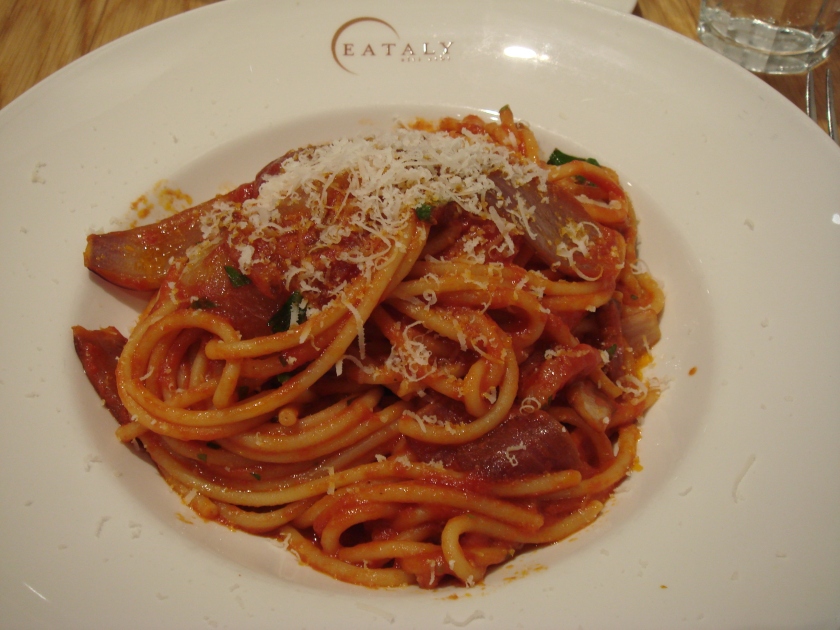 I make pasta all’amatriciana at home as a treat once or twice a year, but since guanciale is hard to find, I usually substitute cubed pancetta, which you can find at Trader Joe’s, Publix, and even Aldi sometimes.  If you’re not into bucatini, pretty much any other pasta works well, except for weirdo choices like tri-color wagon wheels.  What is the deal with those, anyway?

After dinner, I wandered around the store a little more and gazed at beautiful Roman-style pizzas on display at the Pizza alla Pala kiosk.  I was tempted, but I had just eaten dinner, and I knew they wouldn’t be that great eaten cold in my hotel room the next morning.

But I saw these gorgeous foccaci farcita sandwiches, with cured speck ham, provolone, and arugula on fresh focaccia bread, and I thought “One of those would be awe-inspiring eaten cold in my hotel room the next morning!”  Maybe because I got to Eataly relatively late in the day, they charged me a much lower price for the to-go sandwich than what you see pictured, more like the price of an individual slice of pizza. 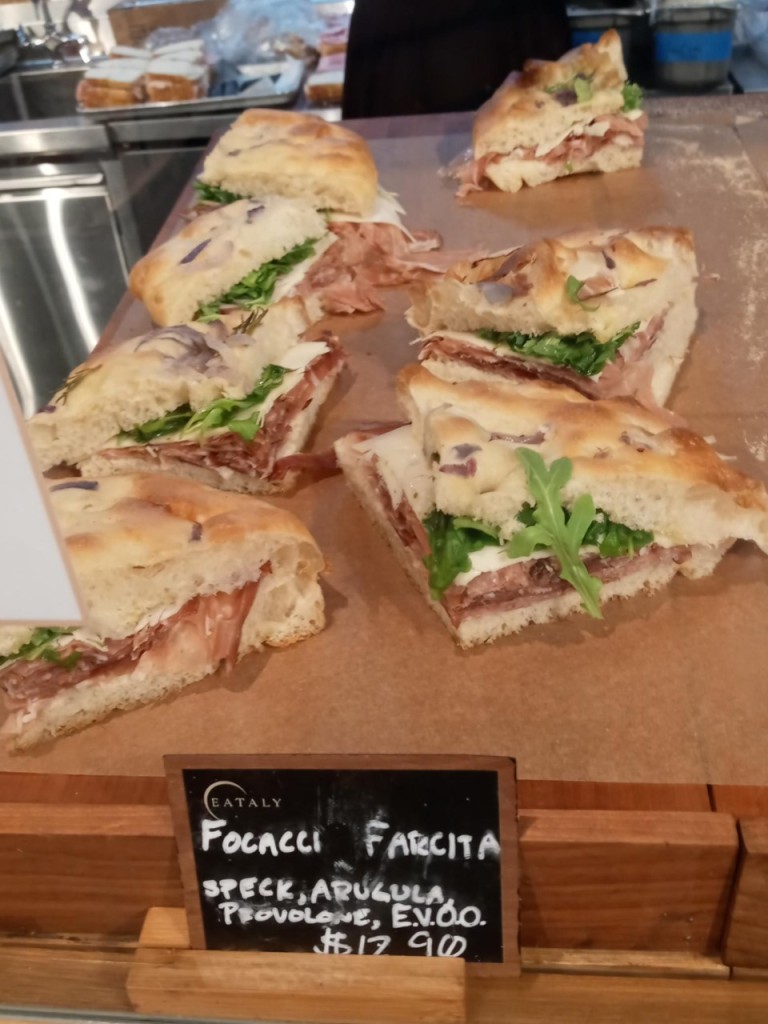 Here’s an extreme close-up of the lovely sandwich.  Speck is very similar to prosciutto.  I could tell they brushed some olive oil on the bread, but I thought a tangy vinaigrette of some kind would have really put it over the top.  (But I think about that with most sandwiches.)

And to go with my beautiful Italian breakfast, I found an Italian brand of potato chips, San Carlo la Vita e Buona, with a flavor that was too interesting to turn down: mint and chili pepper!  If I recall, this bag was under $3.  Since I love trying new potato chip flavors and reviewing them in this very blog, I felt obligated.  I did it for YOU, stalwart Saboscrivnerinos!

San Carlo was a bit stingy with the flavoring, a marked contrast against many American chip manufacturers that really cake it on there, but they tasted very fresh and potatoey, and the mint subtly shined through.  They were barely spicy at all. 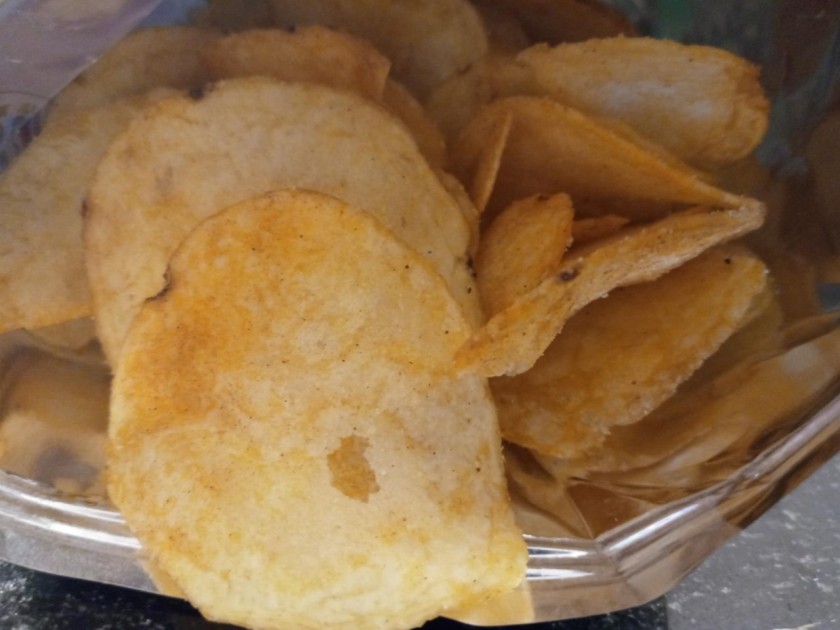 I also brought home a salami from the cured meat counter that sounded amazing (elk, pork, and dried blueberries?!), but it wasn’t worth the price I paid.  I would have loved to try so many more things at Eataly, but again, I was limited by what I could safely store in my hotel room and bring back in a carry-on bag, with TSA’s continuing rules banning liquids.  That said, if you ever find yourself in a city grand and lucky enough to have its own Eataly location, I implore you to make that pilgrimage and try it for yourself.  You will be tempted by all sorts of treasures, and it is just a pleasure to wander around and explore, treat yourself in one of the many restaurants, and bring back mouthwatering mementos, succulent souvenirs, and tasty trophies from your travels.