My wife and I were recently driving through College Park, a nice Orlando neighborhood near downtown, full of really terrific restaurants.  We hardly ever make it down there, and I’m not even sure why we were in College Park this time around.  But traffic temporarily stopped in front of Jaber (https://www.facebook.com/jaberorlando/), a restaurant on Edgewater Drive displaying a big banner advertising Lebanese cuisine, with huge color pictures of tempting, tantalizing shawarma wraps.  We looked at each other and decided to pull over and stop in for lunch — a rare moment of serendipity, without reading reviews or online hype or studying the menu in advance of our visit.  Sometimes you have to take a chance, especially when it comes to lunch.  YOLO, am I right?  (Did I get that right?)

Looking through the unique menu at Jaber, I realized it was a Lebanese restaurant with a Brazilian twist, with multiple locations in Brazil.  This was going to be an interesting fusion feast.  We started out with some esfihas, which are small Lebanese pastries.  The menu listed open esfihas that look like petite pizzas, and closed esfihas that are more like little pockets of dough, pinched closed in a variety of pretty shapes, and baked.

The open beef esfiha in the bottom right corner above ($2.49) was indeed like a wee pizza, minus cheese.  My wife ordered the folded spinach esfiha ($3.49), the triangle in the top left, that was just like the delicious spinach pies I used to enjoy so much at Gyro Plus and Falafel King back in Gainesville, over 20 years ago, and much more recently at Tony’s Bakery here in Orlando.  As much as I like Greek spanakopitas on thin, crispy, flaky phyllo dough, I always prefer this Lebanese style spinach pie enveloped in warm, soft, chewy dough.  Jaber’s folded spinach esfiha was much smaller than the one from Tony’s Bakery, but it was still warm and soft and chewy and fresh, with the cooked spinach so well-seasoned inside, with garlic, lemon, and possibly even nutmeg, among other savory flavors.

My wife’s favorite, however, ended up being the folded sausage esfiha that I ordered ($3.49), the tempting pinched pastry in the bottom right of the above photo.  It was stuffed with crumbled calabresa sausage (which I first encountered at another local Brazilian restaurant, Mrs. Potato) and olives!  That was an interesting choice that she just loved.  The soft dough was my favorite part, so I’m glad we split that one.  And finally, in the top right of the above photo, we have a fried kibbeh ($3.49), the lemon-shaped fried shell of cracked wheat with crumbled, seasoned ground beef and minced onions inside.  I liked this one more than she did because it was so oniony.

I am always up for anything with lamb, so I went with the lamb shawarma ($17.89) — a thin wrap (more like a lightly-grilled tortilla than the fluffy, puffy pita bread I’m used to with gyros) stuffed with thin slices of seasoned lamb, lettuce, tomatoes, onions, and tahini sauce, like a Lebanese burrito.  It was tasty, even though I prefer the huge gyro from Mediterranean Deli that is around half the price.

The lamb shawarma came with fries which were similar to McDonald’s fries, but could have used a lot more salt.  I was really hoping for better fries, on par with Mrs. Potato, but those were some of the best fries I’ve ever had.

I was able to resuscitate these fries by shaking a liberal amount of this “Chef’s Sauce” onto them.  It was a delicious hot sauce that definitely breathed some life into them.  I asked our server Bella what was in the hot sauce, and if they sold bottles of it.  She came back with “peppers and garlic,” and a bottle was $11.  Sorry, I think that’s way too much to pay for a bottle of hot sauce, even though it was good.

This was the Syrian rice ($7.50), one of several different international rice dishes on the menu.  It sounded the best for sharing — rice and angel hair pasta, fried in butter, kind of like a rice pilaf from heaven.  Some Turkish restaurants serve a similar buttery rice, and we both ended up loving it. 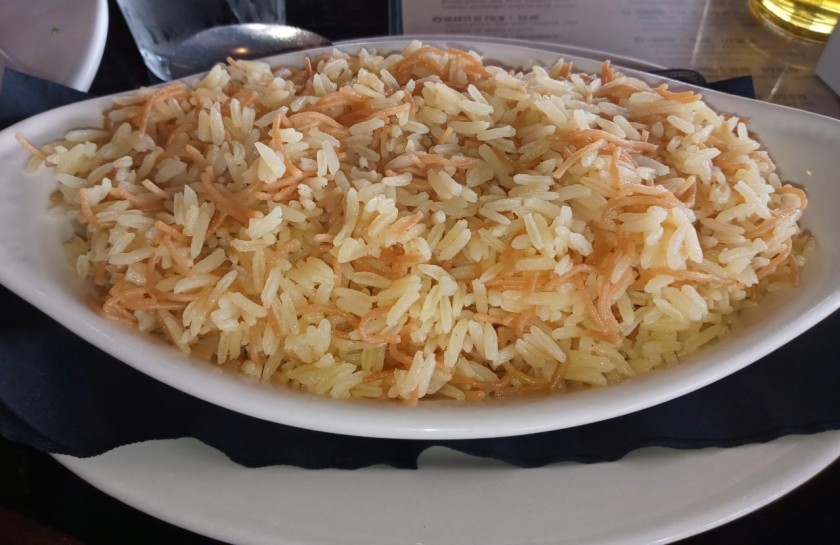 My wife was feeling overwhelmed by the large two-page menu in a new restaurant, but it was an easy choice once I pointed out the combo meals.  She loves steak — far more than I do, far more than most men do — so she chose combo #7 with picanha ($17.99), a thin-sliced Brazilian steak, reminiscent of Cuban palomilla steak and Argentinian churrasco, if that helps place it in context.  Unlike those, picanha is served with the fat cap attached.  It was seasoned with garlic and herbs, and it arrived sizzling.

Her picanha steak combo came with even more of the unsalted fries, a mound of white rice, and a cup of stewed red beans.  This was so much food, we brought these fries home along with the rice and beans, and I ate everything over the next couple of days, doused with some hot sauces from my own collection.

My wife also ordered a cappuccino with Nutella around the rim ($5.79), which would have been a great dessert, but she asked for it at the beginning of our meal and sipped it throughout.  It was messier than she expected, with the thick, sticky Nutella around the rim of the cup, but she did what she could to scrape it in and stir it into the cappuccino.  I didn’t try this, but she liked it, and how could it not be great? 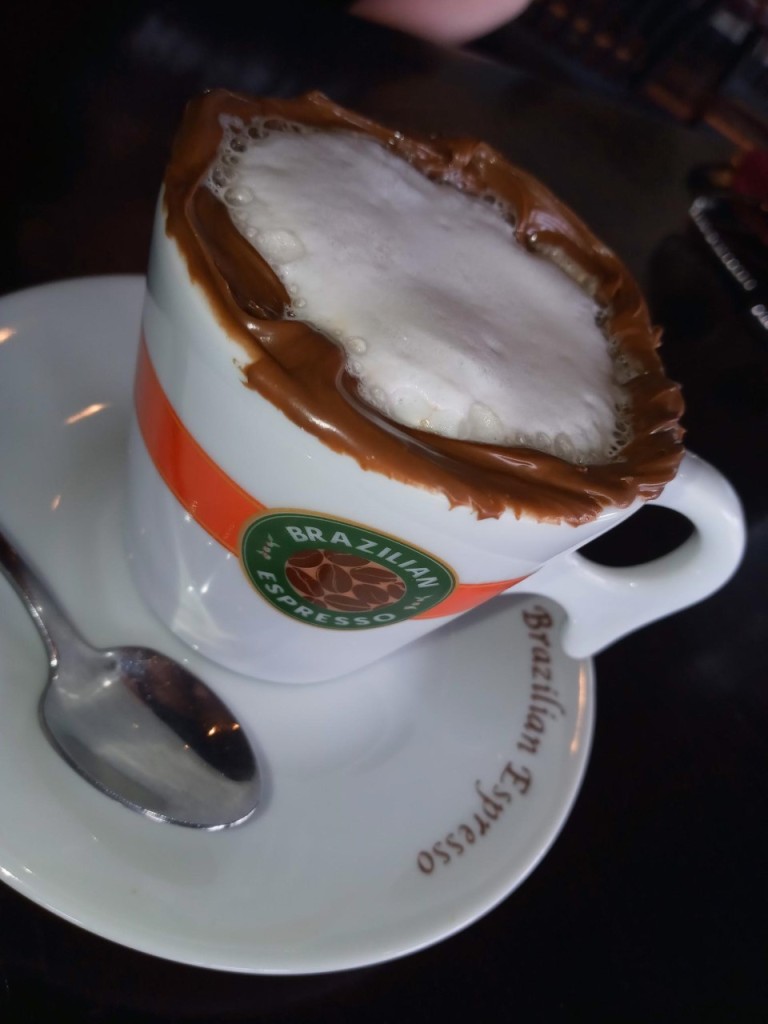 I honestly don’t know when we will return to Jaber.  It’s in a part of Orlando we rarely venture out to, and even though our food was good, I thought it was kind of pricey for what we got, compared to similar dishes we like from elsewhere.  The esfihas and the rich, buttery Syrian rice were definitely our favorite parts, and I would still recommend it for anyone located closer to College Park, Winter Park, or downtown Orlando looking to try one of Orlando’s more interesting fusion restaurants.

One thing that would bring me back would be their All You Can Eat Esfihas offer for $19.99 (plus tax and tip, of course), on Tuesdays from 4:00 to 10:00 PM and Sundays from 12:00 to 4:00 and 5:00 to 10:00 PM.  I really did like the esfihas we got, and I wanted to try others from the long list of options.  Plus, they are small, and I have faith in myself to know I could put A LOT of those away and more than get my money’s worth on a future visit.  The Jaber Facebook page posted about the all-you-can-eat special back in February and said you have to make reservations.  I don’t know if they are still running this special, but it would definitely be worth investigating.  If I see you there, it will probably be on one of those days!